I decided to write my essay on the topic of women in prison. I chose to not only write about the way of life of these women after being convicted, but also the very real and serious issue about pregnant convicts. “according to the Women’s Prison Association 5,000-10,000 women enter prison already pregnant each year”(Lynch, 2007, para 4) Correctional facilities are an important venue for providing pregnancy-related care, including access to abortion services.. The departmental of justice expressed that 70% of all women who enter prison are mothers already.

Don't use plagiarized sources.
Get Your Custom Essay on Women in prison Just from $13,9/Page

Society has to consider that we are not only locking away these women but in some cases locking away innocent children as well.

There’s controversial programs that enable pregnant women to care for their child after birth in the prison. Are these beneficial for society? Some say yes, some say no. (Incarcerated women and abortion provision: A survey of correctional health providers.),(Putting a human face on prison statistics)

Incarcerated women are said to be poor, uneducated, and limited for job opportunities.

More than half the women incarcerated are unemployed. 46% of women prisoners are African American, and 12% are Latina Americans. 85% of mothers had custody of their children before incarceration. Many of these women are involved with drugs. A survey conducted by the National Institute of Justice in 1993 found that the majority of women interviewed tested positive for illicit drugs, regardless of the charges they faced. Most of the women have been medically underinsured before their incarceration. (Improving Pregnancy Outcome during Imprisonment)

It is said that only a few of U.S. prisons offer an in-house nursery program like the one in the Ohio prison. The convicts must be nonviolent offenders who arrive at the prison pregnant or with small children already. They also must be serving relatively short sentences to qualify. The Achieving Baby Care Success program started in June 2001. The 12 mothers that participated lived in a special wing of the prison. The babies slept in cribs next to their mothers bed. Mothers would take their children to the
in-house nursery for scheduled activities. Their ultimate goal, says warden Sheri Duffey, is to keep the next generation out of prison. (In Ohio, Inmate Mothers Care For Babies In Prison)

There’s a program called “Women in Prison” that supports the women affected by the Criminal Justice System (CJS). They are an organization that assist the women by giving them advice. Advice on housing, education, mental health, legal rights, work options, health benefits, debt resolution, domestic violence, and more. They believe that prisons causes damage and disruption to women, most of whom do not pose a risk to the general public. They believe women have been and are made to conform within a justice system designed by men for men. Women lose their homes, their relationships and sometimes their mental health in the process. The organization believes using community based alternatives would reduce the need and use of prison. They believe the best way to help women offenders is to deal with the root of their problems. (Women in Prison)

I believe these programs could be very beneficial to pregnant inmates. Many of the women that eventually leave prison find it too difficult to take life “cold turkey.” It is said that in many aspects the inmates are in fact worst when leaving prison because they’ve suffered emotional and physical damage. According to the women in prison book, inmates receive 68 dollars upon leaving, that kind of money just wont cut it for a woman to not only raise a child but care for herself as well. (Women in prison pg 96),(In prison societies)

Women in prison. (2016, May 28). Retrieved from https://studymoose.com/women-in-prison-essay 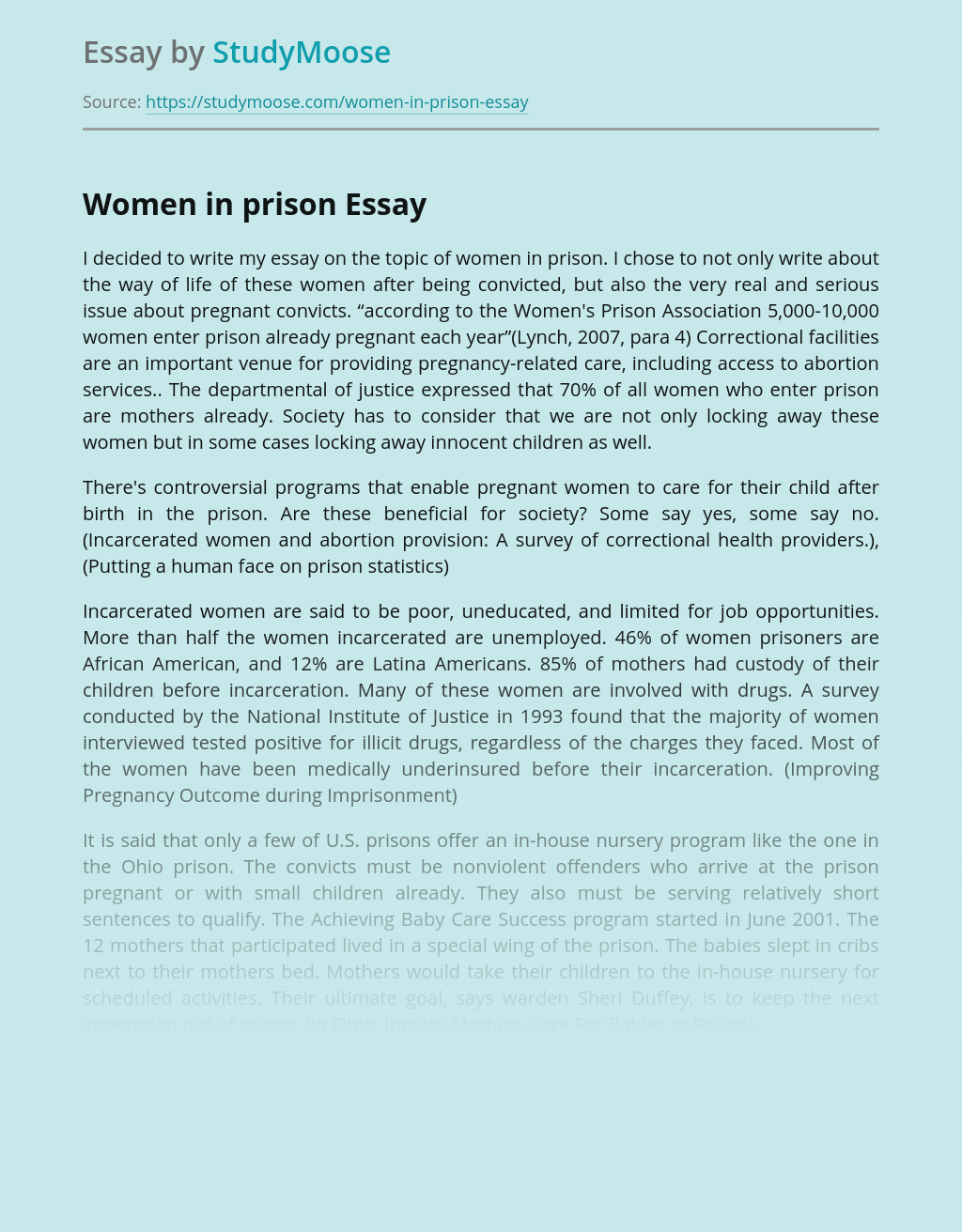 I decided to write my essay on the topic of women in prison. I chose to not only write about the way of life of these women after being convicted, but also the very real and serious issue about pregnant convicts. “according to the Women’s Prison Association 5,000-10,000 women enter prison already pregnant each year”(Lynch,...

Oct. 18, 2001 Thesis Private prisons can be a profitable and secure alternative to government run Statement prisons. Private prisons are able to be profitable by controlling the administrational cost of operating the facilities. At the same time, they must adhere to high governmental standards to maintain the right to operate. Background As a nation,...

Three inmates could be released from prison today. Two of them will end up right back in the system within three years. This statistic should be enough to conclude that America’s prison systems are failing miserably with the rehabilitation of inmates. How is it plausible for every correctional facility to think isolation, segregation, and overcrowding...

Abstract The criminal justice arena is made up of law enforcement, courts, and corrections and is vast as well as it is its own environment when referencing the leading or management of special groups. Numerous components within the criminal justice realm require team cooperation to be successful. In the law enforcement branch organized special groups...