Coco Chanel once said, “Fashion is always of the time in which you live. It is not something standing alone. But the grand problem, the most important problem, is to rejeuvenate women. To make women look young. Then their outlook changes. They feel more joyous (Bio.com, 1993).” I want to write on Coco Chanel particularly because of her everlasting contributions to the women and men’s fashion industry in our patriarchal society. Without her contributions, women will not be able to have as much freedom in fashion, attitudes, and in body expressions.

Coco Chanel was one of the very first woman to inspire the women’s fashion industry throughout her life and until now in the twentieth century. Coco Chanel was born in August 19, 1883, in Saumur, France as Gabrielle Bonheur Chanel. Coco’s mother died few years after her birth and since her father worked as a peddler and had little money to raise her, she was put in an orphanage (Bio.

Proficient in: Women's Role In History

com, 1993). Coco was taught by nuns in the orphanage to sew, which was a skill that brought her to fashion. At age 23, Coco started her career as a singer and got the name Coco as a stage name, which she later is known as (Bio.com, 1993). In 1910, Coco met two men and had relationships with both.

Both men helped Coco started her fashion career by offering monetary assistance. Finally in 1913, “Coco opened her first shop in Paris selling hats (Bio.com, 1993)” and later added two stores selling clothes. Though Coco first started her shop in 1913, around the time when the World War I broke and all the fashion were focused on men and uniforms, Coco wanted to took pride as a woman designing for other women, so she designed women’s clothes inspired by men’s wear.

She wanted to give women of her time a chance to have personal attitudes and styles buying and wearing high quality yet affordable clothes in a patriarchal society. Fortunately, Coco’s own lifestyle was able to fuel her with ideas of how modern women everywhere should look, act, and dress. She was an icon not only for many women but also many men during her time. Unfortunately, due to the economic depression and the WWII’s negative impact on her shops, Coco had to close down her company (Bio.com, 1993). During the time her company was closed, Coco was criticized for having a relationship with a Nazi officer, which led her to left Paris for Switzerland (Bio.com, 1993). A year before her death on January 10, 1971, at age 70, Coco made a triumphant return to the fashion world despite of all the critics by men. She believed that “her feminine and easy-fitting design would win over shoppers around the world (Bio.com, 1993),” which didn’t disappoint her until today. Even until now in the twentieth century, she’s still an image of how modern women should be like. Coco Chanel, without doubt, contributed to the femininity in both women and men’s fashion. In this paper, I will address three things; fashion and history, fashion and gender, and fashion and Coco Chanel. I will first start this paper by addressing clothing and gender and how does that affect fashion. According to our society’s shallow definition, often we think different items of clothing are suited with different gender, which relates to gender roles and responsibilities. We had also discussed about this in the early childhood socialization chapter and also gender roles. If we look back in history, men were believed to be the ones who set up gender in clothing.

It was believed that by setting up gender in clothing, men could assert their power over men and women. For example, “wearing skirts would handicapped and impeded women in their movements and thus were inferior (Bio.com. 1993).” These allowed men to be superior and take their roles as the head of their family; men were expected to wear trousers and women were expected to wear skirts and stay home to take care of children and cook food for their husbands. “Men used clothing to demonstrate male superiority, giving men greater mobility while hampering female movements (Langner, 1991).” After discussing gender and clothing, I would like to talk about how that affected fashion and femininity in Victorian fashion. During almost the end of the 19th century, before the fashion revolution in the 20th century took place, Victorian fashion has flourished. “Women were demanded to wear tight corsets, bodice, layered hats, undergarments, gloves, parasols, and voluminous skirts (Bio.com, 1993).” If you were women from the lower class, then you had choices to not dress up in these garments due to limited money. However, if you were women from the higher-society, you were forced to dress up in these exaggerated Victorian style clothes to appear feminine. The truth was that these garments were not only heavy and painful to wear, they also made women drench in sweats. The most tormenting piece of garment in that era was the corset, which must be laced up into the body so tightly that many women failed to breathe and eat properly and fainted (Bio.com, 1993). Women had no freedom defining the word femininity, but only to follow the big breast, tiny waist, and wide hips rule defined by men (Evoscience). Unfortunately, the corsets were what can accentuate those body parts in the definition. After discussing gender and clothing and Victorian fashion in the late 19th century, I would like to talk about Coco Chanel’s change to the femininity in fashion. It was Coco Chanel, a French fashion designer of the brand Chanel, changed the world of fashion for women of her time and until now in the 20th century. Coco Chanel stated once, “Luxury must be comfortable, otherwise it is not luxury (Bio.com, 1993).” Coco believed that women could appear sexy and respectful in simple and comfortable clothing, not those ones that make you faint breathless (Bio.com, 1993).

Therefore, she started by introducing the androgynous look for women by designing trousers for women, which can be worn in public. “Coco also turned men’s suits into collarless suits for women, which allowed women to feel more equal to men that wore suits in public (Bio.com, 1993).” On top of that, she designed striped shirts inspired by horizontal striped shirts traditionally worn by sailors and fishermen (Bio.com, 1993). It was Coco’s enthusiastic indulgence in her sporting life that fueled her designs originally worn only in these masculine sport activities (Vaughan, 2012). This also provided women a chance to become equal to men in sports fashion and in sports activities. However, on top of all these androgynous designs, she wanted to also change those already-existing female designs into comfortable designs. Coco introduced the little black dress, a timeless design, altered from Victorian dresses to fit comfortably around the body without tight corsets. On top of all her revolutions in clothing, she also introduced a perfume for women named after her. It was the first perfume ever named after a woman. Coco Chanel created timeless fashion revolutions in women’s history that lasted until today. Though throughout Coco Chanel’s life, she depended on men’s support in terms of love life, money, and business like a lot of women, but she wanted to give herself and other women a chance live freely out of men’s control. Therefore, “she rebelled against the entire history of world’s fashion and changed the definition of femininity (Bio.com, 1993).” Throughout Coco’s fashion career, she reformed women’s dresses, designed women’s clothes inspired by men’s clothes, and provided women a chance to be equal to men in the patriarchal society (Bio.com, 1993). Women inspired by her, in her time and now, are and were able to have more opportunities in daily life and professional life. Boyish look was a product of Coco’s revolution. Women now can appear normal wearing traditional men clothes such as trousers, suits, ties, and shirts. This tells men that women can be as superior as men, and inspired women to speak out freedom, self-respect, and equality. Coco not only inspired women in fashion but she also inspired women to work for success without fear. Coco Chanel once said proudly, “Women must tell men always that they are the strong ones. They are the big, the strong, the wonderful. In truth, women are the strong ones (Bio.com, 1993).” Coco Chanel, without a doubt, was and is a timeless icon for women. 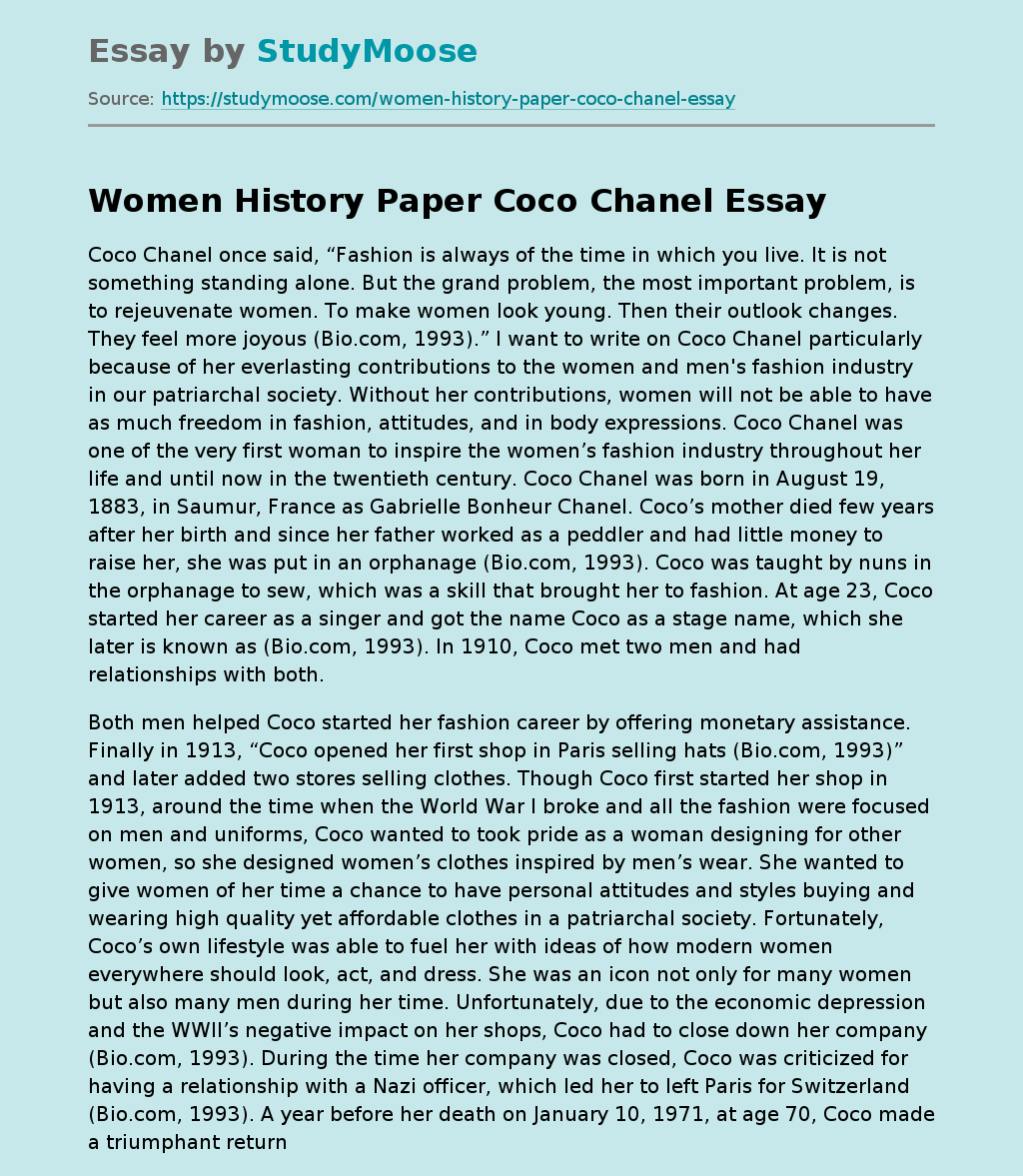