Belgium became independent from the Netherlands in 1830; it was occupied by Germany during World Wars I and II. The country prospered in the past half century as a modern, technologically advanced European state and member of NATO and the EU. Tensions between the Dutch-speaking Flemings of the north and the French-speaking Walloons of the south have led in recent years to constitutional amendments granting these regions formal recognition and autonomy.

Belgian Development Cooperation regards gender equality as a transversal topic and is determined to speed up progress in this domain by supporting its partners’ efforts to make tangible headway, in keeping with their international commitments and their development strategies and policies.

Turn in your highest-quality paper
Get a qualified writer to help you with
“ Women Empowerment in Belgium ”
Get high-quality paper
NEW! AI matching with writers

To this end, the strategy adopted by Belgian Development Cooperation takes gender equality on board in its policies, strategies and actions – this being a gradual, long-term approach – and also finances specific actions designed to fight discrimination against women, guarantee them access to opportunities for development and safeguard their rights. Our attention is focused on three key domains:

-the application of UN Security Council Resolution 1325, adopted in 2000, on “women, peace and security”, including attempts to combat sexual violence against women; -education for girls and training for women (literacy, vocational training); -the economic empowerment of women.

The Commission on Women and Development is a consultative body that advises the Directorate-General for Development Cooperation on matters relating to gender equality. It was created by the Royal Decree of 14 December 1993, which was amended on 3 June 2007.

Policy lessons to improve gender equality in education OECD countries: – Encourage parents and teachers to raise self-confidence and motivation among girls to pursue interests in science and mathematics. – Gear curricula, teaching material and training policies to avoiding gender stereo-typing, and encourage girls to engage in STEM-studies. – A better balance in the gender composition of teachers and the endorsement of female role models in professions typically dominated by men might also contribute to this objective.

– Support research to further explore which factors shape gender differences in the choice of field of study. In the past few decades, women have been entering the labour force in greater numbers and have been staying employed longer over their life course. Increased educational attainment rates amongst women have contributed to greater employment rates, better earnings and career progression in many OECD and non-OECD countries as well. Nowadays, in OECD countries new female entrants in the labour market have comparable and often higher education than their male counterparts.

1975 brought about the “UN Declaration of the Decade of Women”. Henceforth, women and gender issues were given importance and attention, with bodies such as the Commission of Status of Women, UNDP and other NGOs working diligently to bridge the gender gap. The UNDP produced the Human Development Report in 1995 to highlight the gap between men and women. The Millennium Development Goals were established in 2000, following a summit, which lists 8 goals to be achieved by 2015. These goals were to encourage development and socio-economic conditions throughout the world. Goals number 2 and 3 were targeted towards women as it aimed to increased literacy and gender equality while empowering women.

(What I encourage delegates to do is distinguish between education and literacy; both are equally important but may be different in terms of discussion. Think about literacy in terms of academics, but education in terms of awareness of rights, health, etc.)

Gender Mainstreaming: A new concept was developed after the 1995 Beijing Conference on Women. This was the fourth world conference and was a forum to discuss what actions could be taken in order to improve women status. What was realized during this conference was that in order to encourage equality, “gender mainstreaming” must take place. This concept developed the strategy to integrate women and their needs in to policies. It allows the development of legal frameworks and promotes the rights of women in various different fields. The UNDP is the agency which has been dealing with the concept of social inclusions and developing programs that enhance the status of women. The Economic and Social Council passed Resolution E/1997/66 to create a framework to address and combat all issues relating to women. UNICEF has been working towards raising awareness of the benefits of gender equality to society and the economy.

The UNICEF has also recommended an integrated approach to bridge gender gaps in education. They have proposed the abolishment of school fees, investment in teachers and promotion of education in order to be closer to achieving Millennium Development Goal 2 and 3. United Nations Population Fund (UNFPA) has been working on the reduction of the gender gap through education. They have developed programs in Jamaica, Bolivia, Mali and Mauritania to name a few. These programs promote literacy and health awareness and aim to increase retention rate amongst girls. They also aim to equip their students with a range of skills that would increase their employment opportunities.

– Discuss culture and its impact on women;
– Develop awareness of women’s empowerment among the men;
– Target women and to create all women’s classes in order to help women to develop their critical and analytical skills; – Use the Mother Tongue in educational facilities;
-The need to set up Community Resource Centers in order to create a permanent learning environment; – Develop an equivalency system with the formal system;
– Set up a working group composed of literacy providers from civil society and government to coordinate the work and discuss policies and strategies for the Non Formal sector of Education. – Enact and enforce labor laws that ensure equal opportunity and pay equity. – Conduct social mobilization campaigns aimed at increasing women’s and girls’ status and value in society. – Promote legal reforms that ensure women and girls have equal protections and rights with regards to family law, citizenship, property ownership, political participation, inheritance, and the financial sector. – Provide leadership training for women.

– Promote infrastructure enhancements that encourage economic growth, reduce poverty, improve families’ health and well being, and ease the burden on women and girls. – Develop programs to remove implicit or explicit barriers to women’s participation in non- traditional sectors, including targeted recruitment, training, and support initiatives for women. – Ensure that gender concerns are identified and addressed at the highest level of politics and public policy. – Recognize that there are myriad entry points for addressing gender inequalities, which include enrollment policies and practices, curriculum relevance, teacher deployment, learning environments, security, new technologies, and resource allocation. – Ensure that gender concerns are identified and addressed in activities focusing on global issues such as HIV/AIDS and education in emergencies or post-conflict situations.

– Analyze how specific educational programs and policies impact girls and boys differently, taking into account different roles, responsibilities, needs, and interests and address them during the project design process. – Integrate gender awareness components into pre- and in-service teacher training. – Incorporate gender considerations into activities to develop curricula and learning materials. – Identify and report on indicators such as girls’ and boys’ net and gross enrollment, gender parity in enrollment, equality in educational outcomes, and girls’ and boys’ completion rates. – Make interventions for girls more effective by integrating them into a coherent overall strategy for education reform. – Develop practical tools to support programming staff in designing, implementing, reporting on, and evaluating programs that address equitable access and quality from a gender perspective.

WHAT THE RESOLUTION MUST ADDRESS

-Next generation will be empowered because of her.

-If woman will be empowered she will not be a burden on anyone.

-Financial burden of man can be shared with her support.

-Family can be more strong because of both working hands.

-When financial problems will be shared then result of conflict 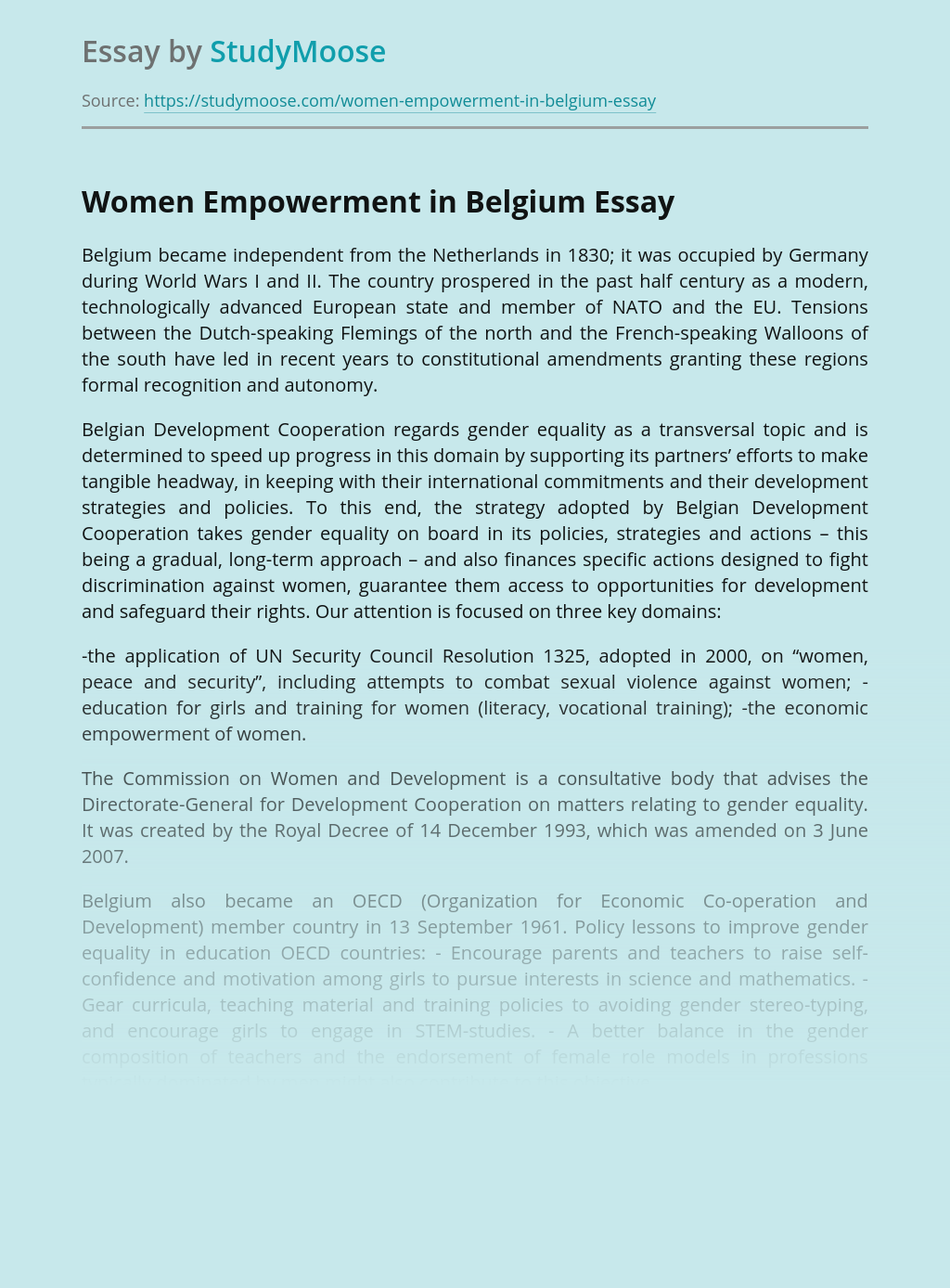 Turn in your highest-quality paper
Get a qualified writer to help you with
“ Women Empowerment in Belgium ”
Get high-quality paper
Helping students since 2015
Stay Safe, Stay Original