Women and Minorities in Law Enforcement

Throughout policing history women and minorities have played roles in the equality opportunities in the workplace legislation. During the Nixon Administration the federal government began to push employers on obtaining a good faith effort to employ women and minorities and track to their progress. In 1969 the act “Executive Order” was passed by President Nixon which stated that the federal government could not use sex as a requirement for hiring which changed policing within the Federal Bureau of Investigation and municipal police departments.

Don't use plagiarized sources. Get your custom essay on
“ Women and Minorities in Law Enforcement ”
Get custom paper
NEW! smart matching with writer

To improve and enhance the police community relations in minority communities, it was important to increase minority police officers in the law enforcement. Minority police officers have increased in modern times due to immigration obtaining an officer that can speak other languages has proven to be useful to police departments. The increase of policewomen officers was important to improve police community relations in the communities after the civil rights movement. During World War two, the number of women in the police force also increased.

Additionally, women and minorities are now treated with more fairness within their respective forces, compared to how women used have to use the same locker room as men rather than having their own. How this role change affected modern policing agencies: This role change has affected modern day policing by making the environment more diverse rather than dominated by officers who are white males. A diverse police population lends itself to the diverse culture needs of America.

This leads to safer conditions for all officers when the viewpoint of one familiar with a given environment may be taken into consideration. In U. S. policing there is typically a state police force, but crimes are usually handled by local police forces which usually only cover a few municipalities. National agencies, such as the FBI, only have jurisdiction over federal crimes or those with an interstate component. Funding by different levels of government determines jurisdiction.

Comparisons regarding the criteria for women police recruits and men police recruits: The smaller size of a woman allows for better use of cover and concealment that goes along with their better vision in low light, better peripheral vision and better hearing. Women are able to hear a broader range of sound frequencies and tones in the human voice. Women are also better at multitasking, although it is true I find that to be funny and hard to believe considering men acquiring a larger brain. I believe that neither is better than the other, we are just different, and are able to accomplish greater tasks when working together.

Women and Minorities in Law Enforcement. (2016, Oct 08). Retrieved from https://studymoose.com/women-and-minorities-in-law-enforcement-essay 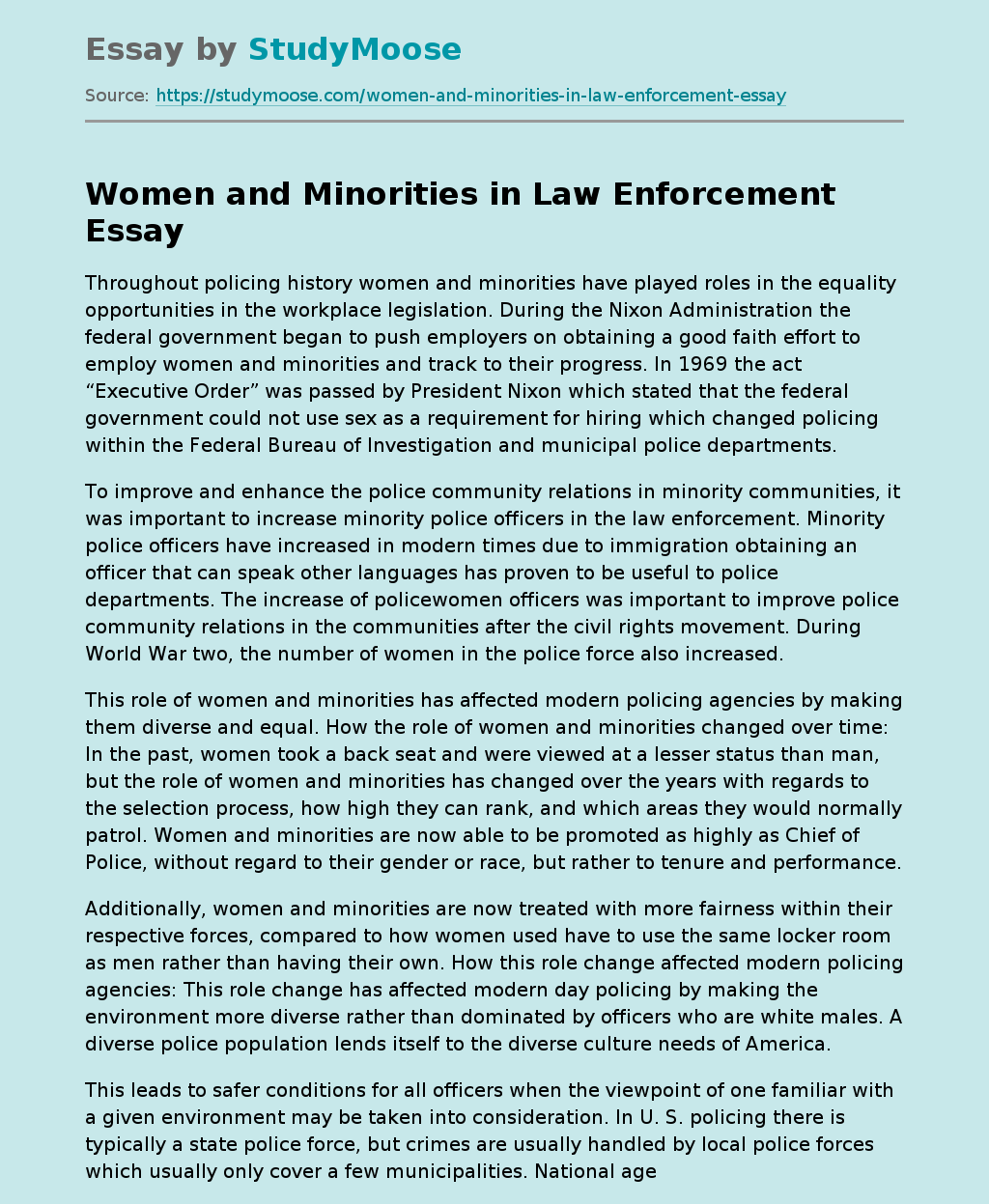