Woman in Mind by Alan Ayckbourn

How does Ayckbourn present the contrast between Susan’s fantasy family and her real family in ‘Woman in Mind’. Explore the importance of this contrast to the play’s central theme.

In ‘Woman in Mind’ Ayckbourn uses Susan’s creation of an idealistic fantasy family and more importantly the contrast of this ‘perfection’ with her reality to help portray Susan’s emotional breakdown to the audience. The role of the fantasy family in this play is to emphasise the unhappiness and emotional turmoil in Susan” real world as they generally appear at a point where Susan is in a particularly distressing situation with her real family.

Don't use plagiarized sources. Get your custom essay on
“ Woman in Mind by Alan Ayckbourn ”
Get custom paper
NEW! smart matching with writer

One of the ways in which Ayckbourn presents the contrast between the two families is with the use of the differing appearances. For example when the audience meets the fantasy family for the first time they are presented as “(tall, good – looking, athletic)”, and Lucy’s clothing is “(fresh, summery, rather timeless)”. This is a complete contrast to the way in which the real family is presented “(an unattractive picture, entirely lacking the lightness and ease of her earlier family)”.

Immediately Ayckbourn has shown the fantasy family to be more ideal and suitable for Susan which hints that Susan is not at ease in reality , even though there has not yet been much insight into the causes of Susan’s breakdown.

The setting of ‘Woman in Mind’ is also essential in the presentation of the contrasting families although it is important for the audience to remember that the play is seen from an entirely subjective viewpoint and that although two settings are implied only one is actually the reality.

Ayckbourn uses the lighting and sound effects to accenuate the contrast between the two worlds.

For example the stage direction at the beginning of the play suggests the setting to be a “(small, tidy, surburban garden)” but when members of her fantasy family appear the use of lighting “( The garden grows inperceptibly bigger and lighter)” accompanies the changes which Susan herself suggests “herb garden”, “lake” and “tennis courts”. The setting is vital as it shows the fantasy family to be more upper class and perhaps this helps Susan to feel more worthy in her life.

The use of simpler contrasts such as food and drink also helps Ayckbourn to display the contrast between the two families and he achieves this with the use of props. For example, Susan is offered champagne and gourmet meals by her fantasy family whereas, in reality she is given the less sophisticated sherry and must put up with Muriel’s dreadful “Earl grey omelette”. The actions of Susan show how much more she prefers her fantasy family, which is shown by the stage directions, for example “(leaving her sherry glass on the card table…she comes across her glass of champagne and drinks it)”.

The contrast between the two families is also presented through the use of language. An example of this is the way in which the fantasy family use nicknames for each other, for example “Big Sis”, “Susie” which helps to show the happy, friendly relationship they have. The tone of voice is completely different however in her reality situations. For example when Gerald defends Muriel in saying that Susan should be more sympathetic towards her because of her “present and past sufferings” Susan is extremely sarcastic “Sorry, sorry, sorry”.

The fantasy family is also presented as having completely different attitudes towards Susan and Ayckbourn has used this along with the other techniques to emphasise her emotional turmoil. For example her fantasy family are extremely grateful for her and appreciate her “We’re all going to have to take extra special care of you” “We’re just all so proud of you”.

The contrast between the two families is important in showing the insecurities Susan has in her life and her fantasy family is a representation of her dreams which for Susan become confused with reality. One of the main reasons for Susan’s emotional breakdown is her feeling of not being loved which is mainly a result of her distant unloving relationship with Gerald. Gerald and Susan have conflicting opinions even about small unimportant things for example, they have different opinions over the bush in their garden. Gerald calls it a “dead bush” whereas Susan claims : “It’s not dead I planted it yesterday”.

Gerald is also very unsympathetic towards Susan’s turmoil, for example when Susan says she is not very happy, Gerald’s unhelpful viewpoint is “well who is? These days. Very few”. Gerald seems too interested in the book he is writing which is an important factor in Susan’s breakdown. The lack of a physical side in their relationship leads Susan into the arms of her imaginary lover Andy, whilst in reality she has burnt Gerald’s history of the parish “All sixty pages blazing away”. More importantly Gerald seems very unaware of the change in his relationship with Susan. For example when Susan tells Gerald she does not love him anymore, Gerald’s response is “I’m not aware my feelings towards you have altered that much” which gives a clear insight into the lack of closeness in their relationship to the audience.

Susan’s emotional breakdown is also caused by her relationship with Rick which Ayckbourn presents as one without the usual mother-son communication. Although Susan seems to be quite light-hearted and sarcastic over the fact that their son does not talk to them “All of us miming to each other over the table” she is however, very aware and upset at the lack of closeness between them. For example, when Gerald explains to her that Rick wants all of his furniture to be sold Susan replies “We’ll have nothing left of him at all”. This display of sudden distress to the audience emphasises strongly the emotional stress Susan is experiencing.

A different side to Susan is seen when Rick tells her of his marriage to Tess and explains that he does not want the family to meet her, and Susan believes it is because of Gerald “Why? Because of your father?”. This shows the distance in her relationship with Rick and Susan becomes distraught when she discovers that Rick has always considered her to be an unfit mother “I don’t want to hurt you anymore, Mum, but God help any daughter who had you as a mother”. This is a complete contrast in Susan’s fantasy life however, because she does infact have a very close relationship with her fantasy daughter Lucy. An example of the difference between her two children is that whereas Rick was very reluctant to tell Susan about his marriage, Lucy is very eager “…there’s something I desperately want to tell you”.

Ayckbourn has also used the role of an interfering sister-in-law to enhance the worthlessness Susan is feeling. Muriel constantly insists on providing meals and drinks and criticises Susan always where Gerald can hear. An example of this is when Muriel puts Earl Grey tea in an omelette and says to Susan “I do wish you’d label things, Susan. It’s a very inconvenient kitchen to work in , it really is…”.

All of these aspects in Susan’s reality lead her to having low self-esteem and the questioning of her role. An example of this is when Susan claims that the thrill of being a housewife has gone “I used to be a wife. I used to be a mother. And I loved it…The thrill has gone” which is a complete contrast to her fantasy world which shows that she clearly wants to be able to employ staff “(Muriel…dressed in very formal maid’s black bombazine)” .

The fantasy family are summoned to help her cope and their words are Susan’s real thoughts which become forced into reality and help Susan to say what she is really feeling. For example, when Bill comes outside to persuade Susan to eat lunch with them Tony and Lucy tell him to “drop dead”, these are Susan’s thoughts articulated by the characters and lead Susan herself to say the same “Oh, Bill, do drop dead”. Susan does have , at that stage still have some control over her life as she is able to banish her fantasy family whenever she wants.

The complete contrast in families is extremely important in showing Susan’s emotional breakdown because the fantasy family has been perfected down to every last detail in Susan’s mind and shows the ideal life Susan would love to lead. However because of the idealism the fantasy family provides Susan becomes less and less able to control her own creation.

This is shown in act two where her fantasy life and reality become mixed and she has entered a world of madness created by herself “(What we see are images remembered by her from films she has seen, books she has read, TV she has watched)”. By this stage in her breakdown Gerald seems to know the fantasy family and talks to them in the light-hearted language that they used with Susan earlier “Tony, you old rascal…”. Whereas it was only in reality that Susan felt ignored which forced her into an imaginary world where she was loved and treasured, now it seems that neither of her families are taking notice of her: “LOOK AT ME AT ONCE, DO YOU HEAR? ALL OF YOU!!!”. This is the final point in Susan’s breakdown.

Woman in Mind by Alan Ayckbourn. (2017, Sep 20). Retrieved from https://studymoose.com/woman-in-mind-by-alan-ayckbourn-essay 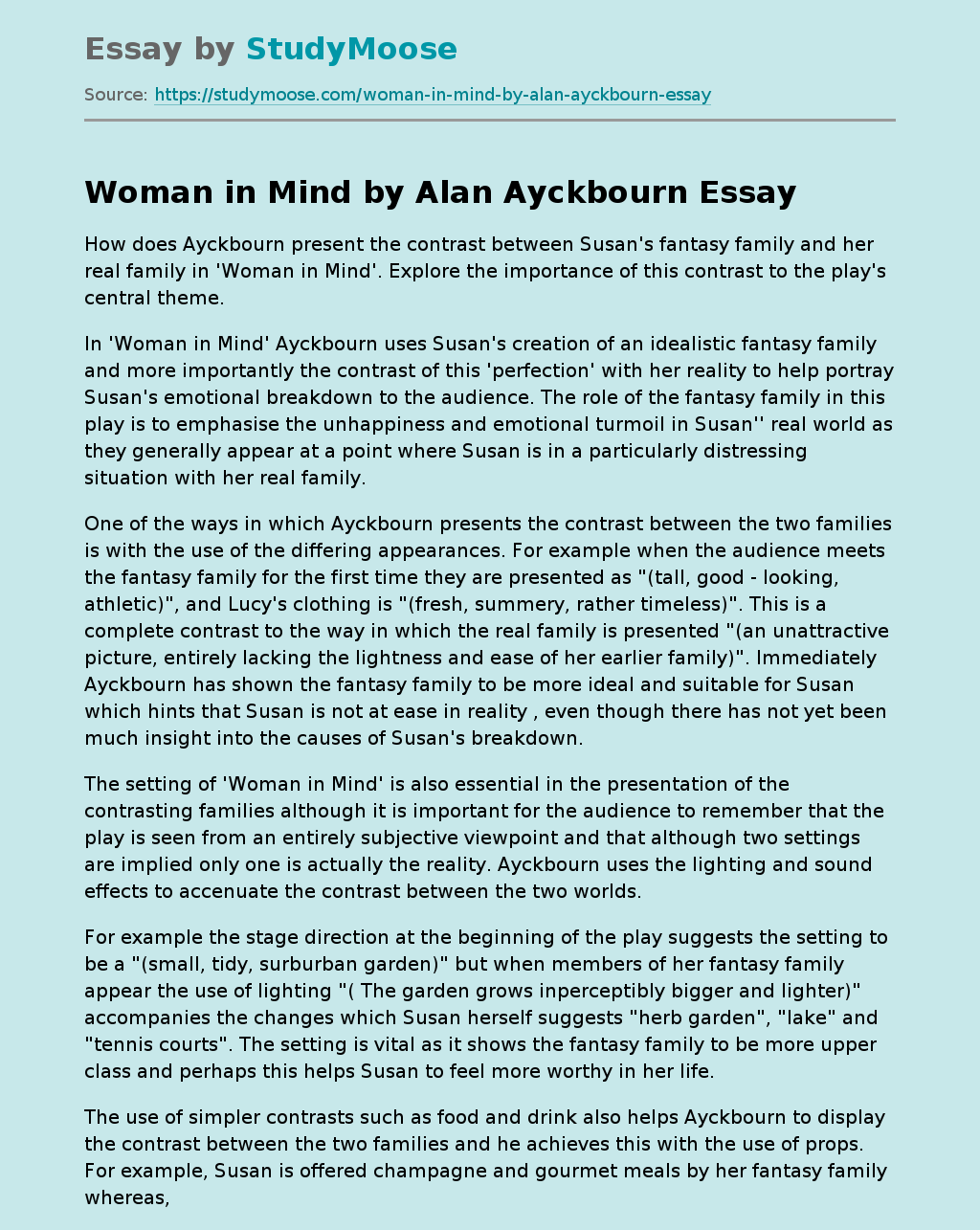