Explain how built-in (or automatic) stabilizers work. What are the differences between proportional, progressive, and regressive tax systems as they relate to an economy’s built-in stability? Answer In a phrase, “net tax revenues vary directly with GDP. ” When GDP is rising, so are tax collections, both income taxes and sales taxes. At the same time, government payouts—transfer payments such as unemployment compensation and welfare—are decreasing. Since net taxes are taxes less transfer payments, net taxes definitely rise with GDP, which dampens the rise in GDP.

Don't use plagiarized sources.
Get Your Custom Essay on Wk 6 homework solutions Just from $13,9/Page

On the other hand, when GDP drops in a recession, tax collections slow down or actually diminish while transfer payments rise quickly. Thus, net taxes decrease along with GDP, which softens the decline in GDP. A progressive tax system would have the most stabilizing effect of the three tax systems and the regressive tax would have the least built-in stability. A progressive tax increases at an increasing rate as incomes rise, thus having more of a dampening effect on rising incomes and expenditures than would either a proportional or a regressive tax.

The latter rate would rise more slowly than the rate of increase in GDP with the least effect of the three types. Conversely, in an economic slowdown, a progressive tax falls faster because not only does it decline with income, it becomes proportionately less as incomes fall. This acts as a cushion on declining incomes—the tax bite is less, which leaves more of the lower income for spending. The reverse would be true of a regressive tax that falls, but more slowly than the progressive tax, as incomes decline. Question 4

Briefly state and evaluate the problem of time lags in enacting and applying fiscal policy. How might “politics” complicate fiscal policy? How might expectations of a near-term policy reversal weaken fiscal policy based on changes in tax rates? What is the crowding-out effect, and why might it be relevant to fiscal policy? Answer Question 1It takes time to ascertain the direction in which the economy is moving (recognition lag), to get a fiscal policy enacted into law (administrative lag), and for the policy to have its full effect on the economy (operational lag).

Meanwhile, other factors may change, rendering inappropriate a particular fiscal policy. Nevertheless, discretionary fiscal policy is a valuable tool in preventing severe recession or severe demand-pull inflation. A political business cycle is the concept that politicians are more interested in reelection than in stabilizing the economy. Before the election, they enact tax cuts and spending increases to please voters even though this may fuel inflation. After the election, they apply the brakes to restrain inflation; the economy will slow and unemployment will rise.

In this view the political process creates economic instability. A decrease in tax rates might be enacted to stimulate consumer spending. If households receive the tax cut but expect it to be reversed in the near future, they may hesitate to increase their spending. Believing that tax rates will rise again (and possibly concerned that they will rise to rates higher than before the tax cut), households may instead save their additional after-tax income in anticipation of needing to pay taxes in the future.

The crowding-out effect is the reduction in investment spending caused by the increase in interest rates arising from an increase in government spending, financed by borrowing. The increase in G was designed to increase AD, but the resulting increase in interest rates may decrease I. Thus the impact of the expansionary fiscal policy may be reduced. Question 7 Why did the budget surpluses in 2000 and 2001 give way to a series of budget deficits beginning in 2002? Why did those deficits increase substantially beginning in 2008? Answer The economy was sluggish through 2002, lowering revenues, and in June 2003 Congress again cut taxes.

In addition there was the September 11, 2001, terrorist attacks, the subsequent “war on terror” at home and abroad, the economic downturn of 2001, and the fiscal policy response of extended unemployment benefits and significant reductions in tax rates. In 2008 Congress acted rapidly to pass an economic stimulus package to address the recession. This law provided a total of $152 billion in stimulus, with some of it coming as tax breaks for businesses, but most of it delivered as checks of up to $600 each to taxpayers, veterans, and Social Security recipients. Question 8 Distinguish between the total U. S. 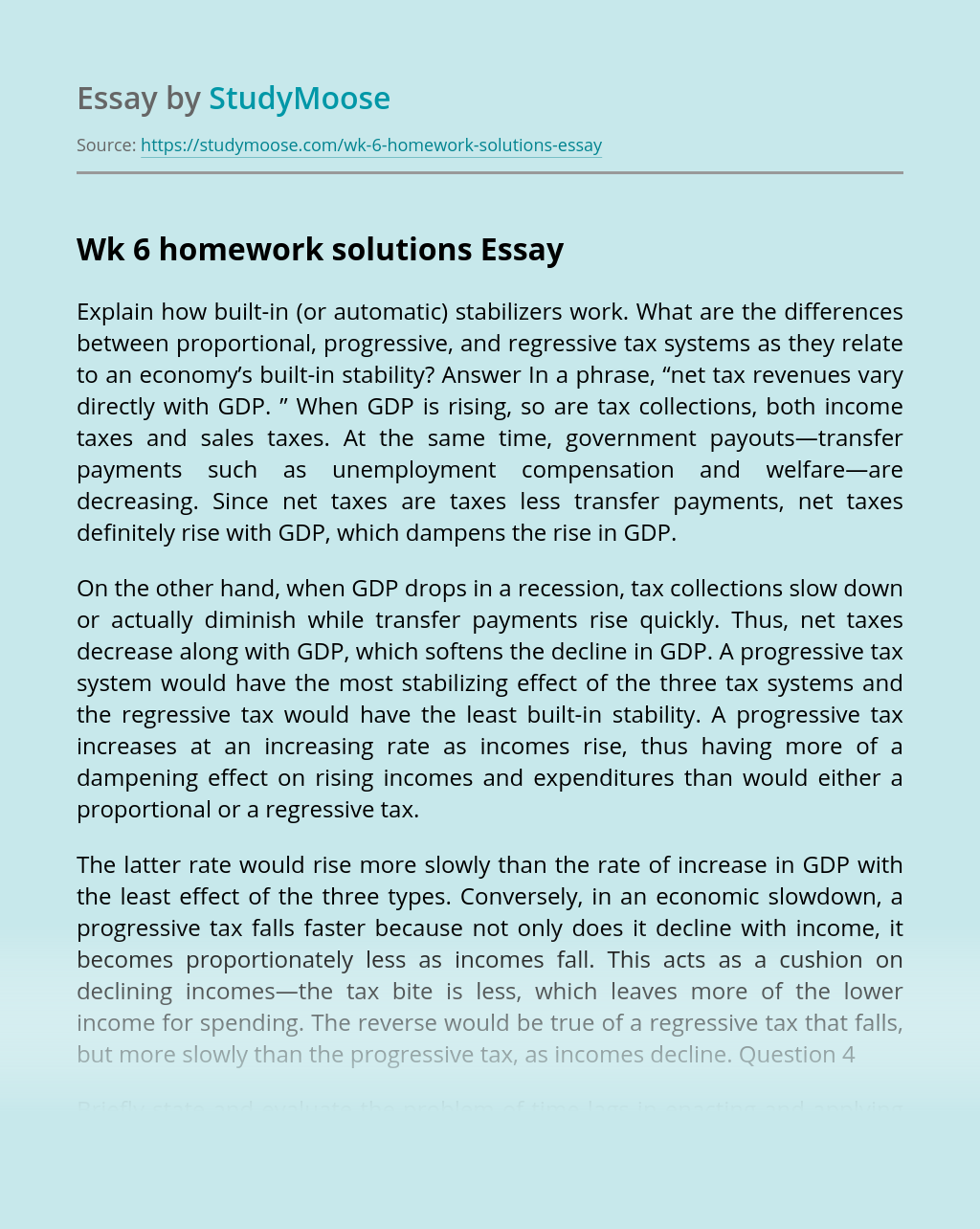 The price elasticity of demand coefficient measures: buyer responsiveness to price changes. The basic formula for the price elasticity of demand coefficient is: percentage change in quantity demanded/percentage change in price. The demand for a product is inelastic with repsect to price if: consumers are largely unresponsive to a per unit price change. Which of...

The Turkish government is made up of democratically elected representatives of the people divided into several ruling bodies. In September 2010, a referendum on constitutional reform backed amendments to increase the control of parliament over the army and the judiciary. Turkey is a strong proponent of liberal trade and investment policies. The European Union (EU)...