Without Conscience: the World of Psychopaths

Without Conscience Book Report Without Conscience: The Disturbing World Of The Psychopaths Among Us It all started with unusual brain wave patterns on an electroencephalogram (EEG). It was several years ago when Robert Hare and two graduate students discovered these unusual brain wave patterns, so unusual that they couldn’t have come from real people, as described by the editor of a scientific journal. However, those EEGs did come from real people, a different kind of people, people from all paths of life-different background, cultures, and race, people that we have all come across in our daily lives.

Don't use plagiarized sources. Get your custom essay on
“ Without Conscience: the World of Psychopaths ”
Get custom paper
NEW! smart matching with writer

The most intriguing characteristic, however, is the lack of conscience within a psychopath.

We can all agree, it seems as if psychopaths feel no remorse or guilt after exhibiting their criminal behavior. Psychopaths take what they want , do as they please, and do not feel bad after inflicting pain unto others for the only thing matters is their self-gratification. As Robert Hare puts it, “psychopaths are social predators who charm, manipulate, and ruthlessly plow their way through life, leaving a broad trial of broken hearts, shattered expectations, and empty wallets (Hare, p.

xi). ” One may wonder how it is that these psychopaths can get away with such acts.

How is that we can describe a psychopath but not always identify them? The truth of the matter is that psychopaths live among us, and not only are they masters of manipulation, which would make it hard for people to identify them in the first place, but they do not all engage in violent acts. Most people think of the high-profile cases such as John Gacy, deemed “man of the year,” who murdered thirty-two young men in the 1970s. Or maybe you think of Diane Downs, a woman who shot her children in efforts to attract a man who didn’t want kids.

We can think of many cases similar to this that grabs our attention and makes it easy to identify the disregard for morality in the psychopaths that commit these acts. However, as Robert Hare describes it, we may run the risk of not seeing the “bigger picture” if we only associate violent behavior with psychopaths. The reality dictates that there are psychopaths who don’t kill but still have an impact on our regular day to day lives. Moving beyond the vital issue of the identification of psychopaths, it is even more complex of an issue to try to understand the reasons behind the actions of said psychopaths.

Do psychopaths scheme and plan out every move, or do they just follow their instincts and act out without much thought or concern. It doesn’t just end there. Robert Hare addresses the concept of lack of conscience on various occasions throughout the book. As we know, psychopaths rarely, if ever, feel remorse, guilt, or sympathy for their victims. The question is, does this occur because they have a personality or cognitive deficit, or are they just morally bad? While many individuals may pair the word psychopaths with the word crazy, Robert Hare disagrees.

Robert Hare attempts to make a distinction between psychopathology and antisocial personality disorders, as he claims they are not the same thing. It is alarming to consider the fact that psychopaths do not necessarily have a brain or cognitive deficit, and actually gain satisfaction from inflicting harm unto others for personal gain. According to Hare and accepted legal and psychiatric standards,, psychopathic killers are not mad or insane. They just simply have a disregard for morality and an inability to relate to human beings. He clarifies that not all serial killers are psychopaths, some are merely insane.

Hare also points out that not all psychopaths are criminals, and not all criminals are psychopaths. Hare makes valid points and clarifications of the mystery world of psychopaths. While the mystery still remain unsolved, every research experiment and every case analysis brings us closer to having answers to all the unanswered questions that face us in trying to understand the unknown. The more we learn, the more we can anticipate the danger before it happens to us. The more cases become known to public, the better able we will be to identify these masters of manipulation and keep ourselves from being victims to these psychopaths.

Without Conscience: the World of Psychopaths. (2020, Jun 02). Retrieved from https://studymoose.com/without-conscience-the-world-of-psychopaths-new-essay 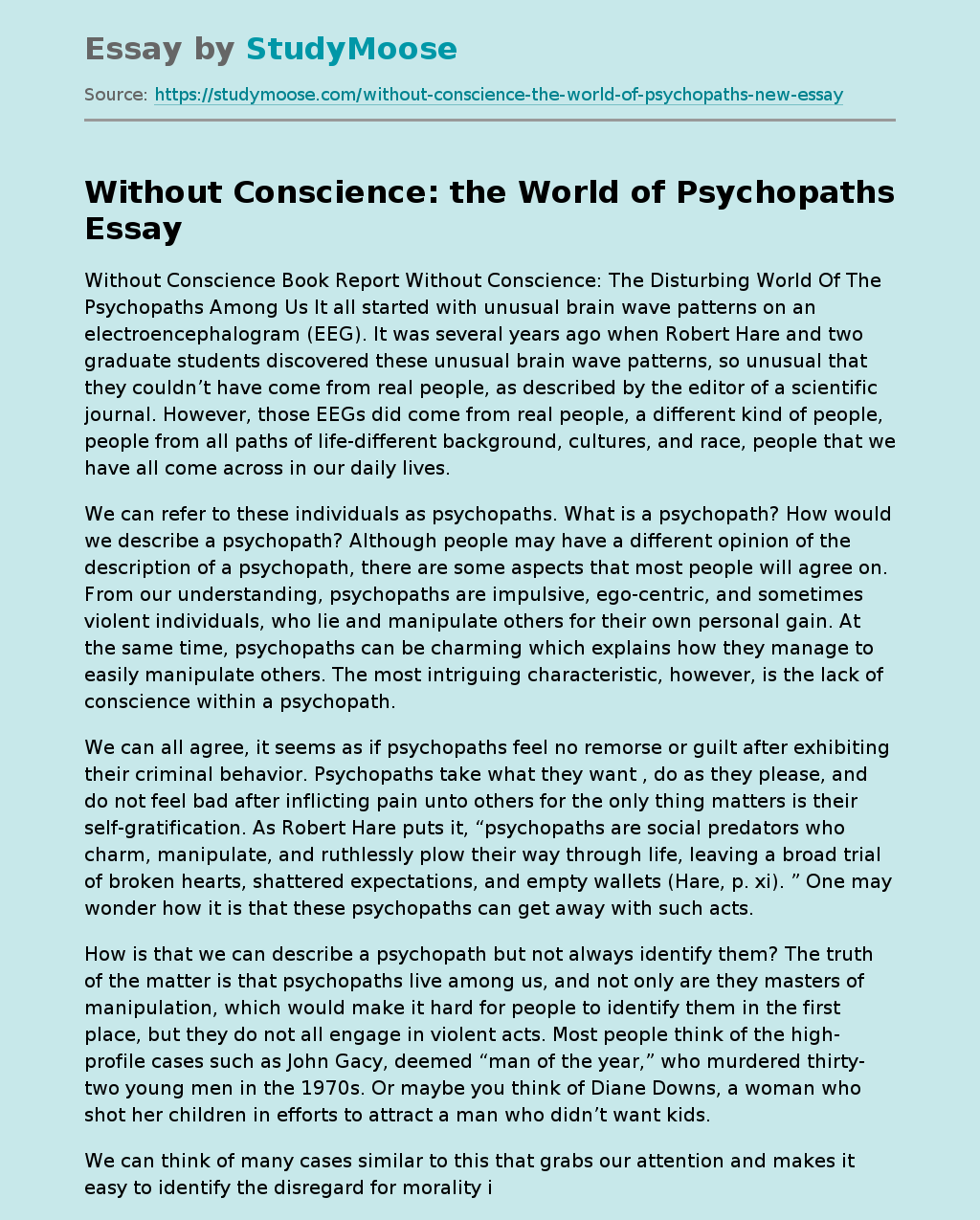