Sir Winston Leonard Spencer-Churchill, shortly known as Winston Churchill was born on the 30th of November 1874 to parents Lord and Lady Randolph Churchill. He was born into the aristocratic family of the Duke of Marlborough in a bedroom in Blenheim Palace, Oxfordshire, two months prematurely.

Winston is best known for his leadership during World War 2. He is regarded as one of the best war time leaders in the 20th century and served as Prime Minister to the United Kingdom twice, between 1940-45 and 1951-55.

Don't use plagiarized sources. Get your custom essay on
“ Winston Churchill’s Role in World War 2 ”
Get custom paper
NEW! smart matching with writer

Winston Churchill was well known for being a statesman and orator but was also an officer in the British Army, a historian, a writer and an artist. He is the only British Prime Minister to receive the Nobel Prize in Literature and was the first person to be made an Honorary Citizen of the United States. Churchill gained fame as a war correspondent and wrote books about his campaigns.

Churchill was important to Britain in World War 2 for many different reasons, mainly because he was just such a good leader and because of the choices he made whilst in power.

One of the main reasons was that he gave the British public belief, belief that they would win the war and by making optimistic speeches he inspired them and told them what they needed to hear. But as well as being this inspirational figure he was also quite harsh. He basically harassed the military commanders in the Middle East and North Africa for action and he gave them hell when they did not achieve the results he wanted.

Field Marshall Alan Brooke spent most of the war fighting Churchill, although they actually got on really well! It was his job to ensure that none of Churchill’s ideas ‘saw the light of day’ and he tried to shield the military from him.

One of the major things that Churchill did, between 1940-41 was gain the support of the United States. This was vital as Britain were essentially alone at resisting the Germans. It wasn’t until then that he actually formed a war strategy. Churchill adopted two goals: to defeat the Germans, and avoid unnecessary carnage. His grand strategy was to weaken Germany by attacking its more vulnerable borders, opening up new fronts in distant sites. He wanted to make new allies like France and Russia to make the Triple Entente while forcing Germany and other central powers to rearrange their military and economic resources to their western defenses. He thought that an action that brought a new ally to the cause could be as important as an action that won a battle. Churchill believed this would allow a coordinated offensive that would overwhelm German defenses and break the stalemate of trench warfare and ultimately, end the war. Attacking the Germans on multiple fronts would weaken their most decisive one.

On 15th of January 1965, Churchill suffered a severe stroke that left him gravely ill. He died at his London home nine days later, at the age of 90 on the morning of Sunday 24th of January exactly 70 years after his father’s death. His funeral was the largest state funeral in world history up to that point in time, with representatives from 112 nations. Only Ireland did not broadcast the service live on television in Europe, where 350 million people watching including 25 million in Britain. By the command of Queen Elizabeth II, his body lay in state for three days and a state funeral service was held at St Paul’s Cathedral on the 30th of January, 1965. 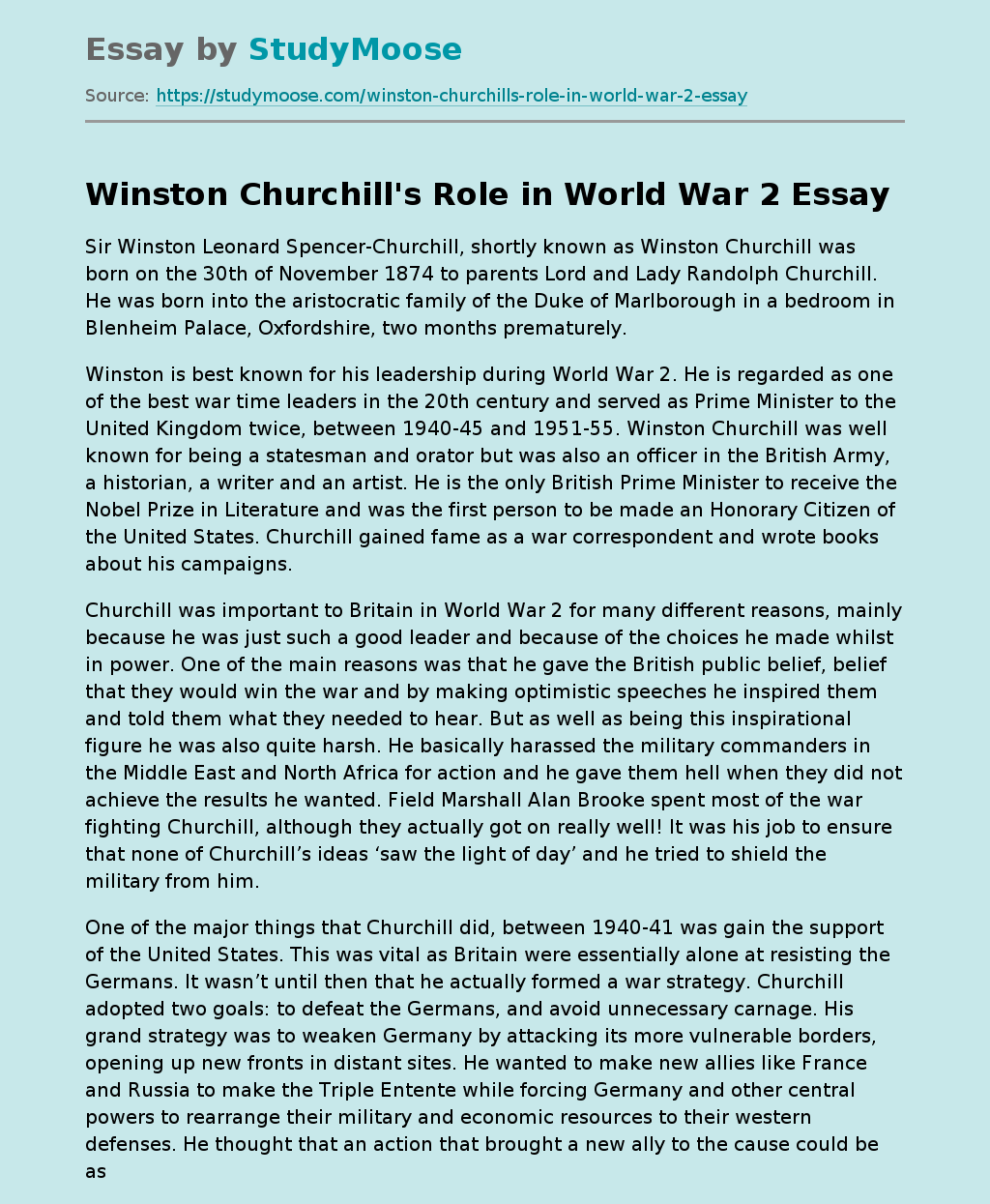