Winning and Friendship in Remember the Titans Movie

To create such a remarkable film is exhausting. Remember the Titans the film that I have created is inspiring, exciting and watching it is an experience you won’t forget. Created and produced in 2000 Remember the Titans has had much work, devotion and persistence put into it. The film distributes many reasons of why it should be in the 2014 Human rights Literature and Film festival. Remember the Titans has become such a marvellous piece of display, showing how black and white unite for the better.

Don't use plagiarized sources. Get your custom essay on
“ Winning and Friendship in Remember the Titans Movie ”
Get custom paper
NEW! smart matching with writer

The reason why Remember the Titans is such a valuable film is because it shows that two races can come together for the better to prosper and strive. This unique film shows that racial discrimination can be overcome.

Remember the Titans shows prejudice, but then again don’t we all have a preconceived opinion of others? I believe we do. A key scene where prejudice is shown is when the players are about to go to camp at Gettysburg.

Coach Boone has just arrived, he walks over to the coaches and gives them his play book. He is then approached and confronted by his Team Captain Gerry Bertier and team member Ray Budds. Gerry says to Coach Boone “I’m the only all American you got”. He tells Coach Boone that he must reserve half of the team for the white players.

The Dialogue also says “we don’t need none of your people in the defence line” Gerry referring to “your people” is categorising the team players as black and labels them as the “other”.

While Bertier is in a confrontation with Coach Boone an over the shoulder close up shot is used. This shot establishes tension by the sober facial expressions and later a long shot shows hostile stance and posture. This scene shows how harsh and blunt prejudice is in Remember the Titans.

Remember the Titans is more than a film about winning, it involves uniting the two black and white races so they come together and form a friendship, a bond like no other this is why for camp the players were taken to the battle of Gettysburg. During the camp coach Boone made the players take a 100 mile run to the burial grounds of the fallen soldiers. Boone says “I don’t care if you like each other right now, but you will respect each other. And maybe – I don’t know, maybe we’ll learn to play this game like men…” The technique is the use of the dialogue and the interpretation of this quote means that no matter how much racial hate the players have for each other they must learn to respect each other and if they do they can win.

Taking the players on Camp would have been the most important action for Coach Boone, because if they sleep, live, train and practice together like those soldiers they have to come together as one, respect each other and work as a team. This scene shows that Remember the Titans is more than just about winning and how friendship and trust must be formed for them to succeed.

Remember the Titans is one of a kind, and one of a kinds are unique its uniqueness can be seen in the way it teaches us to overcome racism. In the beginning of the film, the white and black members of the team hate each other. The white players of the team don’t “want to play with those black animals”. The black players don’t want to integrate either necessarily because they don’t “trust your people to be honest”. A scene where this is seen clearly is when Ray and Petey are forced to learn about each other in camp. The two players are sitting on opposite sides facing each other like adversaries. The camera angle technique is a mid-shot. Dividing them is a path running between them up towards a big traditional door of Gettysburg College.

This path represents the tradition of racism in America between blacks and whites all the way back to slave-ownership times that divides Alan and Petey in the present day. This camera shot is combined with a dialogue that is suspicious, personal and hurtful. The film remember the titans sends a message that a racism war has been fought for so many years and is still going, but these boys overcame racism and became one. Remember the Titans shows us how racial discrimination was overcame. It shows that it is possible for any age or race to be united and that together you can overcome racial discrimination and be stronger, this is why this film is so important and it would be a great film to be shown at the 2014 human rights literature and film festival. To not show it in the festival would be an abomination. Remember the Titans presents a memorable message that can help us overcome racial discrimination and work towards creating a fair and equal society.

Winning and Friendship in Remember the Titans Movie. (2016, Apr 23). Retrieved from https://studymoose.com/winning-and-friendship-in-remember-the-titans-movie-essay 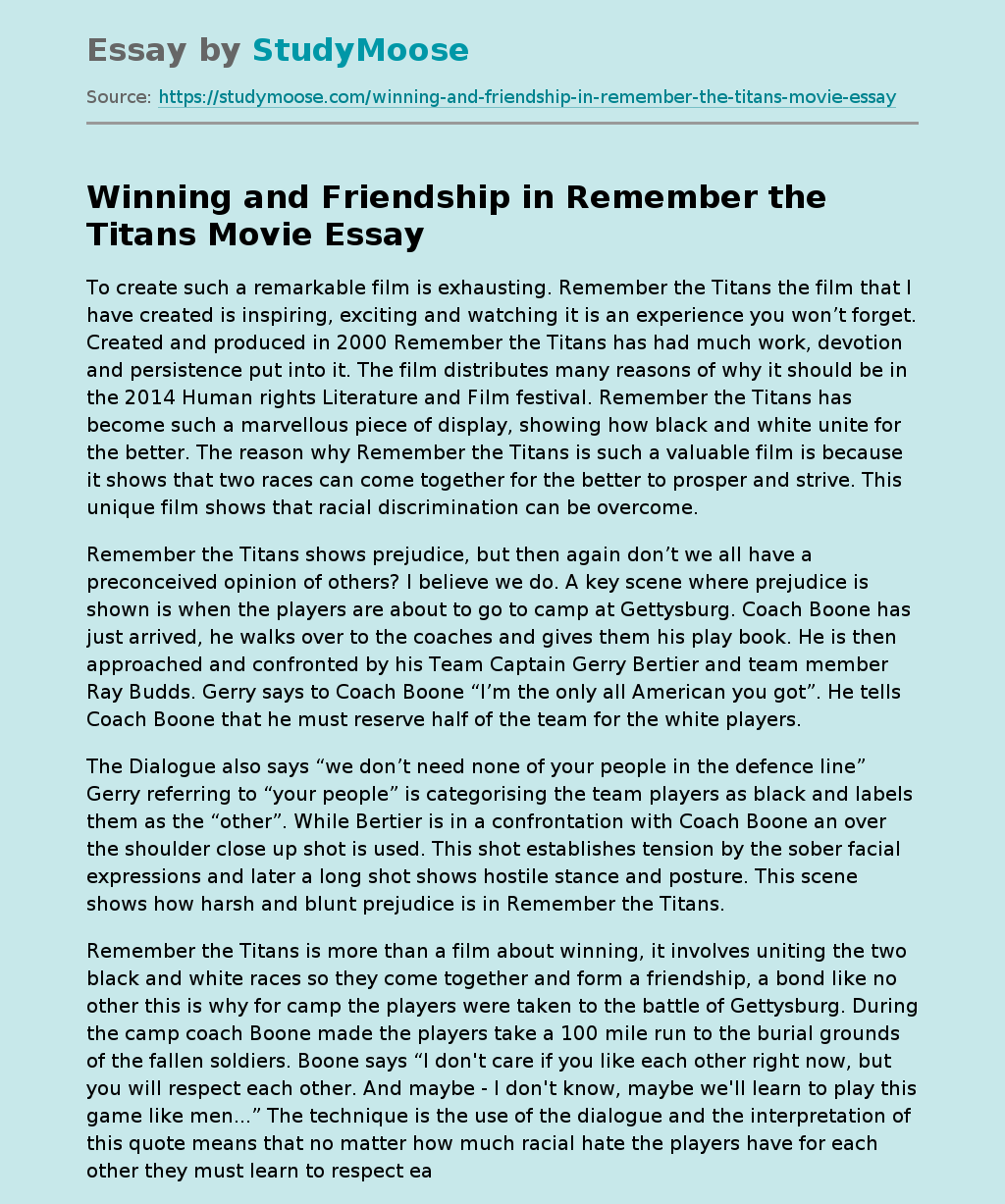