In Willy Russell’s Educating Rita, the issues of class inequalities and the choices of education are the key themes of the play. These ideas are convey through not only by the character of Frank and Rita and their uses of language but also the dramatic technique employed.

Class differences are clearly illustrated at the beginning of the play, in the relationship between Frank and Rita. Class differences are especially evident when Rita assumes that an academic like Frank will enjoy fictions such as “Rubyfruit Jungle” just as much as she did.

For example, in Act I scene I, Rita mentions a poem she has read about fighting death and Frank jumps to the conclusion that she means Dylan Thomas. However it is a poem by the Liverpool author Roger McGough that Rita has in mind. There is also one boundary that she refuses to cross which involves meeting Frank on a social level. He invites her to dinner and although Rita eventually finds his house, she knows that the wine she has brought is inappropriate and that she would have been unable to talk confidently to the dinner party guests.

She is disturbed by her relatives singing songs at their local pub, especially when her mother says “we could sing a better songs that those” (I,vii).

Frank and Rita’s language have difficult communication and they also have different language. Rita’s uses of language show that she is from a contrast culture to Frank as her language employs as a lot of slangs and expletives. On the other hand, Frank who comes from an educated class, his language is more sophisticated and uses formal level of English and literary devices to indicate his social status. An example of this to illustrate the differences of their language is when Rita asks “What does assonance mean?” and Frank gives a short laugh then reply “What?”. However, despite their great contrast, the two classes can learn from each other. Rita is a ‘breath of fresh air’ (I, i) in Frank’s life, teaching him to view things from a completely different perspective unlike the conventional point of view he had adopt when teaching literature for the past years. Yet, Frank can offer Rita an education and therefore choice.

Nevertheless, Rita’s background does not stop her determination to be educated. Rita sees education as a ticket to opportunities of a life time and a form of liberation, an ability to control her destiny which she never had before as an uneducated worker. She remarks about the way she came to reject the values of her friend and families and looked for something more meaningful in life other than clothes and men. The quotation of “I wanna discover meself first. Do you understand that?” is highly effective because it shows that Rita knows that she is uneducated and expresses a passionate hunger to know everything. It also reveals that she are desire to change into a new person and she is full of hope at the change to improve.

Although Frank begins on higher on the intellectual ladder, he has a more difficult ascent. His brooding sense of failure as a write, teacher, lover and human being have crippled him and made it difficult for him to reach his full potential. Education will not be his escape, instead it is the influence of Rita, whose interest him and whose shining example of determination and energy are what motivate and inspire him to get going again.

Overall, Educating Rita has presented the main issues of class inequality and education effectively through the characters, language and the dramatic techniques. 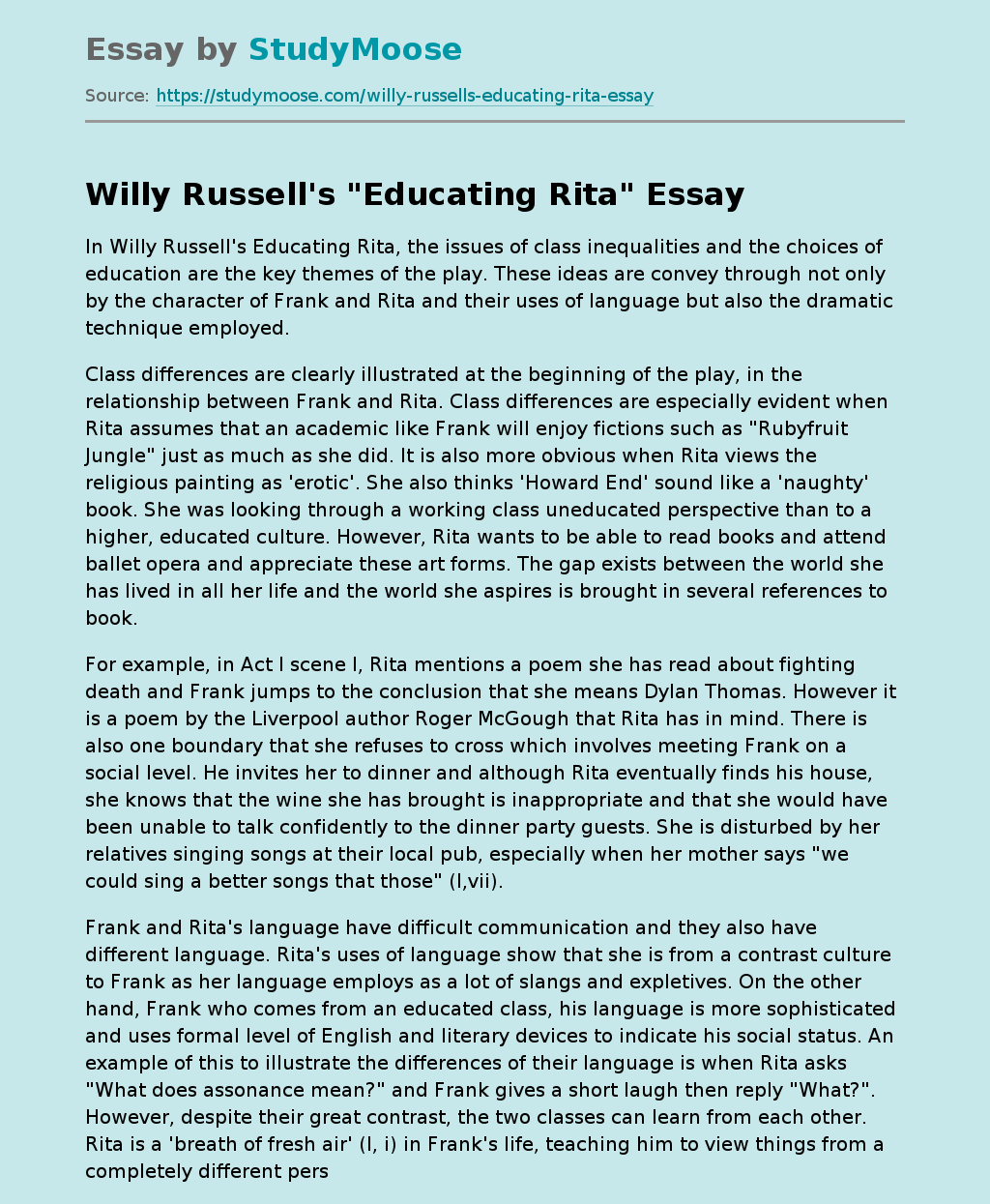