Willy Loman’s constant daydreaming in Arthur Miller’s play “Death of a Salesman”, leads to very severe consequences. Willy never really does anything to help the situation; he just escapes into the past, whether intentionally or not, to happier times where problems were scarce. He uses this escape as if it were a narcotic, and as the play progresses, the reader learns that it can be a fatal, because of its addictiveness and it’s deadliness, however some people argue that his downfall was associated with the social issues which enclosed him.

Don't use plagiarized sources. Get your custom essay on
“ Willy Loman’s ”
Get custom paper
NEW! smart matching with writer

Social values can be described are the norms that all people follow, which varies from culture to culture, that is to say that they are the ideas generally accepted by everyone. Many contributing factors define the social values in which Willy Loman lived; a major factor was the “American Dream”. Willy Loman was a believer in the American Dream, this dream caused him to think that he could do well in life and “become a success”.

Willy wants his life to be a success but he feels he is a failure and he has to lie to impress his family, “I never have to wait in line to see a buyer. ‘Willy Loman is here!’ That’s all they have to know, and I go right through”. However, there is a flaw to this dream though, it is always moving on. By the time that one aim has been achieved, a new dream has developed. As Willy says, “there is always something nice up ahead” but the problem is, tomorrow is always tomorrow and never today.

The American Dream is measured in terms of are you are up-to-date with gadgets and possessions. This “dream” leads the Lomans’ and some other Americans to be very materialistic. Willy always wants what is current and new but he never has it because by the time he has managed to achieve it, a new fad has come along. To the Lomans’, a fridge is a symbol of achievement and status, not everybody could afford a fridge.

On page 10, Willy says, “Work a lifetime to pay off a house. You finally own it, and there’s nobody to live in it.” This quote is very true for many things in Willy’s life such as his house, car and fridge. Also on page 51 Willy tells Linda that she wont have her mending stockings in the house, this is probably because Willy feels that mending old clothes isn’t good enough and that his family should be able to purchase new clothes whenever they need to, and also because of the immense guilt he feels about his affair with The Woman, because she was entertaining him for the want of a better term, for stockings.

Willy’s pride in his sons defiantly contributes to his fate; the pressure Willy puts on himself to make sure his sons are a success is one of his downfalls. The idea of generational progression is definitely very important to Willy, if Biff and Happy become successes then they will represent the Lomans well, make good lives for themselves and also through having successful sons Willy may feel his is a success himself. Happy says (talking about Willy) “He just wants you to make good, that’s all.” And later on Biff says “this Saturday – just for you, I’m going to break through”. Willy’s sons do love him but in some ways they just humour him to keep him happy.

Another value that seems to be rife in Willy’s life is ageism. Willy is regarded, by some people, as useless. When Willy asks if he could not travel anymore for his occupation his boss is stunned and says “Not travel! Well, what’ll you do?” Willy is patronised by his boss, who is young enough to be Willy’s son but refers to Willy as “kid”, and he tells Willy “I think you need a good long rest.” One of the values that this shows is that the Lomans are living in a “throw away” society. This is what is happening to Willy. When Howard finds a new gadget he says “I tell you, Willy, I’m gonna take my camera, and my bandsaw, and all my hobbies, and out they go”. Howard seems to apply this to Willy too, “I think you need a good long rest.” “Look, kid, I’m busy this morning”

As well as wanting to be successful, Willy wants to be more successful than the people surrounding him, but not his family. He wants to prove to everyone that he is good enough; he knows that they laugh at him and he wants to prove them wrong. Willy tells Howard he is “defiantly going to get one” in relation to a gadget that there is no way Willy could afford but he feels like he has to keep up to date, and keep up with Howard.

Willy thinks he can achieve this goal with a smile and handshake. He places image before the things that really matter. “Be liked and you will never want” this idea coupled with a belief that the most common man/woman, no matter what their background can rise to the greatest heights form the core of Willy’s motivation. It is also the source of his greatest struggle. Willy becomes Miller’s representative of the common man.

Willy has been selling unsuccessfully for a long time now, for so long, that he began to sell himself rather than the product. I think the fact that the product remains unknown conveys its’ irrelevance to the play as a whole, it doesn’t matter what Willy is selling because, he is just one of many sellers and it is not important, and that Willy is more focused on selling himself than the product. This desperate hunger for popularity on Willy’s part acts as a catalyst which speeds up the process of Willy slowly coming to the end of his tether.

This popularity, removes Willy from society and even from his own family, for example in the restaurant when he asks Biff to come up with some good news to tell Linda, here is an example of Willy trying to sell himself even to his own family. Miller has done this to convey more about the American dream, and to show how one can become consumed in the whole glorification process and forget about the true things that matter in life such as his family. Many critics have shrugged off the notion that Miller was criticising society, however I think that one would be misjudging the play and Miller to overlook the scene to which Miller has set for the Lomans’.

Willy excuse for committing suicide was that so his sons can have a better life, they could make a better life for themselves with the money that Willy’s death will bring. I also think this is a farce because since Willy committed suicide the insurance money will not be paid to the Loman’s, therefore Willy did not commit suicide to save his family, he committed suicide to escape his own guilt, the same guilt that drove him to the insanity in the first place.

Along with the guilt it is the mythical American Dream that was the fatal factor for Willy, he did work so hard to try and garner himself some status, but for every day he worked, another person laughed, which I think says a lot about American society. So, yes I do think the social issues were an important part of Willy’s demise. Many things caused this fate, and in my opinion it is ironic that the American Dream Willy worked so hard towards was a major cause of his unhappiness and suicide. 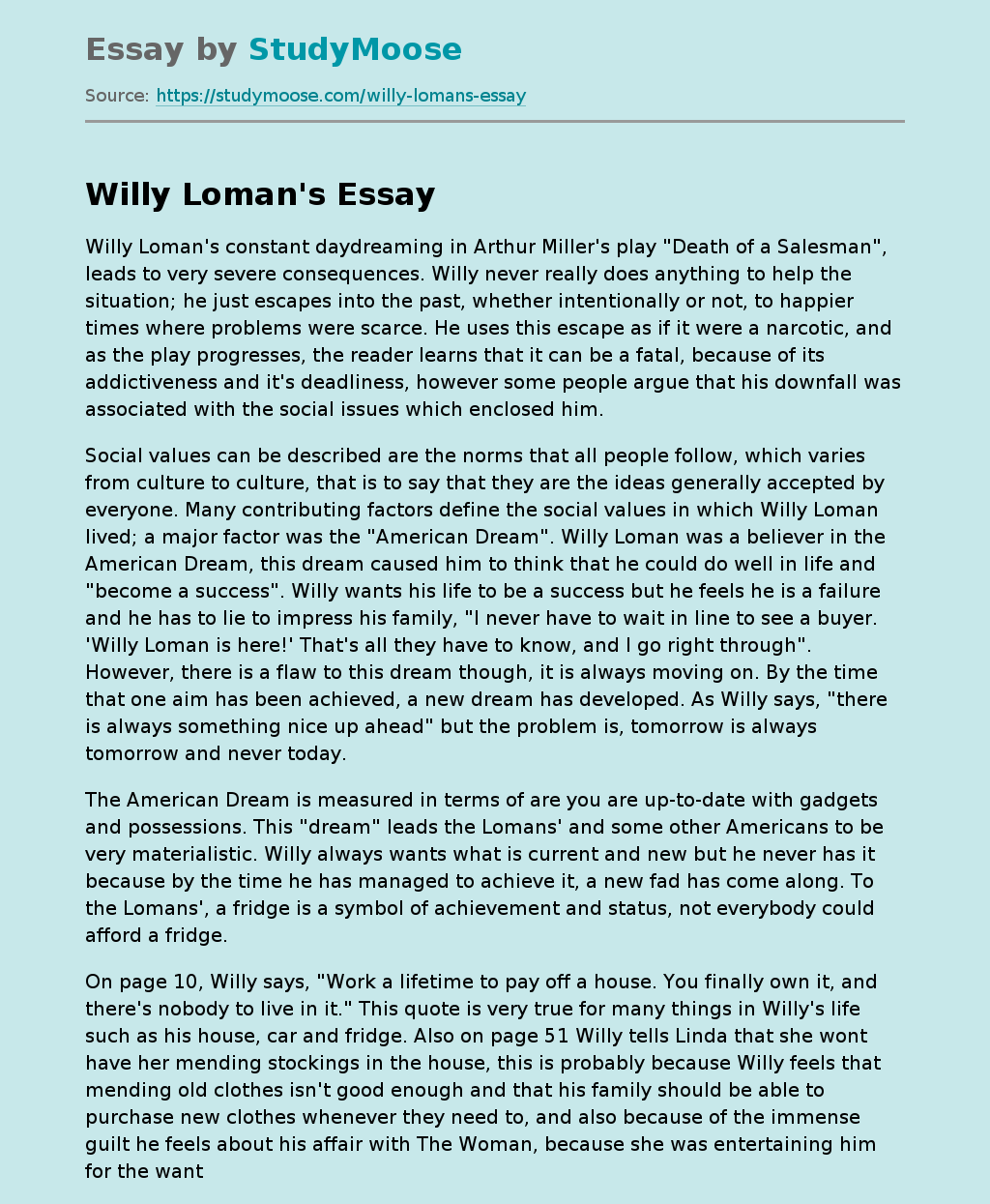