William Shakespeare was an English playwright and poet and widely recognized as the greatest dramatist to ever live. His plays show a great knowledge of human behavior, shown through portrayals of a wide range of characters. He had a large vocabulary, using almost 30,000 different words in his plays. His use of poetry and drama to create a unified effect is recognized as a singular achievement, and his use of poetry in his plays to show human emotion is considered one of the greatest accomplishments in literary history.

Don't use plagiarized sources.
Get Your Custom Essay on William Shakespeare’s life and works Just from $13,9/Page

Shakespeare was born in 1564 in Stratford-upon-Avon, Warwickshire. He was the third of eight children and was educated at a local grammar school. When he got older, he was apprenticed to a butcher because of his father’s financial situation. In 1582, he married Anne Hathaway. Shakespeare left Stratford for London in 1588 and by 1592 had become an established actor and playwright.

While in London, Shakespeare wrote many poems including Venus and Adonis and The Rape Of Lucrece.

His Sonnets established his reputation as a gifted and popular poet of the Renaissance. Shakespeare’s modern reputation, however, was built mainly on the 38 plays that he apparently wrote, modified, or collaborated on. While he was popular in his time, Shakespeare’s plays were mostly little esteemed by his educated contemporaries, who considered the English plays of their day to be vulgar.

Shakespeare’s career took off when he bought a share of the profits in his acting company, the Chamberlain’s Men, later called the King’s men, and its two theaters, the Globe Theatre and the Blackfriars. His plays were presented at the courts of Queen Elizabeth I and King James I more frequently than those of any other dramatist. He only risked falling out of royal favor once when his company performed a play at the request of conspirators against Elizabeth. Shakespeare’s company was innocent of involvement with the conspiracy.

Shakespeare’s dramatic career is generally divided into four periods: the first being the period up to 1594, second is the years between 1594 and 1600, the third is they years from 1600 and 1608, and the fourth is the period after 1608. Because of the difficulty in dating Shakespeare’s plays and the lack of facts about his writings, these dates are approximate and can be used only as a framework to show his different styles. In all periods, the plots of his plays were drawn from chronicles, histories, or earlier work much like the plays of his contemporary dramatists.

Shakespeare’s first period was one of experimentation. Some of his earliest works include the dramas Henry VI, Parts I, II, and III, and Richard III. These plays deal with evil resulting from weak leadership and national disunity. Shakespeare’s comedies of the first period represent a wide range. The Comedy Of Errors is a farce in imitation of classical Roman comedy. It is about the mistaken identities of twins involved in romance and war. Farce is not as strongly used in The Taming of the Shrew, a comedy of character. The Two Gentlemen of Verona is about romantic love. Love’s Labour’s Lost satirizes the loves of its main characters as well as their pursuits to avoid romance.

Shakespeare’s second period includes his most important plays about English history, his joyous comedies, and two of his major tragedies. The historical plays include Richard II, Henry IV, Parts I and II, and Henry V. Henry IV is about the years immediately before those shown in the Henry VI plays. Some of Shakespeare’s comedies of the second period are A Midsummer Night’s Dream, which uses several plots with two pairs of lovers, a group of comic townspeople, and a bunch of fairies, The Merchant of Venice which uses Renaissance ideas of friendship and romantic love in opposition to inhumanity. Other second-period comedies are Much Ado About Nothing, As You Like It, Twelfth Night, and The Merry Wives of Windsor. His two major tragedies of the time are Romeo and Juliet and Julius Caesar. Romeo and Juliet is one of Shakespeare’s most famous plays and so is Julius Caesar.

Shakespeare’s third period includes his greatest tragedies and his dark comedies. The tragedies of this era include Hamlet, Othello, King Lear, Antony and Cleopatra, and Macbeth. Hamlet is perhaps his most famous play, and it exceeds by far most other tragedies. Othello portrays the growth of jealousy in Othello of his wife Desdemona. King Lear was written on an epic scale and deals with the consequences of the irresponsibility and misjudgment. Antony and Cleopatra is about the love between Roman general Mark Antony and Egyptian queen Cleopatra. Macbeth deals with the tragedy of a man who succumbs to ambition. During this time, Shakespeare also wrote Troilus and Cressida, Coriolanus, Timon of Athens, All’s Well That Ends Well, and Measure For Measure.

The fourth period of Shakespeare’s work includes his main romantic tragicomedies. Later on his career, Shakespeare created plays that offered redemption and hope for the human condition. These plays were written with a grave quality, but they ended happily with final reconciliations. The play Pericles, Prince of Tyre concerns the loss of the title character’s wife and the persecution of his daughter. After many adventures, he is reunited with is loved ones. In Cymbeline and The Winter’s Tale, characters suffer a lot but are then reunited. Shakespeare’s last complete play was The Tempest, in which the resolution suggests the beneficial effects of the union of power and wisdom.

Until the 18th century, Shakespeare was mainly thought to be no more than a rough and untutored genius. People thought that his plays had actually been written by someone more educated. Since the 19th century, Shakespeare’s achievements have been more and more recognized, and he has become regarded as the greatest dramatist ever. 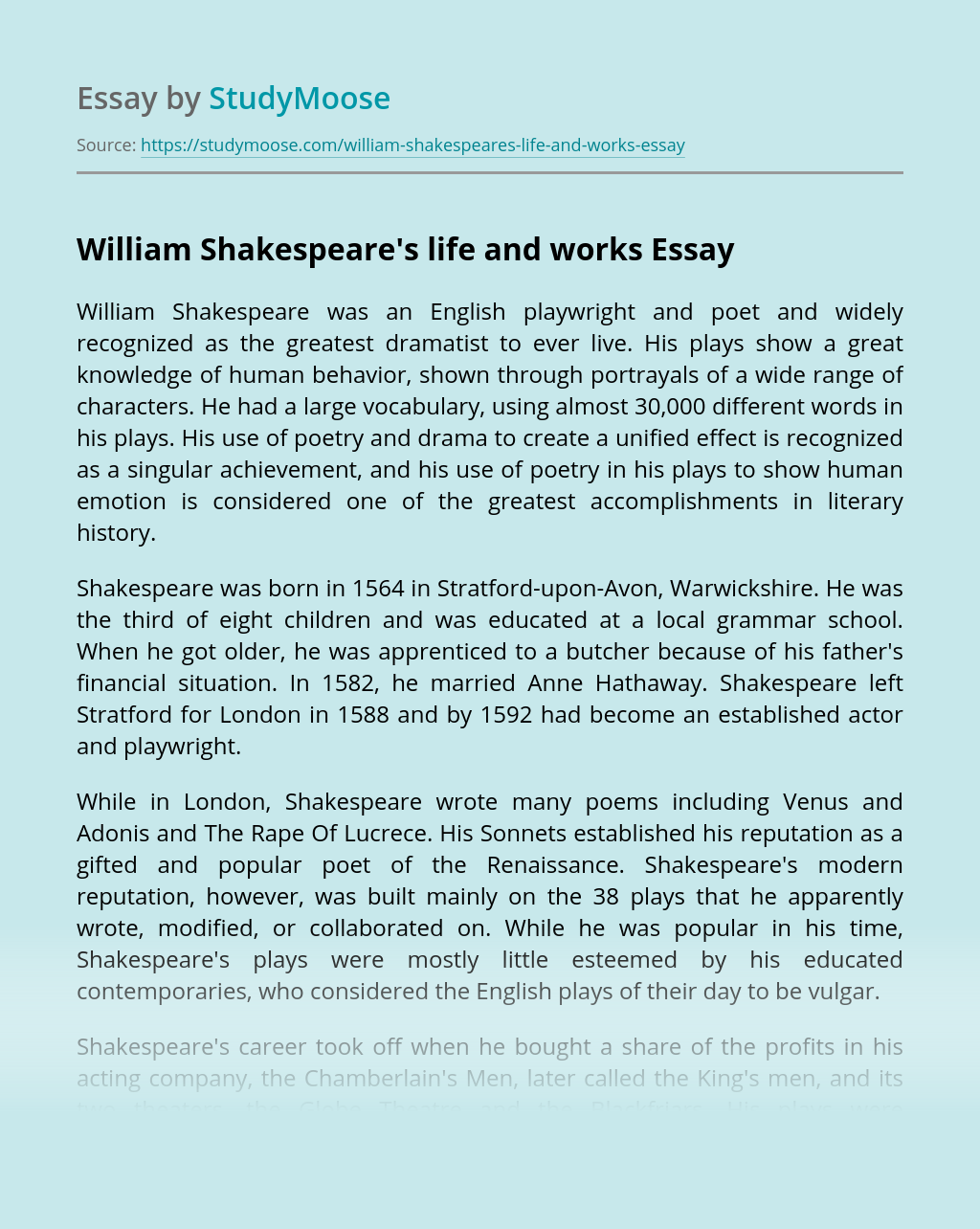 William Shakespeare and His Works

Rate this post William Shakespeare was born on April 23, 1564 in the house of John Shakespeare and Mary Arden at Stratford-on-Avon. He was educated at the King Edward IV Grade School in Stratford, where he found out Latin and a little Greek and check out the Roman dramatists. At eighteen, he wed Anne Hathaway,...

Rate this post William Shakespeare is arguably one of the most famous writers of all time. He has written thirty eight plays, two narrative poems, several other poems and one hundred fifty four sonnets. Some of his most famous poems are Hamlet and Romeo and Juliet. Those two poems are just a few of the...

Get Essay
How does Shakespeare present love and hate

Rate this post Shakespeare wrote the play of two lovers’, Romeo and Juliet. Thought to be, one of the greatest, tragic love stories of all time, however, throughout the play, Shakespeare contrasts love with hate at every possible moment. The two themes, love and hate, are like twins separated at birth, brought up in different...

How does William Shakespeare create tension

Rate this post From the minute the play starts the audience are aware that the “star crossed lovers” Romeo and Juliet are going to die, this makes it clear that the play is a tragedy. A Tragedy is a traditional form of theatre where the main characters in the play die as a result of...

Shakespeare's Romeo and Juliet and the city of Sarajevo

Rate this post Who would have thought? A classic tale of two lovers swept away in a fight that they didn’t want any part of brought to life. It’s happened; maybe even different times other than with Bosko and Admira. The similarities between Shakespeare’s Romeo and Juliet and Sarajevo’s Romeo and Juliet are eerie. Fights...

Rate this post The origins of Shakespeare’s play “Romeo and Juliet” are relatively unknown. It’s hard to believe, but this archetypal theme of ill-fated love predates Shakespeare by more than a thousand years. The Merriam-Webster dictionary defines “archetype” as: the original pattern or model of which all things of the same type are representations or...

Rate this post Lysander and Hermia, Demetrius and Helena, Titania and Oberon, Pyramus and Thisbe 1) Exposition: Lysander and Demetrius both want Hermia’s hand in marriage – Lysander because of love, Demetrius because of the position and power it would afford. Demetrius wants to marry Hermia to gain her father’s favor, along with his power...

Rate this post My Mother has just spoken with me about marriage to man called Paris. But ‘it is a honour I do not dream of’. I just cant believe that my parents want to marry me off so young, I was only considering it to keep my parents happy, but this evening changed my...