How William Shakespeare has written Macbeth?

Macbeth at the beginning of the play is told by the captain to King Duncan how fearless and brave he was.

This makes us feel admiration towards Macbeth and also highlights how fearless he seems.

Don't use plagiarized sources. Get your custom essay on
“ How William Shakespeare has written Macbeth? ”
Get custom paper
NEW! smart matching with writer

‘Disdaining Fortune’ is Macbeth defying luck with ‘brandished steel’ fighting through the horde of the enemy in battle. The captain also says

Macbeth is described to be a soldier who is brave and strong fighting his way out of a group of enemies towards his main objective. ‘carved’ is effective because it gives us a image which shows how he seems to be fighting through, as if he with his sword is easily swiping away the enemy that are foolish enough to face up to him.

This also highlights how ambition is a trait of his character. This makes him seem admirable because it then tells us how he is strong and brave and this is without even being introduced to the character in the play.

Macbeth when we are first introduced to him is seen walking across the battlefield with his friend Banquo. The three witches who serve to highlight the supernatural element of the play prophesise about Macbeth and Banquo.

They say Macbeth has now taken place of the traitorous Thane of Cawdor and will eventually become the king of Scotland. Banquo is assured he will be lesser than Macbeth but happier as his children will become kings. Macbeth ponders on the prophecy,

‘Commencing in a truth? I am Thane of Cawdor.

If good, why do I yield that suggestion,

The reader can be uncertain of Macbeth at this point, Macbeth is thinking about the murder of Duncan which would make him the king quicker than simply waiting for him to be crowned. The ambitious trait of his character makes him think about this, but ‘horrid image doth unfix my hair’ is him quickly dismissing it blaming himself for thinking of such a horrible deed to do. This is built on with

‘My thought, whose murder yet is but fantastical,

Shakes so my single state of man that function

Is smothered in surmise, and nothing is,

Which is Macbeth thinking of possibly killing Duncan but it makes him anxious at the thought of it. ‘fantastical’ is a effective use of word choice because he shows he is constantly thinking about it, but ‘shakes’ shows how it makes him so anxious that he will dismiss it as a fantasy. We have seen Macbeth to be regarded as a fierce and noble person who serves loyally for his country, but now we are uncertain about him. He thinks of the prophecy the three witches have given him and he constantly thinks of the thought of killing Duncan. Macbeth tries to block it out of his mind as dismissing it as a fantasy but his own ambition will not allow him, he wants to the position of king so badly but is afraid to carry it out. Lady Macbeth is introduced here by reading a letter sent to her by Macbeth, he tells her of the prophecy and she then begins to dream of him becoming king, she realises the same as Macbeth. Duncan will have to be killed in order for Macbeth to become king. Lady Macbeth then begins to manipulate Macbeth in to trying to get him to murder Duncan.

Macbeth is now so ambitious and blinded by the love for Lady Macbeth that he will now kill Duncan in order for him to become king and not to disappoint Lady Macbeth who manipulates him and tricks him into to doing this.

Macbeth has committed a crime that is terrible and sick. Murdering his own kinsman was considered a terrible and damming crime once to Macbeth, but he has been horribly tricked and manipulated by lady Macbeth that we now feel disgusted at the both of them. ‘ Didst thou not hear a noise?’ shows how paranoid he is after murdering Duncan. Macbeth is seen to be crowned as the king of Scotland but the murder has terrible consequences on him, he can no longer sleep and he finds the blood always to be on his hands. Ambition again drives Macbeth to get rid of anyone that stands in his way. He plots to kill Banquo and Fleance, leaving Lady Macbeth completely out of his plans. Macbeth hires two assassins and successfully murders his best friend, but Banquos’ son Fleance successfully escapes. Macbeth has turned from noble to a traitor and completely evil. Macbeth is about to become even more evil in our eyes because he then orders the murder of his main rival Macduffs innocent family,

‘The castle of Macduff I will surprise;

His wife, his babes, and all unfortunate souls’ (Act 4 scene 1)

Macbeth says he will relentlessly attack Macduffs castle, murdering everything inside it including the poor innocent children of Macduff and also his wife. This can make us as the readers feel disgusted again with Macbeth because he is so fixated with ambition and his wife who is now the weaker character of the two, that he will slay anything that stands in the way of true power. He is now completely evil, he is strong and powerful more now than lady Macbeth but he is also evil and a traitor.

There is some sympathy towards Macbeth at the end of the play. He was wrong about the second prophecy from the witches and there is now a army summoned by Duncan and Macduff ready to take revenge on Macbeth. Lady Macbeth has gotten worst in her health and has become depressed and insane causing her to commit suicide. Macbeth promises he will fight to his death

This can restore some feelings of admiration towards Macbeth, he has heard the news of his most loved wife has died and he will still face a army and fight to his death. It shows he is still fierce and brave. In battle with Macduff he says

‘I throw my warlike shield. Lay on, Macduff,

What Macbeth says here is full of passion and anger. We feel slight admiration for him as he is fighting relentlessly reminding us of how he was at the start, a warrior that will fight to serve his country, but this time he has nothing to lose, so we also sympathise with him in that sense. Macduff has managed to kill him in the end but Macbeth would have died sooner or later. The fact that he was determined to fight rather than die a coward proves how much of a good warrior he was serving Scotland.

William Shakespeare has taken us through the play with various emotions towards Macbeth on his actions. At the start we see him through other characters to be a brilliant warrior and loyal towards his country. Though when we first meet Macbeth and he has heard the prophecy from the witches we begin to feel uncertain towards him, unfortunately Lady Macbeths and ambition manipulates him to become a evil person who will murder anyone. We sympathise for him towards the end as he fights to his death with nothing to lose since his beloved lady Macbeth has killed herself. Shakespeare has done this wonderfully with writing effective pieces of imagery and word choice that help convey his character in different parts of the play.

How William Shakespeare has written Macbeth?. (2020, Jun 02). Retrieved from https://studymoose.com/william-shakespeare-written-macbeth-new-essay 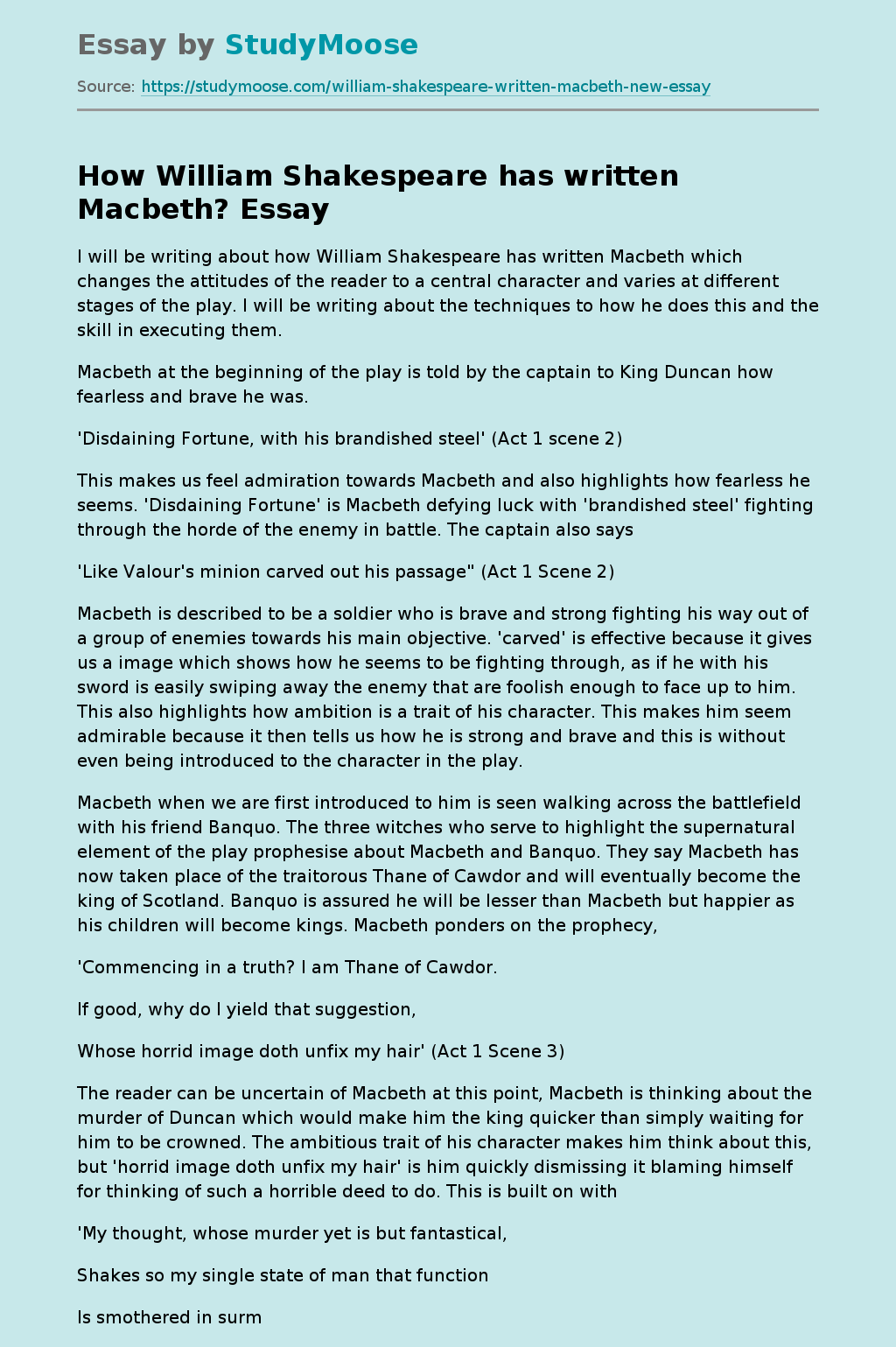