William Shakespeare: as You Like It, a Pastoral Comedy

As You Like It is a pastoral comedy by William Shakespeare believed to have been written in 1599 or early 1600 and first published in the First Folio, 1623. The play’s first performance is uncertain, though a performance at Wilton House in 1603 has been suggested as a possibility. As You Like It follows its heroine Rosalind as she flees persecution in her uncle’s court, accompanied by her cousin Celia and Touchstone the court jester, to find safety and eventually love in the Forest of Arden.

Don't use plagiarized sources. Get your custom essay on
“ William Shakespeare: as You Like It, a Pastoral Comedy ”
Get custom paper
NEW! smart matching with writer

Historically, critical response has varied, with some critics finding the work of lesser quality than other Shakespearean works and some finding the play a work of great merit. Shakespeare’s themes are often expressed in terms of oppositions, such as the conflicting values associated with fair and foul in Macbeth. As You Like It is no exception. Running throughout As You Like It is a tension of antithesis between the natural (that which is free, spontaneous, and wholesome) and the artificial (that which is constrained, calculated, and unnatural).

The clash between these two ways of life is seen on several levels: (1) social: in the values associated with civilized society (the court or a great country estate) compared with the value of simple living (the open pastures and the forest encampment); (2) familial: in the strife that sets brother against brother and parent against child; and (3) personal: in the contrast between courtships that are based upon genuine emotion (Orlando and Rosalind) and those that are based on formal conventions (Silvius and Phebe).

These various levels are not kept distinct in the play, however, and disorder in one area is likely to parallel disorder in another. The first scene of the play introduces us to organized life on a country estate. Here the close ties that should unite brothers have been perverted. The unnaturalness of the situation is made clear in Orlando’s opening speech. He has been kept from his modest patrimony, his gentle birth has been undermined, and he speaks of “mutiny” and “servitude.

” Oliver’s brutal treatment of the faithful servant Adam, whom he addresses as an “old dog,” shows that the disorder affects other members of the household as well. In the same scene we learn of an earlier, parallel perversion of normal family life, but here the roles are reversed, with the young men’s father, a younger brother abusing his older brother. The wrestler, Charles, reports that “the old Duke is banished by his younger brother, the new Duke. ” On the social level, the corruption of the great estate is matched by the debasement of court life.

But in opposition to these sinister currents, we witness a strong element of harmony between relations: Celia loves her cousin Rosalind so much that she will follow her into exile or else stay behind with her and die. And we learn too of a harmonious social order established by the banished Duke Senior and his “merry men” in the Forest of Arden. Thus the opposition between court and country, the natural and the artificial, is established at the outset of the play. In Act I, Scene 2, the corruptions of court life are overtly shown; there is little subtlety here.

For example, the clown speaks jestingly of a knight without honor who has nevertheless prospered under Frederick, the reigning duke. Not long afterwards, Orlando, who has just won the wrestling match, is denied the honor due him for his triumph because his father, whom “the world esteem’d . . . honourable,” was the usurper’s enemy. The natural values subverted in the earlier scenes find glowing representation in Act II, Scene 1 — that is, “painted pomp,” “the envious court,” and “public haunt” give way to the uncomplicated rewards of a life close to trees and running brooks.

Here, the banished Duke Senior and his “co-mates and brothers in exile” find their existence “sweet. ” But to achieve full contentment they have had to adjust themselves to the natural hardships of their lot — “the icy fang / And churlish chiding of the winter’s wind. ” The pattern of accommodation is one that the various fugitives in the Forest of Arden go through; to them, the forest at first appears wild rather than green, and threatening rather than hospitable. Rosalind complains that her spirits are weary; Celia is too exhausted to continue; Touchstone frankly declares, “When I was at home, I was in a better place.

” Orlando and Adam almost starve, and Orlando speaks of the “uncouth [rough] forest,” “the bleak air,” and “this desert. ” But all of these characters eventually make their peace with the forest, and even the tyrant, Duke Frederick, is converted when he comes “to the skirts of this wild. ” For Orlando, the reconciliation is effected when he, along with Adam, joins Duke Senior’s feast. The grand movement of the play, then, is from organized society to the country, from constraint to freedom, and from hardship to joy.

Shakespeare’s Forest of Arden furnishes the setting against which most of the action unfolds, but it serves as much more than a mere backdrop. The greenwood assumes symbolic stature. First of all, it is an “idyllic forest. ” The words used by Charles to describe Duke Senior’s life in the forest suggest an idyllic existence, and in the famous pastoral romances of Shakespeare’s day, a world is created in which shepherds and shepherdesses sing, pipe tunes, and make love while their flocks graze carelessly in green valleys bright with the sunshine of eternal summer.

This golden world, needless to say, has little relation to the actualities of country living in any age, yet it is the artist’s fulfillment of the universal longing to flee burdensome realities and find quietude and peace. In Shakespeare’s time, no less than in ours, people felt the need for just such an escape. This idyllic concept of Arden is introduced, as was noted, by the rumor reported by Charles in the first scene, and to this Forest of Arden (a name that has since become synonymous with a forest utopia) belong such creatures as Silvius and Phebe, whose names and behavior link them to later Acadian literature.

These characters are absorbed entirely in the sighing disquietudes of love, as only the shepherds and shepherdesses of romance can afford to do. If Silvius and Phebe find their places in Shakespeare’s complex Arden, their romancing is presented as frankly artificial,in contrast with both the elemental, biological basis of Touchstone’s pursuit of Audrey and the profoundly felt love experienced by Rosalind and Orlando.

William Shakespeare: as You Like It, a Pastoral Comedy. (2016, Sep 20). Retrieved from https://studymoose.com/william-shakespeare-as-you-like-it-a-pastoral-comedy-essay 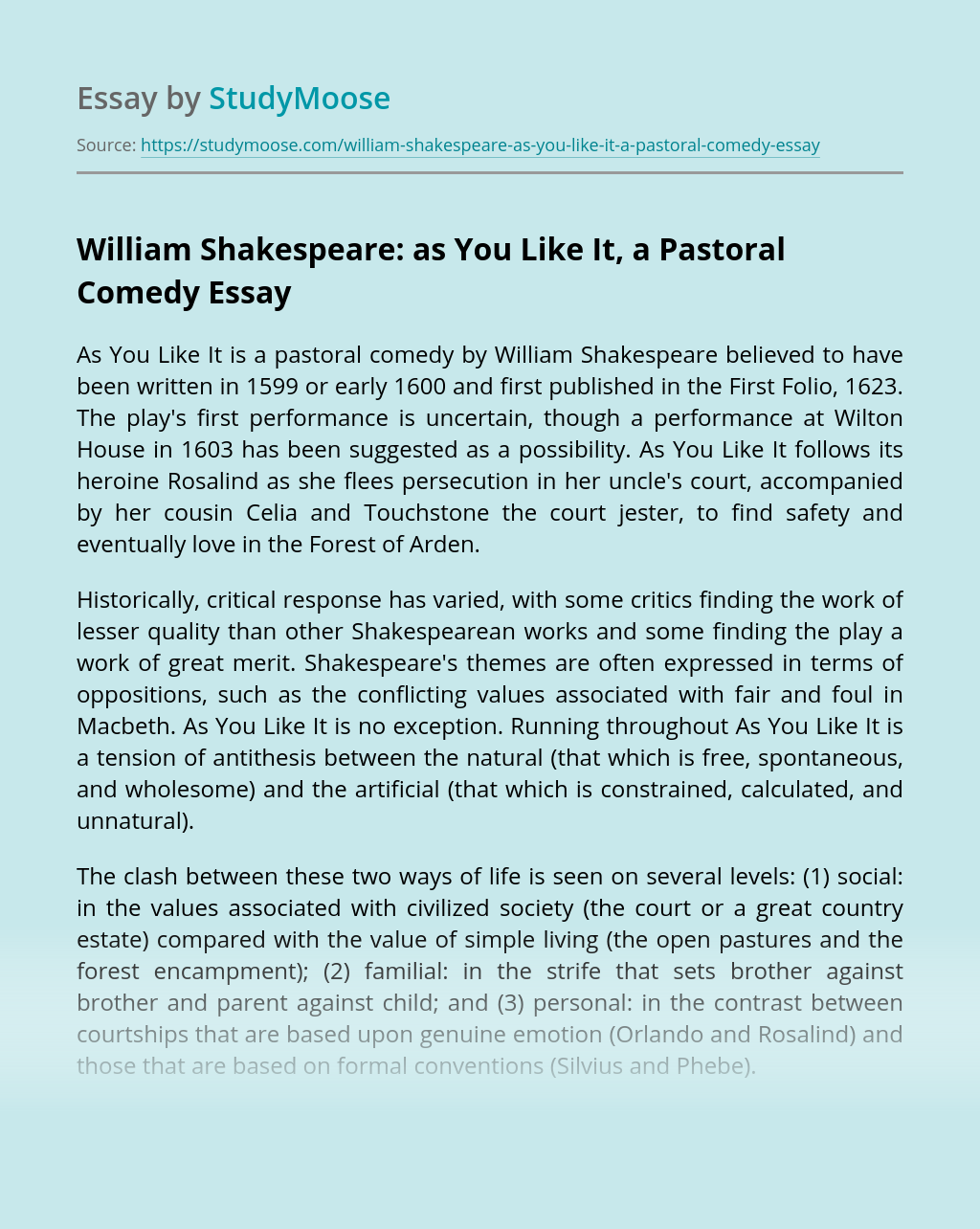