William Blake in Contrast of Songs of Innocence and of Experience

William Blake, an engraver, exemplified his passion for children through his many poems. Blake lived in London most of his life and many fellow literati viewed him as eccentric. He claimed to have interactions with angels and prophets, which had a great influence on his outlook of life. Blake believed all prominent entities, those being church, state, and government had become sick with greed and hatred; and Christianity had somehow failed. According to Jeffery Bell in Industrialization and Imperialism, 1800 – 1914 “Blake’s simple language and use of vernacular spoke to the rebellion against established order and authority.

Don't use plagiarized sources. Get your custom essay on
“ William Blake in Contrast of Songs of Innocence and of Experience ”
Get custom paper
NEW! smart matching with writer

Blake’s reputation seems to be firmly established in the counterculture as a prophet, visionary, and exemplar. Critics and scholars have also placed him as perhaps the first poet of the Romantic movement as its themes and concerns developed in England”(38). Blake, happily married to Catherine Boucher nearly 45 years, never had any children; yet children are an eminent theme throughout many of his poems. Blake’s compassion for children allowed him to see the world through the innocence of the young, which inspired the poems of Songs of Innocence.

This same passion prompted the poems of Songs of Experience.

Essentially, Blake illustrated through comparison the striking contrasts between companion poems that portray common scenes. Blake wrote Songs of Innocence, a collection of poems as seen through a child’s point of view. According to Blake in The Longman Anthology British Literature, “childhood is a time and a state of protected innocence, but not immune to the fallen world and its institutions”.

(163) Blake exemplifies the innocence and purity of a young child in his poem The Lamb, from Songs of Innocence. The child believes that he and the Lamb are the same. The Lamb, in this poem, signifies Jesus, Lamb of God.

What the child does not understand, being so innocent, is that the Lamb is sacrificed, just as Jesus when he was crucified. Another display of sweet innocence is in the poem Infant Joy. This poem displays the joy and happiness between a mother and her newborn infant. The mother sees her delightful child and it brings her such joy that she names the child Joy. This poem could also represent a lullaby that the mother is singing to her newborn infant while deciding what to name her. Whatever the meaning, this poem exuberates childlike, happy sediments to its readers. Another touching poem from Songs of Innocence is The Chimney Sweeper.

Blake’s verbally silent outrage against social injustice and his compassion for children prompted him to write this poem. Blake could not comprehend why society allowed so many young children to be exploited, as if their little souls should never have existed. In this poem, Tom Dacre’s innocence sparks his imagination, which sends him on a journey in search of joy and happiness. Tom awakes feeling rejoiced knowing that if he is good he will have God for his father and will always be happy. A lot of the poems in the Songs of Innocence were based on sweet children looking for a happy ending.

Blake felt so strongly about the injustice of economically disadvantaged children, and how they must feel, that a few years later, he wrote yet another set of poems, The Songs of Experience. According to Marilyn Butler in Hamlin Phillips, William Blake, says that Songs of Experience is “a fully adult politicized sequel” to the Songs of Innocence, and “reflects the intense intellectual activity of the contentious revolution years” (16). In this sequel, William Blake wrote several poems, namely The Tyger, Infant Sorrow, and The Chimney Sweeper, just to name a few. The Tyger, arguably Blake’s most famous poem, describes a creature of brutal and terrifying strength” (Hamlyn and Phillips 268).

In addition, this poem questions how God could unleash such cruelty onto the world. This poem confuses us as to who created such a creature. Was it God, the presumed creator of all? This poem implies that it could possibly be Satan. The “distant deeps” and “burnt the fire of thine eyes” suggest its creation in hell. The mystery behind Blake’s poem is left to the interpretation of the reader. Another poem from Songs of Experience is Infant Sorrow.

This poem represents childbirth, and the pain associated with it. In addition, it signifies the uncertainty the child feels entering into unknown surroundings. The baby is swaddled and placed into the arms of what he feels is a stranger (his father) and laid upon his mother’s breast to sooth him. Blake’s analysis of childbirth allows the reader to experience the possible perspective of an infant as it enters the world. Blake’s unique way of writing challenges his readers to analyze each poem wondering if their interpretations are correct. Finally, years later, Blake wrote another rendition of The Chimney Sweeper.

This time the child is considered experienced. The child, no longer innocent, understands his hopeless situation. He realizes his parents have purposely surrendered him to a life of despair. The child speaks the truth without any dreams or thoughts of rescue. Blake depicts the child’s senseless pain and suffering, in hopes of helping to eradicate child labor. Most of these poems mentioned from the Songs of Experience, are free from imaginary dreams and happy endings. Blake wanted his readers to connect with both the Songs of Innocence and Songs of Experience.

These poems, although different, complement each other. The contrasts and comparisons contained Blake’s work are very in-depth and complex. These poems present various states of mind for common subject matter. In some instances, very young children seem to have lost their innocence quickly after minimal contact with the world, while other adults are able to carry their innocence well into adulthood. The continued comparison of innocence and experience illustrated by Blake’s work exemplifies how contrary possibilities may co-exist through multiple dialogues in different poems.

Blake’s poem, The Lamb, is written to display the innocence and purity of a young child who is meek and lamb like. His poem The Tyger, depicts a brutal creature with terrifying strength. The Lamb, is likened to Jesus who was created by God, while The Tyger, questions why the same God would create and release such a creature into the world. This poem continues to mystify us as to who actually creates this tyger and goes so far as to imply that it may have been Satan. Blake continues his complex comparison with the poems Infant Sorrow and Infant Joy. Both poems center on the act of childbirth.

While Infant Joy, portrays the delightful, elated perspective of an infant birth, Infant Sorrow describes an infant birth void of happiness. The poem speaks of anguish and misfortune of a child’s birth. Blake’s poem the Chimney Sweeper, has two renditions. One from the perspective of innocence, while the other is taken from the perspective of experience. In the initial poem, a young boy’s innocence and imagination allow him to journey outward to find joy and happiness. The child believes that continued good behavior will allow him God for his father and happiness always.

The sequel portrays the boy as experienced. Lost is the innocence that allowed for imagination and happiness. The boy grasps all too well the hopeless nature of his situation. He now realizes that he lives a life of despair and when he speaks, there are no thoughts of his rescue. Blake wrote these poems that revealed his true inner emotions in addition to descriptively illustrating for the reader two distinct contrasting perceptions of the same subject manner. Although his professional vocation was as an engraver, Blake is remembered primarily for his writings.

Known historically as the first poet of the Romantic Period, his poems proved to be a great means of reading entertainment. It is quite clear that he desired to have society become aware of child exploitation and abuse. I contend that Blake wanted his readers to realize that both good and evil exist. Through his poems, Songs of innocence and Songs of Experience, these duel perspectives require the readers to interpret for themselves their preferred understanding of each poem. Ultimately, the common parallels of these poems allow the essence of each perspective within the poem to reveal itself.

William Blake in Contrast of Songs of Innocence and of Experience. (2016, Nov 29). Retrieved from https://studymoose.com/william-blake-in-contrast-of-songs-of-innocence-and-of-experience-essay 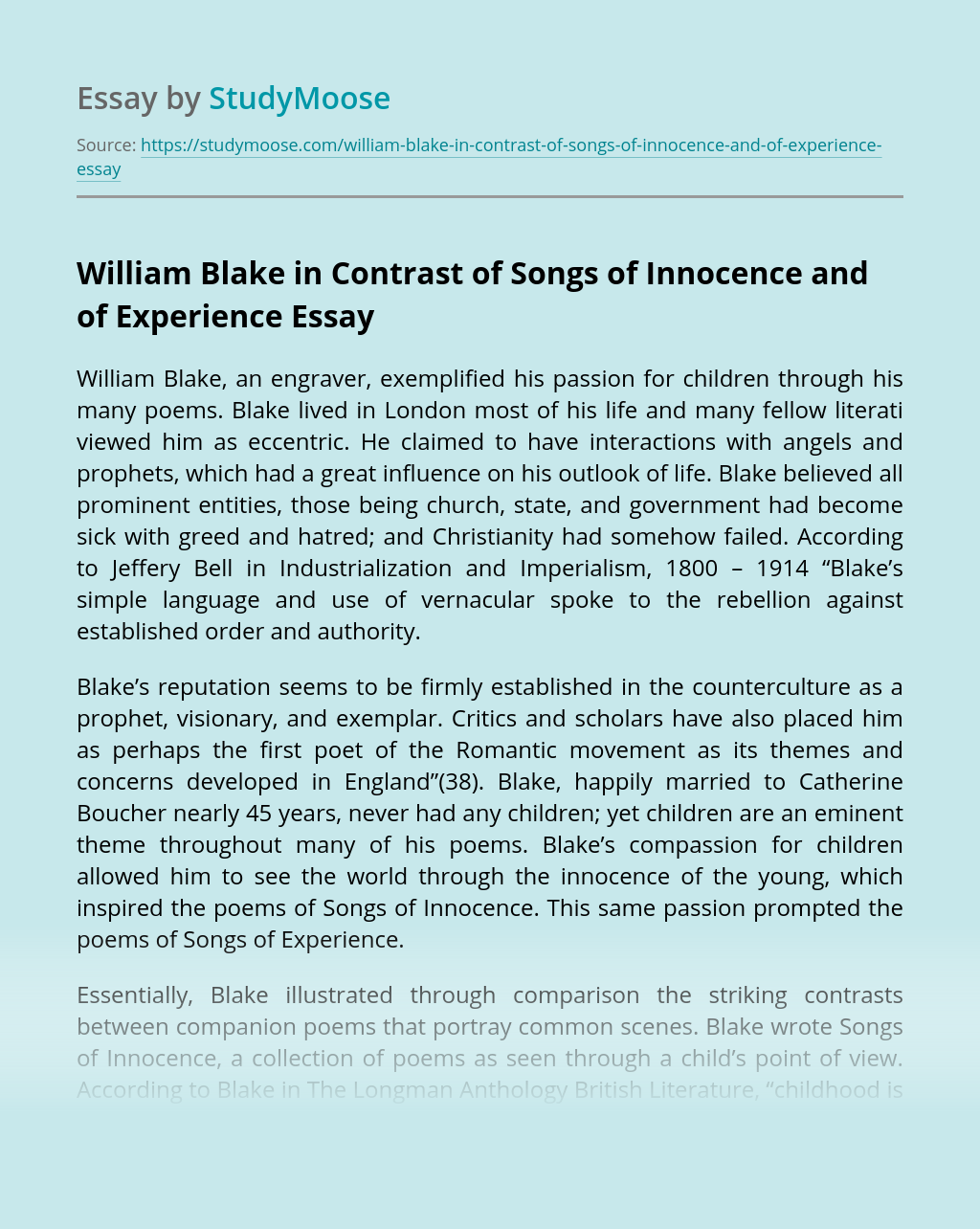