Will be Whether it's Cultural or Genetics Factors That Have the Greatest Influence When It Comes to Gender Norms.

The question I’ll be exploring will be whether it’s cultural or genetics factors that have the greatest influence when it comes to gender norms. Let’s look at how social factors shape gender roles.

Firstly early childhood is indeed an important period for the cognitive development of a person. It’s at this stage that a person starts to develop their communicative, emotional and cognitive abilities. It’s also arguably through these first years that a child gets exposed to the gender norms in society and also it’s at this age that these norms are further reinforced by media or their friends and family back at home.

Don't use plagiarized sources. Get your custom essay on
“ Will be Whether it’s Cultural or Genetics Factors That Have the Greatest Influence When It Comes to Gender Norms. ”
Get custom paper
NEW! smart matching with writer

these exposures can be subtly numerous. Like recognising some societies and the expectation that is required from women. For example in Belgium, Often girls are told not to wear clothes that are a bit too exposing so as not to risk getting seen as “too easy” or “prostitutes” which regularly sometimes indirectly conveys the message that it would make them more likely a potential victim of sexual violence.

Also, the less equivalent goes for boys. For example in Somalia, if two boys were fighting. No one would intervene because it’s a norm that boys fight a lot. People in nearly in all cases dismiss this by saying this common phrase “boys are just being boys”. it’s through this process that children get exposed to gender norms in their societies.

Some argue the contrary. The contrary being nature determining a great portion of our biological behaviours rather than nurture.

This is arguably the same process that is self-evident in our early ancestors. Who lived in the Paleolithic era. Where they lived in a hunter-gatherer society. It’s also where the least social had the least chance to survive in the group. Through this same process of evolution we adapted and through adaptation, evolved to be more social than we were. It’s also the same evolutionary process which explains the strong relationship between the genders. The theory is that because each gender shares the same physiology and anatomy, they have many psychological characteristics in common too. In the same way that genes and hormones determine a person’s sex, they also determine whether a person will behave in a more feminine or masculine manner. Over the earlier times that humans existed the females were predominantly the caregivers while the males were the providers. Which make the following theory for some people accurate. Why women choose fields that are predominantly more social and are commonly in the category of nurturing and caregiving is because they are genetically more inclined to find comfort and satisfaction from the acts of helping and nurturing.

With it not being a norm for women to seek a profession until the prior century, many career options are viewed as “male jobs”. Young women have been imagined to go after more feminine professions that require a shorter time and flexible work, but not all women desire that.

But even when they pursue these particular professions, they are paid less than their male counterparts for doing the identical job. This event has been obvious in all industries, from actors and actresses to Google staffers.

One of the many problems facing women who are trying to enter and thrive in certain fields has been sexual harassment. With the rise of the #MeToo movement, we have been confronted with a problem that was silenced for many years. At least 25% of women encounter sexual harassment in the workplace and fail to report it because it is exactly their bosses who harass them. Therefore there have been arguably fewer advancements when it comes to gender equality over the last 5 years. Which is not enough because a survey poll from Morning Consult shows that just about 20% of women and 33% of men say things have grown better for women in their companies in the last five years. with that, I shall conclude with my final thought on the topic.

From a cultural standpoint, we have come so far historically speaking. Just as we have progressed from culturally backward societies to the modern-day. It’s only through the same rigorous process of progression can we continuously shape a better tomorrow.

Will be Whether it's Cultural or Genetics Factors That Have the Greatest Influence When It Comes to Gender Norms.. (2019, Nov 20). Retrieved from http://studymoose.com/will-be-whether-its-cultural-or-genetics-factors-that-have-the-greatest-influence-when-it-comes-to-gender-norms-essay 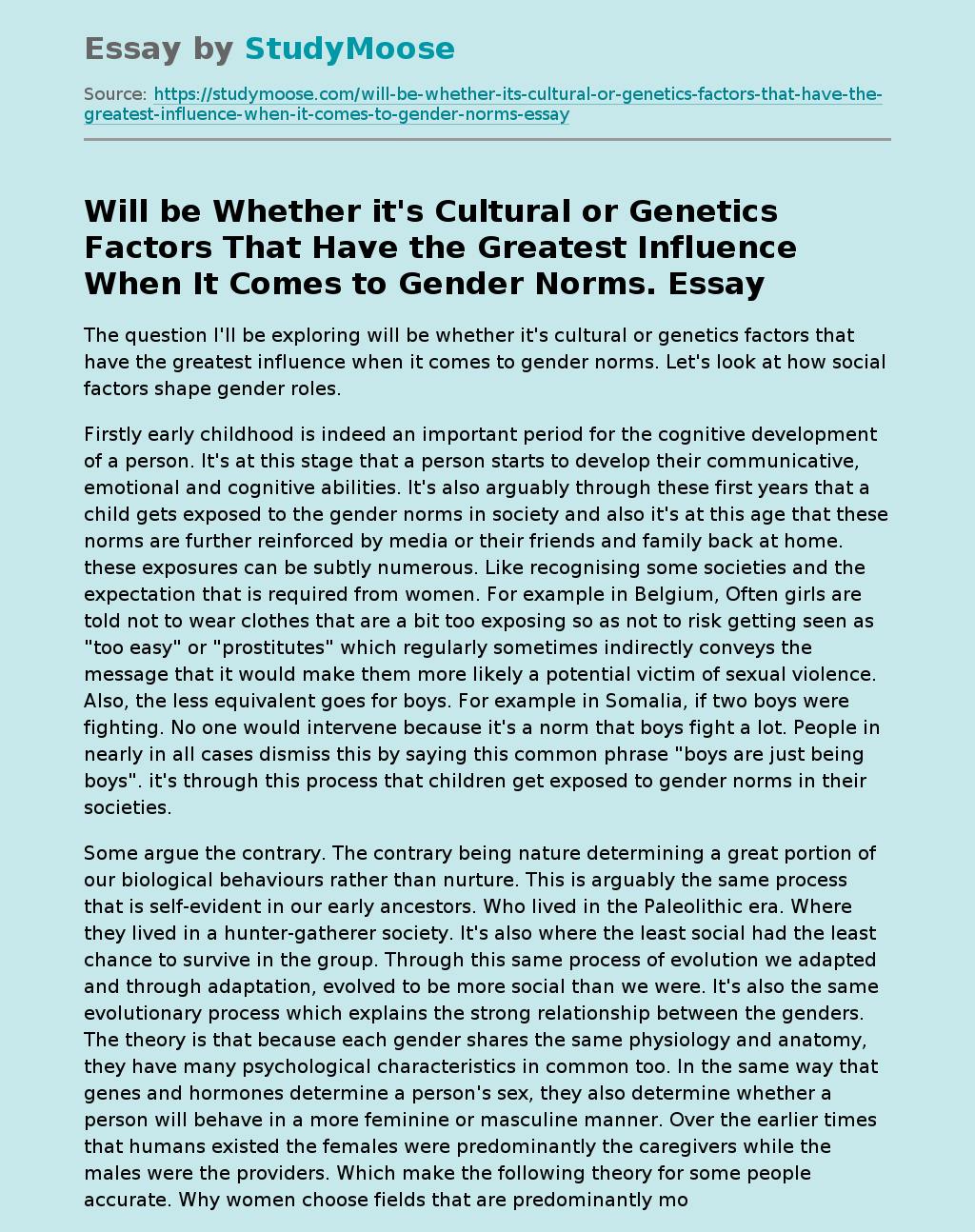