Wide Sargasso Sea is post-colonial novel of the Caribbean Jean Rhys, a mid-20th-century novelist who was born and grew up in the Caribbean island of Dominic and then settled in England from the age of 16. As a white Creole author living in England, Rhys attempts to depict the issue of being caught between two cultures and never able to identify fully with any of them, as Rhys was white but not English, West Indian but not black. Rhys presents the female protagonists struggles with oppression inflicted from herself to conform to the demand of society, her inability to identify herself within the boundaries of society cause her inevitable isolation from her world.

Don't use plagiarized sources. Get your custom essay on
“ Wide Sargasso Sea is postcolonial novel of the Caribbean Jean Rhys a ”
Get custom paper
NEW! smart matching with writer

McEwan’s ‘On Chesil beach ‘ on the other hand is set just before the sexual revolution of the 1960s , a time of transition to a more liberal society as well as time of innocent ignorance to the phenomenon of sex and maintained order from social constraints nonetheless both explore how the macrocosm, which is society, affects the microcosm (relationships) directly or indirectly.

The foundation of society was constructed by the unspoken norm of division by class, from 1830s Jamaica to 1960s England. Rhys’ Wide Sargasso Sea displays the marginalised condition of women, in the oppressive male dominated society and issues including colonialism, race and mental illness – Whilst Rhys draws a tragic ending to the believed to be mad women in the attic and presents the struggles with male dominance , McEwan on the other hand portrays Florence as ahead of her time in her ability to sustain a serious career in a profession largely associated with the opposite sex.

McEwan depicts how the fragmentation of the female protagonists, Antoinette and Florence’s identity is associated with the concept of entrapment, McEwan conveys how Florence’s lack of intimacy with her family when she succumbs to feelings of hopeless encountering sexuality: “She had never kissed or embraced Florence, even when she was small’. It could be suggested that Florence’s issues with sexual intimacy may be a consequence of her mother Violet’s undemonstrative nature. Florence forms an apparent close bond with her father, this bond could be responsible not only for her many intellectual and personal passions but also for her intense sexual anxieties. Alienation of generations were enticed when we find Florence struggles to balance meeting the social standard of being a women of the 1960s English society and proposes the greatest issue to their relationship is the taboo of sex; Florence cannot get past these upper-class implications and is permanently haunted by the bride’s manual, with its garish red converse and talk of mucus and glands. McEwan links the lack of communication between Florence and Edward to the era, a time when discussions about sexual difficulties were simply impossible. It can be implied that the failure for communication in the marriage is partially due to the extremely conservative environment which restricted them voicing emotions. Psychoanalyst, Klein, emphasizes the impact of early relationships on future relationships, this vital relationship of parent-child shapes the young individual’s manner and thus the basis of future of future relationships. Consequently, if there is weak communication relying on object relation theory helps us to gain a better understanding of the ways both Rhys’ and McEwan’s characters interact with each other in their thoughts, behaviour, and actions. McEwan’s conveys how the expectations of adhering to the rules of class and social background on a child, divides the relationship of parent and child which according to nature should be based on the foundation of unconditional love and becomes withered to something where children are thriving for the slightest nod of approval from their parents. Whilst Rhys’ demonstrates Annette’s dissociative attitude contributes to her daughters’ feelings of abandonment and worthlessness – eventually resorting in her no longer even attempting to identify a bond between the two. It can be suggested that the evident decline in her mother’s metal health foreshadows her own demise to be that of her mothers. Similarly, to Rhys’ female protagonist, Florence fails to achieve a satisfying past relationship with her mother, thus leading her to develop abnormal anxiety therefore connoting that she is unable to have intimate relationship with others. Like Florence, Antoinette suffers uncertainty of identity from childhood as she is caught between the Black community and the White community – Rhy portrays how Antoinette utilises her friendship with Tia, her only companion in life, as a form of finding herself an identity. However, the novelist soon portrays Antoinette’s inability to identify with the black community as her companion is an epitome of how much the black people had rejected her kind. Rhys presents this through the young black girls derogatory and racially offensive language, calling her a ‘white nigger ‘, a hybrid who has no place in the community. Rhys’ protagonist is left to become the ‘other’ who is unable to completely belong to any community as a result she is maligned by both black Caribbean’s and White community. Tia’s vile behaviour towards her Creole companion displays how controlling racism was in society. It can be suggested that the discrimination from the black community is as vengeance for the enslavement of their community This isolation from society is reminiscent of Rhys’ own childhood as she too was a mixed-race Caribbean woman, who like her character Antoinette was tormented with the humiliation of being labelled as a ‘white cockroach’ – much like her character Rhys’ personal identity mingles between European (welsh) heritage and thus both novelist and character appear to relate with their constraint by familial relationships and the ambiguity of their identity.

Wide Sargasso Sea is postcolonial novel of the Caribbean Jean Rhys a. (2019, Nov 18). Retrieved from https://studymoose.com/wide-sargasso-sea-is-postcolonial-novel-of-the-caribbean-jean-rhys-a-example-essay 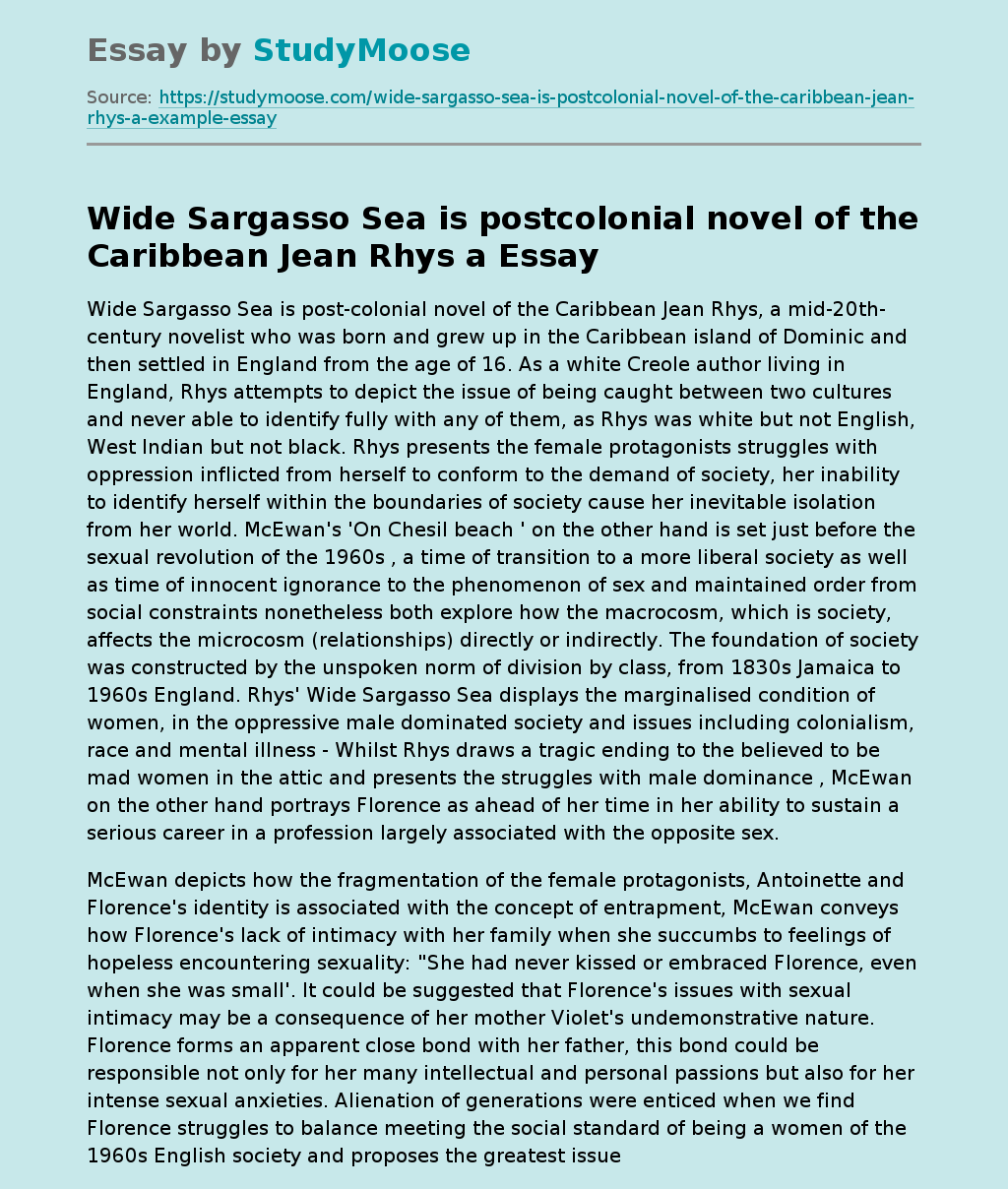