Why was France unstable during the interwar years?

Between 1920 and the fall of the Third Republic in May 1940, France had seen 44 different governments and over 20 Prime Ministers. The divide between Right-wing and Left-wing parties at the time was bigger than ever before. So many political parties made it difficult to accomplish stable government during this period. The country was faced with huge losses in manpower and economic destruction after the war, despite being one of the victors. The country was mourning the loss of an entire young male generation.

Don't use plagiarized sources. Get your custom essay on
“ Why was France unstable during the interwar years? ”
Get custom paper
NEW! smart matching with writer

With the onset of the Great Depression, the French people felt the democratic system had failed them and so they looked to extremist organisations to lead them. As the international situation was worsening, it became clear that the instability in France from 1920 to 1940 meant the nation was divided, depressed and in danger of being captured by the Germans in 1940. Immediately after the First World War, there was a period of political instability with the election of four different Prime Ministers in three years.

Suprisingly, Georges Clemenceau, despite having lead his country to victory in the Great War was not elected as president.

The anti-Socialist lawyer, Raymond Poincare, brought stability to France until forced to resign after he proposed tax increases. Cartel Des Gauches swept to power, which was an alliance between the Radical Party in the centre and the Socialists on the left. The Radical Prime Minister, Edourd Herriot, was met with a severe economic crisis caused by the mismanagement of government expenditure. A divide in the Cartel on how to solve the crisis meant Herriot stepped down in 1926.

The demise of a government due to disagreements on a solution to France’s economic problems was an often occurrence during the 1920’s and 1930’s.

The French people always suffered as a consequence of the government’s actions. France saw huge inflation with the attempt to overcome the crisis by borrowing money. The budget imbalance was much worse and led to the collapse of the French Franc. The Wall Street Crash in 1929 brought about political and financial instability in France. Germany was no longer obliged to pay reparations to France and the earlier devaluation of the Franc meant France became a dumping ground for cheap foreign goods. The French lost a very important source of income when Germany stopped paying reparations and exports dropped by 40% between 1929 and 1932.

The Growth of Fascist Leagues posed a threat to the old democratic system in France. Some people felt the Fascists were attractive as they promised action and firmness, something previous political parties had not done. The increase in support of Fascist and Semi-Fascist leagues was seen throughout the French demographic and foreboded political instability yet to come. There were four main Leagues: Action Francaise, Jeunesses Patriotes, Solidarite Francaise and the largest of the leagues, Croix de Feu. They were mostly anti-communist, anti-Semitic or anti-democratic but not exclusively.

The Stavisky Affair of 1934 gave the far right (i. e. The Fascist leagues) an opportunity to attack the democratic system, which they were so opposed to. The Stavisky Affair was a financial scandal involving Serge Stavisky who was an embezzler of Russian-Jewish origin. Stavisky allegedly had involvement with very influential government ministers and there was speculation over government-involvement in his death. February, 1934 the right-wing leagues poured onto the streets rioting, prepared to attack the Chamber of Deputies. 14 were killed and 200 injured before the riot was ended.

Three days later the Communists held their own coup by marching through Paris, calling for a general strike. This attack on democracy was met with the left-wing parties pooling together to prevent the advancement of the Fascists Leagues. They formed the Popular Front Government under Socialist Leon Blum in 1936. This coalition of the left was said to have saved France from Fascism and from another change in government. This instability in popular political opinion meant there was constant civil unrest to come in the years ahead in the forms of strikes and protests.

Blum faced many serious economic problems and the people grew impatient with France’s slow economic recovery. Leon Blum’s government along with trade unions and employers came to the Matignon Agreement. This agreement was not successful in stimulating the French economy as it was planned. In 1937, Blum resigned. France’s foreign policies during the period 1920-40 consisted of making the Germans pay reparations and to protect the French security, both of which eventually failed.

During the inter-war years France made many military alliances with America, Britain and Eastern European countries. When these alliances were tested it appeared the terms were unclear or the alliance was no longer effective. France’s unstable foreign relations meant that in France’s time of need it had no allies. France was politically and psychologically unprepared to withstand the test of unity and common purpose that was to come with WWII. During the period 1920-40 the instability in France resulted in the eventual ruin of the Third French Republic.

Why was France unstable during the interwar years?. (2016, Jul 23). Retrieved from http://studymoose.com/why-was-france-unstable-during-the-interwar-years-essay 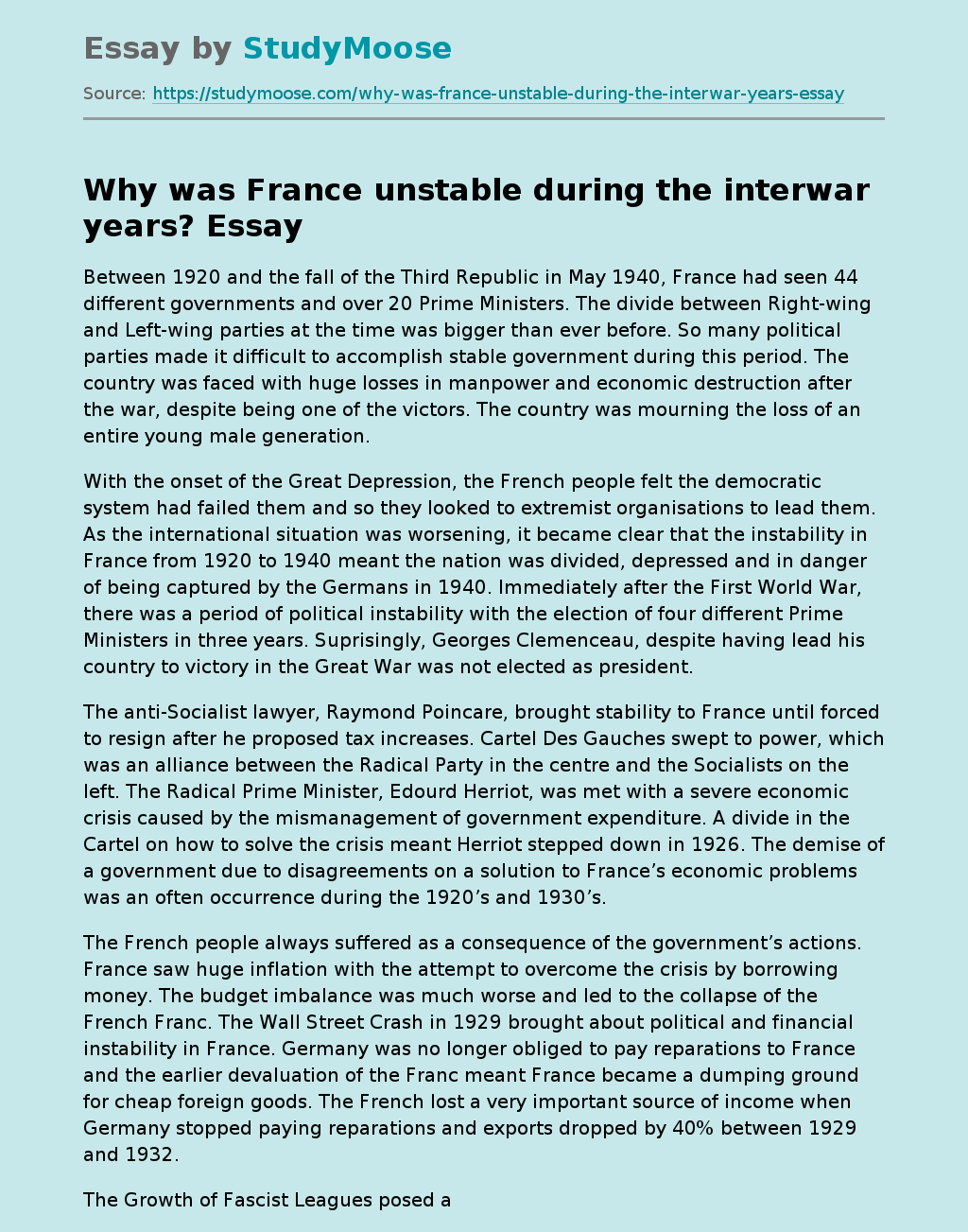