Do you know how big is Wal-Mart? Wal-Mart is the world’s largest retailer, which has approximately 3,900 stores in the U.S. and 1.6 million employees. In 1962, when Sam Walton opened the first Wal-Mart store in Rogers, Arkansas, no one could have ever predicted the enormous accomplishment this small-town merchant would have. The reasons why Wal-Mart is successful are because of its low price, convenience and role of monopoly in the industry. The first reason why Wal-Mart is so successful is because it offers low price for customer.

Turn in your highest-quality paper
Get a qualified writer to help you with
“ Why Wal-Mart successful? ”
Get high-quality paper
NEW! AI matching with writer

Experts estimate that Wal-Mart saves shoppers at least 15 percent on a typical cart of groceries. To keep the prices low, Wal-Mart required manufacturers to be more efficient and leaded these suppliers to move manufacturing jobs overseas especially to China. Besides, “Every day low prices” strategy helps Wal-Mart to build up a low-price image and the consumption habit from the shopper.

Therefore, many people become a loyal customer and shop more frequently in Wal-Mart instead of other grocery stores.

Minimizing the shopping difficulties and inconvenience is one of the reasons why Wal-Mart becomes successful. When we walk inside a Wal-Mart, we would feel comfortable because the positioning of items, the labeling of the isles and the discount sections are all arranged in a similar pattern in every store. Also, Wal-Mart provides customer with one-stop shopping environment, where you can buy a dozen eggs, a pair of sneaker, a 40-inch LCD monitor, and a photo print service. Moreover, most of the stores are open 24 hours a day.

It enables customer to shop anytime and get anything they wanted in Wal-Mart. That is why Wal-Mart is getting more and more popular and making a great profit.

Another reason is that Wal-Mart is a monopoly in the industry. Relying on discount retailing, the company has been growing steadily not only in the U.S. but also all over the world. Because of its massive size and buying power, it has driven smaller retailers out of business. Although there are multiple competitors, Wal-Mart sells over 3 times what number-two retailer Home Depot sells in an entire year and does more business than Target, Kmart, Sears, Kroger, J.C. Penney, and Safeway combined. Taking America as an example, the average of every family spent more than $4000 a year in Wal-Mart.

As a result, Wal-Mart is so competitive that no one can defeat its role of monopoly in the retail industry. To conclude, there are a number of reasons of being a successful company. To be the biggest retailer over the world, Wal-Mart is very competitive when pricing its products. It also provides convenient shopping environment to customers and be capable to lead the industry. That is why Wal-Mart is so successful and spread its business globally.

Why Wal-Mart successful?. (2016, May 07). Retrieved from https://studymoose.com/why-wal-mart-successful-essay 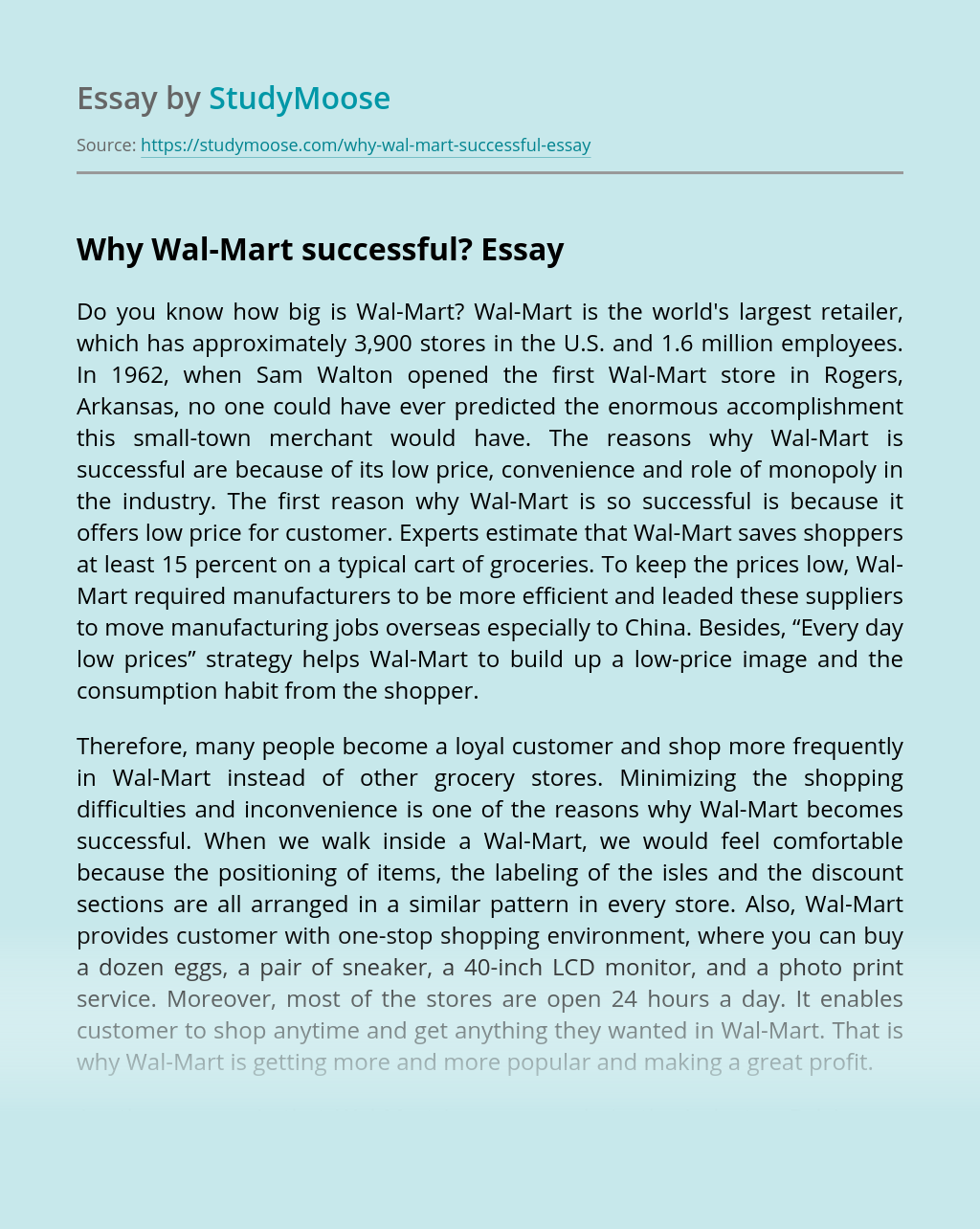 Turn in your highest-quality paper
Get a qualified writer to help you with
“ Why Wal-Mart successful? ”
Get high-quality paper
Helping students since 2015
Stay Safe, Stay Original