Why the Rich Are Getting Richer and the Poor, Poorer

Robert B. Reich, Why the Rich Are Getting Richer and the Poor, Poorer Reich starts his exordium with a distribution of where American workers found themselves in the early 1990’s in reference to where almost all American workers were just 20 years before. Reich placed most of the workers that contributed to the economy during the Nixon administration as being in one boat, analogous to the famous quote by G.K. Chesterton, “We are all in the same boat, in a stormy sea, and we owe each other a terrible loyalty.

Don't use plagiarized sources.
Get Your Custom Essay on Why the Rich Are Getting Richer and the Poor, Poorer Just from $13,9/Page

” Under Reich’s distribution you were still in a lifeboat, but the sea state and your future could be rough or smooth sailing depending upon your chosen profession. To which boat one found his or her self was directly related to how they fit in to requirements of changing corporations. The first boat was filled with what Reich defined as routine producers, when all Americans were in the same boat in the 1970’s, corporations that employed the largest percentage of workers were nationalistic and pyramid like organizations, but by the 1990’s the corporations had transformed themselves into multinational web-like structures that had no allegiance to any single country.

Their motive was to maximize profits for their shareholders by seeking the most advantageous arrangements to produce their products, or to streamline their operations.

Having established where individual workers found themselves in the early 90’s, Reich started a long argument of direction utilizing cause and effect to show how different segments of the American economy were affected by the changing requirements of these multinational corporations. Routine production jobs that were often large employers of unionized workers moved to where labor was cheaper, this directly affected the number of workers that belonged to unions and the number of supervisory personnel necessary for the smaller work force that remained in this country. The affect on American jobs was not only because of jobs being exported overseas, foreign corporations sought to reduce shipping coast by producing products in the United States, but they often would partner with American companies in need of capital to build new factories that utilized technology to reduce the number of workers to produce the same volume in old facilities, further eroding the need for routine producers. Technology was also a problem for occupants of the second boat; their fate was not as bad as those in the first boat, but still the boat sinking slowly. The second boat held in-person servers such as cashiers, banks tellers and car washers whose jobs are slowly being replaced by robots and other automated machines.

The reason their boat is sinking slower was that “in-person servers are more sheltered from the direct effects of global competition.” That doesn’t protect them from routine producers who are unable to find jobs making an attempt to board their boat and replacing them. Reich also uses a form and substance argument about occupants of the second boat, in that as demographics change as the decline in the birth rate after the baby boom would propagate through and generate opportunities for older in-person servers that would not otherwise be available to them, he then accurately predicts the situation current Americans find themselves, the increasing numbers of elderly people will create needs for care-giving in-person servers. Reich then comes to the third boat, Reich defines the occupants as symbolic analysts, and their boat is sailing smooth because of the demand the world has created for them.

Symbolic analysts have a high level of education and on the job experience, there however a hierarchy in this boat; those at the bottom are doing just slightly better than the in-person servers in the second boat, but those in the middle or higher are making large sums of money because they sell their knowledge to those who want to make a large amount of money “by moving large amounts of money.” These symbolic analysts are not dealing with low or middle class customers. Their customers consist of the elite. When America occupied only one boat, everyone was doing well. Executives in a nationalistic pyramid-like corporation could not lower the wages of low-level-production workers too much because if they did there would be “insufficient purchasing power in the economy.”

Also, their compensation was much more closely tied to that of the routine producers, but as the structure of corporations changed, the net effect of strategic leadership had more affect on the net-profits of the corporations and the compensation packages of upper management grew exponentially. Reich uses an allegory to express another reason why Americans are succeeding as symbolic analysts; it is an American cultural construct of always seeking to improve communications with each other that creates people of great skill at manipulating oral and visual symbols, artists, musicians, story tellers of all sorts that export American culture all over the world. Reich was correct is his analysis that as the third boat grew, so would the American economy become more service based.

Why the Rich Are Getting Richer and the Poor, Poorer. (2016, May 08). Retrieved from https://studymoose.com/why-the-rich-are-getting-richer-and-the-poor-poorer-essay 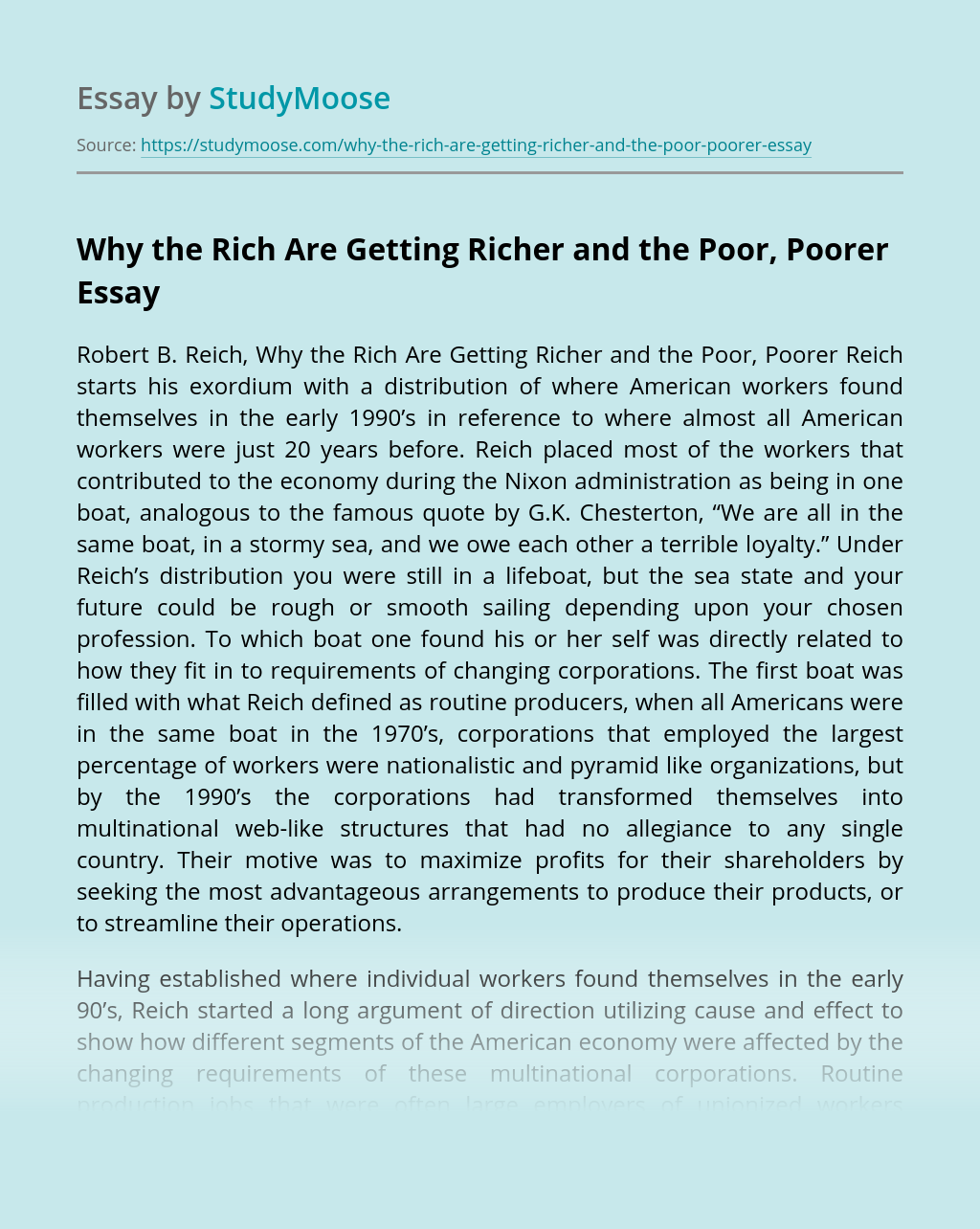 The group had been liable for 70% of Australian asbestos consumption. However, in February 2007, ASIC had started to impose civil proceedings against James Hardie, the directors and the officers, as ASIC alleged that JHIL and both executive and non-executive had breached their statutory duty. This short research report had outlined the role of ASIC...

Cisco Systems, Inc. is a global company that embodies the many characteristics of a company that values its employees as much as its clients. Cisco listens to their employees and responds to their needs. Cisco Systems has long been recognized as being one of the top 25 best places to work in America because of...

The Jextra Neighborhood case study is an evidence of the growing effort by Multi National Corporations to extend their operational base to take advantage of the increasing benefits associated with globalization. The case highlights the managerial capabilities and style of the Manager, Tom Chong; the cultural variations in the perception of business as an entity...

There are two company classifications, proprietary and public. Most Australian companies are proprietary limited companies because this classification and type suits the needs of most businesses. (i) Reasons to Choose a Proprietary Company A proprietary company by comparison to a public company has simpler and therefore lower cost reporting obligations, is limited to 50 non...

Summary: the mortgage mess happened in 2008 when there was a decreased homing price. However, their mortgage payment by homeowners were soon greater than the price of house. As a result, they forced the repurchase policy of many mortgage agreements, and let the subprime lenders to take over their houses. Subprime lender like New Century...