Why Students of the School of Pharmacy Shift to Another Course?

Pharmacy is a course concentrating on drugs and patient care. With rapid advances being made in medicine, it is necessary for pharmacy students to encounter more pressure in studying and to be life-long learners after graduating from pharmacy school.

Motivation is a psychological concept that refers to a person’s willingness to put effort in order to achieve educational goals and it is necessary in being sure of what you want. But there are cases that student’s motivation is degraded because they don’t want what they’re doing or taking up.

Don't use plagiarized sources. Get your custom essay on
“ Why Students of the School of Pharmacy Shift to Another Course? ”
Get custom paper
NEW! smart matching with writer

There are maybe factors or reasons why students choose their course they didn’t want it at first but with this factors and reasons it may lead to the confusion of students during the period of that course and decides to shift. If you have decided to change because you don’t enjoy your current course, then you should be absolutely certain that you’ll enjoy the course you’re moving to.

You should also be aware that changing course has significant negative consequences, you have to be certain that the change is worth it.

Our aim is to know the different factors that affect the decision making of the students why they shift course after a year or two in pharmacy school. The researchers have chosen this study to know the reason why there are students shifting to other course in their early years or their later years. The researchers wanted to know what are the reasons as to why there are students, even though they know that is hard, still keep on going.

Maybe the researchers might be able to postulate a better course outline that the students might be comfortable with.

With this in mind, the researchers decided to create a survey so they can gather and come up with insight applicable to the students of Centro Escolar University Manila, School of Pharmacy.

Setting of the study

This study was conducted in Centro Escolar University Manila where it was established on June 3, 1907 by Doña Librada Avelino and Doña Carmen de Luna for the instruction and training of the youth in all branches of the arts and sciences. With some branches, a single blackboard and a few book, two educators steadfastly nurtured a dream of establishing a nationalistic center of learning for Filipino women. The first college that is Pharmacy, opened in 1921, the College of Liberal Arts, Education and Dentistry followed one after the other. Three years later, the College of Optometry was established.

Centro Escolar University was founded in 1907 by Doña Librada Avelino, then a young woman of 24, together with Doña Carmen de Luna, a close friend and associate, and Fernando Salas, a lawyer friend, who gave Doña Ada encouragement and financial support.

Originally and fittingly called Centro Escolar de Señoritas, the institution offered an education program whose set-up and guiding philosophy are provided in Article IV of the by-laws governing the college:

The purpose for which the corporation is constituted is the opening of primary, intermediate and secondary classes, and later on the collegiate departments, and the teaching of the subjects which refer to physical, intellectual, moral and civic training of the individual.

The constitution and the by-laws of the Centro Escolar de Señoritas was approved on June 10, 1910, three years after its establishment. The educational philosophy of the founder is reflected in the academic and civic training she and her colleagues gave the students. Their participation in civic public events had always been one of the typical characteristics of the pedagogy of Doña Ada. It was her aim to bring out the Filipino woman from her femininity and respect for valued tradition.

Doña Ada practically shouldered the entire responsibility for the successful administration of the school from the date of its founding to her death on November 9, 1934. (She was succeeded by Doña Carmen, who continued the work left by her co-founder until the former’s death on November 4, 1962. From 1962 to her death on December 10, 1973, Mrs. Pilar Hidalgo Lim, educator and civic leader, was president of the University. Mrs. Lim’s administration was characterized by expansion in enrollment and infrastructure development).

During the early stage, Doña Ada was assisted by her co-founder, Doña Carmen, who was sub-directress and dean of discipline; by Margarita Oliva, Doña Ada’s cousin, who served as administrator; by Maria Francisco, (later to become Mrs. Villaceran), first Filipino woman-lawyer, who was the first secretary of the Centro Escolar University; and by Felisa B. Francisco, who served as the first treasurer of the Centro Escolar de Señoritas.

Later, two of the stalwarts joined the pioneer. Miss Generosa de Leon, an AB graduate of CEU (1910), served as Registrar and Treasurer from 1921 up to her death on October 11, 1962. Conception A. Aguila joined the Centro Escolar de Señoritas as kindergarten teacher in 1921, then served subsequently as high school teacher, college instructor, principal and supervisor. At the time of her death on September 6, 1959, Dr. Aguila was legal and educational consultant, executive director and dean of the Graduate School.

The Centro Escolar University has now a kindergarten school, an elementary school, a high school, 12 colleges and a graduate school.

The years of their founding are as follows:

The Centro Escolar University has grown from 123 students in 1907 to the present close to 18,000 on all levels in three campuses. A number of changes have taken place since its founding in order to meet the demands of the fast changing society. In all of these changes, however, the administrators have always been guided by the Founder’s philosophy of moderate modernism and progressive Filipinism captured in the motto: ciencia y virtud.

It has also a branch in Tambo, Parañaque, Rizal. Founded in 1954 as Baclaran High School, the CEY branch is now named Generosa de Leon Memorial School in memory of the late “Maestra Osang”, former registrar and treasurer of Centro Escolar University. Another branch was opened in Malolos, Bulacan in 1978 in response to the national call to decongest Metro Manila.

The fourth president of the Centro Escolar University and its first male president is Mr. Dionisio C. Tiongco. In his inaugural address on May 4, 1974, President Tiongco committed the University to a greater invovlment in the national’s affair. He spoke of two general directions to achieve this goal; first to enable the University to do a better job as an institution of learning, he wholeheartedly supported the idea of consortiums. Second, he encourage the search for innovations which are responsive to the needs of the times. As a result, Centro Escolar University has started to offer non-degree work-oriented and technical courses in order to respond to a specific need. He further pledged to continue the pursuit of excellence in the standards of instruction and research of the University.

The understanding and appreciation of Philippine life and culture has always been the underlying motivation behind most of the University research projects and cultural presentations. In depth studies of Filipino culture groups and of basic rural communities abound in the University research literature. The outstanding University publications treat of the Filipino family in its rural and urban orientation and of the food culture of the Filipinos. Recently completed in an NSDB-sponsored research on the Filipino adolescents in the rural and urban setting.

The credit of pioneering in the presentation of opera in Filipino goes to CEU. Over the years, some of the University opera presentations are original works like Hinilawod, Mariang Makiling, Princesa Urduha, and Pilipino translation of the classic opera pieces like Aida, Carmen, Mignon, Lucia at Lammermoor, Tales of Hoffman, Merry Wives of Windsor, La Traviata, Rigoletto and Un Ballo in Mashera.

JOURNALS AND MAGAZINES
Hastings, Jan K., et. al. “Pharmacy Students Motivation”, American Journal of Pharmaceutical Education, vol.65 (Fall 2001)
ELECTRONIC SOURCES
How Hard is Pharmacy from http://www.pharmdprograms.orglis-pharmacy-school-hard/
What it Takes To Get A Pharmacy Degree from
http://www.life123.com/career-money/careers/pharmacy/pharmacy-degrees.shtml
What To Consider Before Becoming A Pharmacist from http://www.life123.com/carrer-money/careers/pharmacy/becoming-a-pharmacist.shtml
Five Things to Consider Before Shifting Courses from http://www.ormahighlights.com/2012/07/five-things-to-consider-before-shifting-course/
Shifting College Course from http://www.sharedreviews.com/article/shifting-college-courses
Changing Course at University from http://www.studentroom.co.uk/wiki/changing-course
Why Do Students Shift Course from http://www.mylot.com/w/discusion/1601353.aspx
Impact Of A Gender Shift On A Profession from http://www.forumpublicpolicy.com/archive07/gardner.pharmacy.pdf
Significance of the study
The study will answer administrator, teachers in School of Pharmacy as to why pharmacy students choose to shift rather than finish the course. We will know the subjects that make students decide to shift. Knowledge of this will greatly help them be responsible to adopt earlier to decrease failing grades in the subject, thereby reducing the shifters of pharmacy. If we will know the reason why students of pharmacy shift, we might be able to make a course outline to prevent the shifting of pharmacy student.

Why Students of the School of Pharmacy Shift to Another Course?. (2016, Dec 19). Retrieved from https://studymoose.com/why-students-of-the-school-of-pharmacy-shift-to-another-course-essay 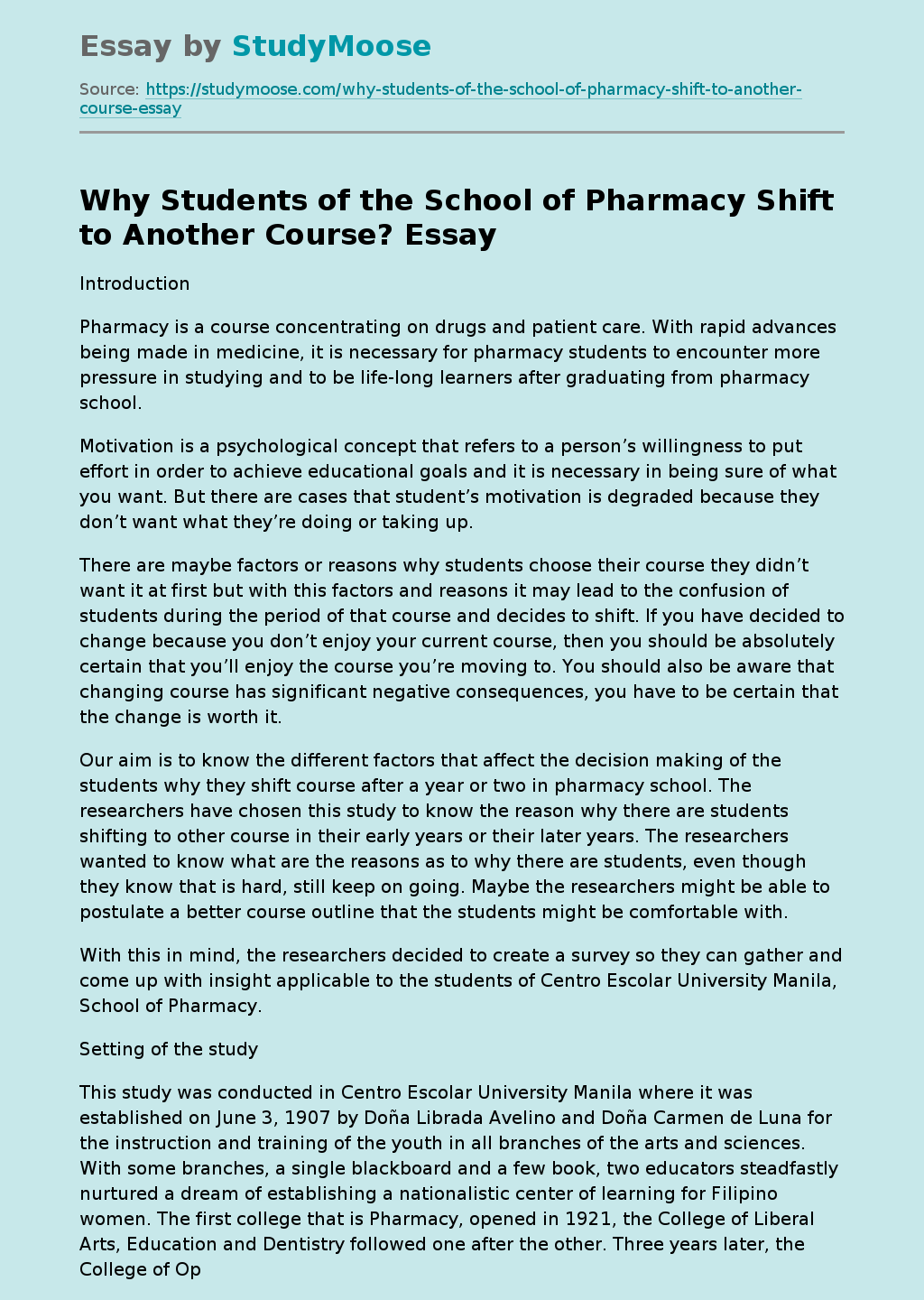