Why People Exercise and Why They Don't?

In this assignment we will be looking at why people exercise and why they don’t. This assignment will also include what barriers there are to exercise and determinants of exercise adherence they include; personal, demographic, environmental and cognitive. We will also look at behavioural change models they are; transtheoretical model — Prochaska and Di Clemente; health belief model, theory of planned behaviour.

People exercise for many reasons. For example, someone who is severely overweight may exercise to improve their health by shedding pounds.

Don't use plagiarized sources. Get your custom essay on
“ Why People Exercise and Why They Don’t? ”
Get custom paper
NEW! smart matching with writer

Others may exercise for appearance reasons, such as gaining a certain muscle tone. Some may exercise just to stay healthy as part of a dual role with diet. Still others may exercise out of necessity to help fight off or control diseases such as diabetes or heart disease. Exercise also causes noticeable effects on the heart. When you exercise your muscles, whether through strength training or aerobic exercise, you also exercise your heart, a muscle.

Exercise strengthens the heart, allowing it to pump the blood through the body easier; this reduces the blood pressure within the blood vessels. Other than the physical effects of exercise there are psychological effects. One of the most significant areas where this connection has been studied is the effects of exercise on anxiety and depression. When you exercise, your body produces feel-good chemicals called endorphins, which can naturally help treat contributing factors to depression and anxiety

Candidate
What exercise did you do?
Why do you do it?
Candidate 1
Rugby, gym and fitness coaching
To lose weight, improve fitness and have good health
Candidate 2
Cycling, football and walking
They enjoy it and improve and maintain fitness
Candidate 3
Cardiovascular fitness
To lose weight
Candidate 4
Gym and rugby
Increase muscle mass

People do not exercise because they have a poor diet, they may eat the wrong things like too much fatty foods and sugary drinks, if they make a change to their diet for example have more fibre, fruit, vegetables and have more healthy protein in their diet they will find that they will become more energised and alert. Another reason why people don’t exercise is because of their current physical condition, they could be obese maybe they think they are too old to exercise; before any exercise can happen people who think they cannot exercise must consult a doctor to make sure it is okay. Almost anyone can perform some sort of physical activity regardless of size, age and gender. Getting a lack of results can be used as an excuse to not do exercise, when you don’t see the results that you want to people become less motivated and disheartened. Exercise changes the inside of your body as well and the outside, it can reduce blood pressure, increase muscular strength and endurance and can help protect some chronic diseases.

People create their own barriers to exercise for example ‘I don’t have enough time’, ‘exercise is boring’ and ‘I don’t know how to be active’. There are ways of getting past these barriers. ‘I don’t have enough time’; throughout the day keep a diary of what you do for one week, at the end of the week look at the diary and see how much free time you actually have. Don’t exercise for long periods of time cut them down it blocks so you can do little but often, 15 minutes a day. During your day think of ways to incorporate exercise into your lift, you could get off the bus one stop before and then walk the rest of the way or take the stairs instead of the lift.

‘Exercise is boring’; if you find exercise is boring do it with a friend to keep you company therefor you have someone to motivate you and you can enjoy a walk. Join a team sport is an option for example you can join your local football team and have something to work at this will also keep you motivated. ‘I don’t know how to be active’; every town or city has a gym you can sign up and use it, you can go for a walk around where you live. If you enjoy watching sport on television then why not give it a go for real, if you like rugby then join a local team that way you can make new friends and enjoy the competitiveness of sport.

Personal determines of exercise adherence are what type of personality you are, there are two different types of personality; type A and type B which we looked at in the personality assignment. Type A. this type of personality tends to be very competitive and critical of themselves, they create goals and strive towards them and get a sensation of joy when they reach their own target. Type A individuals tend to be short tempered and overreacting, they also tend to have high blood pressure. People who are type a pe3rsonallitys might not take part in sport because they have high blood pressure and may not be allowed by the doctor to take part in physical activity.

Demographic determines of exercise adherence traditionally have had a strong link with physical activity. For example, education and income have all been positively related to physical activity. Specifically, people will higher incomes, more education, and higher occupational statuses are more likely to be physically active.

The environment in which we exercise can affect exercise adherence. It is sometimes the case that the weather can be too poor for someone to exercise; this is relevant to exercises like running cycling or outdoor sports. The weather can affect your health in unsuitable weather conditions for example when it is cold you may become ill and catch a cold. People with allergies may not be able to exercise outdoors because of pollen levels. When exercising the weather should be taking into account when deciding what exercise program is suitable for you and the weather. It may be easier to exercise in a local sports centre or a gym because the climate is controlled and the weather does not influence your exercise. By being able to maintain a regular exercise routine, regardless of the weather you can ensure that you have high exercise adherence.

An important component of Bandura’s social cognitive theory of behaviour is the concept of self-efficacy. Self-efficacy is an individual’s confidence in his or her ability to perform a given task and is the product of both individual’s perception of his or her ability to achieve a specific level of performance and an individual’s evaluation of the probable consequences of a specific behaviour. Efficacy expectations are derived from four different sources: performance mastery, vicarious experience, verbal persuasion, and physiological states.

Although interventions designed to improve performance mastery generally are the most effective means of building patient self-efficacy, healthcare professionals also can develop strategies specific to the other sources of efficacy expectations. Similarly, self-regulatory skills become increasingly important for long-term exercise maintenance and can be enhanced in several ways.

People will not change their health behaviours unless they believe that they are at risk. For example an individual will not quit smoking because they have not had any problems or been critically ill.

The probability that a person will change their health behaviours to avoid a consequence depends on how serious the individual considers the consequence to be. An example of this would be an individual who is obese not exercising because they think they will not have a heart attack or stroke and they will keep eating fatty foods and not reduce the risks of heart attacks. Perceived Benefits

It’s difficult to convince people to change behaviour if there isn’t something in it for them. An example of this would be when an individual who needs to exercise but doesn’t want to because there is not a reward that they will want when they are done.

Cues to action are external events that prompt a desire to make a health change. A cue to action is something that helps move someone from wanting to make a health change to actually making the change. For example someone goes to the doctor and the doctor tells them they need to exercise or you’ll be at a high risk of heart attacks and possibly death so that will prompt the individual to change their behaviour.

People in the Precontemplation stage do not intend to take action in the future, usually measured as the next six months. Being uninformed or under informed about the consequences of one’s behaviour may cause individuals to be in the Precontemplation stage. Multiple unsuccessful attempts at change can lead to deflation about the ability to change. Both the uninformed and under informed tend to avoid reading, talking, or thinking about their high-risk behaviours.

Contemplation is the stage in which people intend to change in the next six months. They are more aware of the pros of changing, but are also very aware of the cons. Individuals in the Contemplation stage are not ready for traditional action-oriented programs that expect participants to act immediately.

Preparation is the stage in which people intend to take action in the immediate future, usually measured as the next month. Typically, they have already taken some significant action in the past year. These individuals have a plan of action, such as joining a health education class, consulting a counsellor, talking to their physician, buying a self-help book.

Action is the stage in which people have made specific modifications in their lifestyles within the past six months. Because action is observable and recordable, the overall process of behaviour change often has been connected with action.

Maintenance is the stage in which people have made specific modifications in their lifestyles and are working to prevent reversion however, they do not apply change processes as frequently as do people in Action. While in the Maintenance stage, people are less tempted to revert back to how they were and grow increasingly more confident that they can continue their changes.

The theory of planned behaviour

The theory of planned behaviour emphasizes behavioural intentions as the outcome of a combination of several beliefs. Intentions – ‘plans of action in pursuit of behavioural goals’ (Ajzen and Madden 1986) Povey et al (2000) studied the intentions of people to eat five portions of fruit and vegetables per day or to follow a low-fat diet. The theory of planned behaviour was good at predicting intentions but not behaviour. Self-efficacy was found to be a better predictor of behaviour. http://books.google.co.uk/

Show above is a basic diagram of the theory of planned behaviour, it shows that stages that an individual will go through before they behave a certain way and takes into account the environmental factors and the social pressures. The theory of planned behaviour has been very useful when predicting exercise behaviour, seen in a study by Mummery and Wankle (1999). The study found that swimmers who had a positive attitude towards training, believed that significant others wanted to train them hard and help positive perceptions of their swimming ability, this formed stronger intentions to train and actually adhered to the training program a lot more than those who did not hold these attitudes and perceptions.

Why People Exercise and Why They Don't?. (2016, Aug 26). Retrieved from https://studymoose.com/why-people-exercise-and-why-they-dont-essay 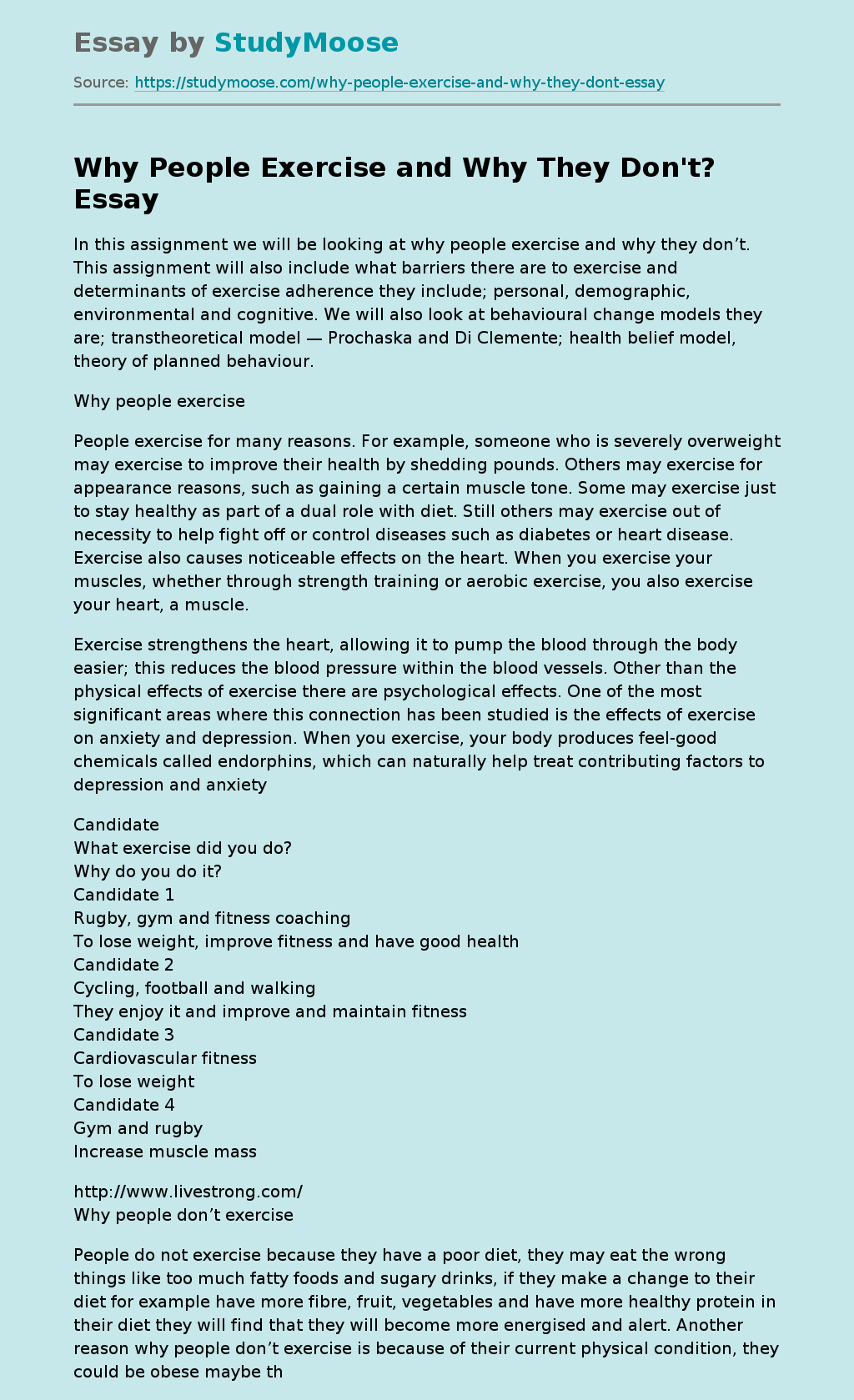