Why nuclear weapons should be banned

BOOM! That’s the sound of a nuclear bomb going exploding, and a split second after a person hears that sound he most likely will be turned into a bed of ashes by the wall of fire that’s coming towards him at 100 mph. If he’s not burnt to a crisp by this great wall of fire, he will be killed by the nuclear fallout that will eat him alive starting from the inside and working its way out. There are many other nuclear weapons besides the atom bomb that kill, for example mustard gas.

Mustard gas was used in the Desert Shield/Storm war on us by Sadaam Hussain and his men. This is the main reason why all of our men that were in the war in Saudi Arabia are now having medical problems. This is one of the three main causes nuclear weapons should be banned, not to mention the amount of money they cost, and the space they take up.

The main reason nuclear weapons should be banned is the simple fact that they kill or severely injure. The most remembered use of a nuclear weapon was during World War 2, when we, the U.S., used the bomb on Nagasaki and Hiroshima killing millions and destroying everything in those cities. Not everyone died at once, some people died instantly while others died a slow, agonizing, painful death. The painful death was caused by fallout, which is a radioactive chemical used in making the bomb.

The chemical is usually radium or plutonium, and is very deadly when inhaled.

The stuff is spread everywhere when the bomb explodes, and then falls to the earth as light dust. If a person intakes a small amount they have a chance at living, but with severe health problems for the rest of their life. Large amounts will eat away the insides of a human, and eventually kill him. The related health problems could be anywhere from heart, lung, or kidney problems, etc. These health problems will lead to an earlier death than normal, but will also lead to medical bills beyond belief.

The next major setback is the cost. A nuclear weapon takes around 1 million dollars to make. Then there are tons and tons of them made costing us more and more, while we as a nation are in the trillions of dollars in debt. Now after you make the weapon you need a silo or some type of area to keep it which costs more money. After the constructors find a place to store the weapon, they need some guards to guard it so none of those Libyan terrorists steal it. Guess what, that takes more money.

Through the whole process the government has to pay the people working to build the weapon, and add a little more to that so they keep it Top Secret and don’t go tell the Russians our secrets. All this money the government puts out to make these weapons could be put to other uses. Just a shot in the dark, but if they stopped making weapons all together and concentrated all that money on the National Debt, we could probably pay it off in a matter of 20 years.

The final cause would be the space they take up. The smallest of the nuclear weapons would be an Atomic Bomb, because it’s only the size of a normal room. Although we have those surface to air missiles and scud missiles that are three to four stories tall. Those missiles need silos to store them, and there are around 20,000 in existence today. Then what about all those top secret projects that the common people don’t know about yet. There could be hundreds of new types of weapons not even made, but designed on a piece of paper sitting on the desk of some scientist in Washington now. Besides the physical space weapons take, they also take up space that medical scientists could be using to design a cure for AIDS or Cancer.

It’s also taking a way space that the U.S. could use as a jail or correctional center, because the ones we do have are overcrowded as it is now. Most of all we as a nation should be worried about ourselves over some third world country, because if we don’t we might become one of those third world countries. With crimes, murders, and terrorist attacks within our own country on the rise, what’s going to stop some big country like China or Germany attack at our most vulnerable moment. These are only a few reasons nuclear weapons should be banned, many more can be listed, but what’s the use aren’t these bad enough already.

Why nuclear weapons should be banned. (2016, Jun 18). Retrieved from http://studymoose.com/why-nuclear-weapons-should-be-banned-essay 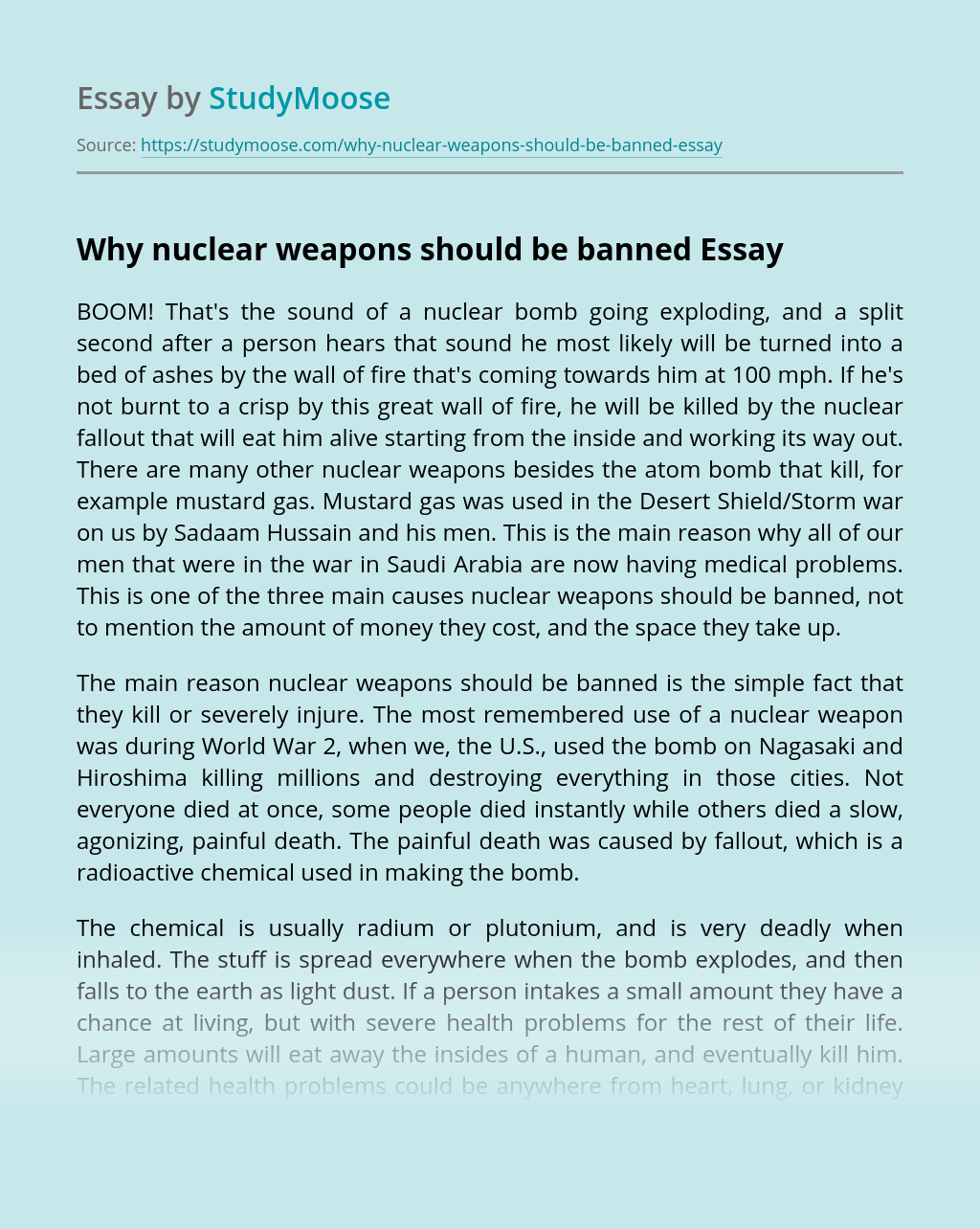 Don’t waste time
Get a verified writer to help you with Why nuclear weapons should be banned
Hire verified writer
$35.80 for a 2-page paper
Stay Safe, Stay Original