Why Kayerts Killed Himself, an Outpost of Progress Essay

There are a number of reasons Kayerts hangs himself at the end of the story. Previously, he shoots Carlier mistakenly after they have been arguing about the sugar. Kayerts feels lethal ill (p. 33, l. 64) shortly after killing his assistant and only pal at the trading station. Afterwards, Makola appears and talks with Kayerts. Makola gets to the conclusion that Carlier “died of fever” (p. 34, l. 21) and Kayerts simply stays silent. Kayerts might have killed himself due to the fact that he feels alone, which ends up being most apparent on page 34, ll.

Don't use plagiarized sources.
Get Your Custom Essay on Why Kayerts Killed Himself, an Outpost of Progress Just from $13,9/Page

His only ‘friend’ he might talk to is dead. Furthermore, he shot an unarmed partner and might be afraid of being apprehended. (which is not in the text …) He lost his buddy and partner and can’t continue life without him. Besides, he feels guilty because he accepted the selling of the slaves, which is– naturally– forbidden. (p. 25, ll. 55-64) This might be one factor, why Kayerts didn’t see another possibility to get rid of all his issues than hanging himself.

Another substantial point is his daughter Melie.

He cannot come across Melie because he would disappoint her by his own failure. Furthermore, Kayerts seems to understand that colonialism is all about exploitation (p. 36, ll. 3-7; p. 34, ll. 37-2) Makola had said that “Carlier died of fever”, which was a lie. Kayerts does not want to lie. He cannot live with this lie because of his bad conscience. This despair can be found on page 34 ll. 28-36 and p. 35 l. 64 when he prays to god. From these lines we can infer that Kayerts thinks about human life, which has no sense for him (p. 34 ll. 0/31) At the very end of the story, the steamer is arriving at the station.

Kayerts is probably nervous and afraid of his director because Kayerts and Carlier failed. He has possibly no choice and does not see a point in living. As far as I am concerned, all those reasons are brought into contact and explain why he hangs himself. There is not only one reason for committing suicide. Of course, there are more important and less important factors, but all these lead to his suicide. To my mind the main point is that Kayerts has nobody who helps him to get out of this situation.

Why Kayerts Killed Himself, an Outpost of Progress. (2017, Jan 24). Retrieved from https://studymoose.com/why-kayerts-killed-himself-an-outpost-of-progress-essay 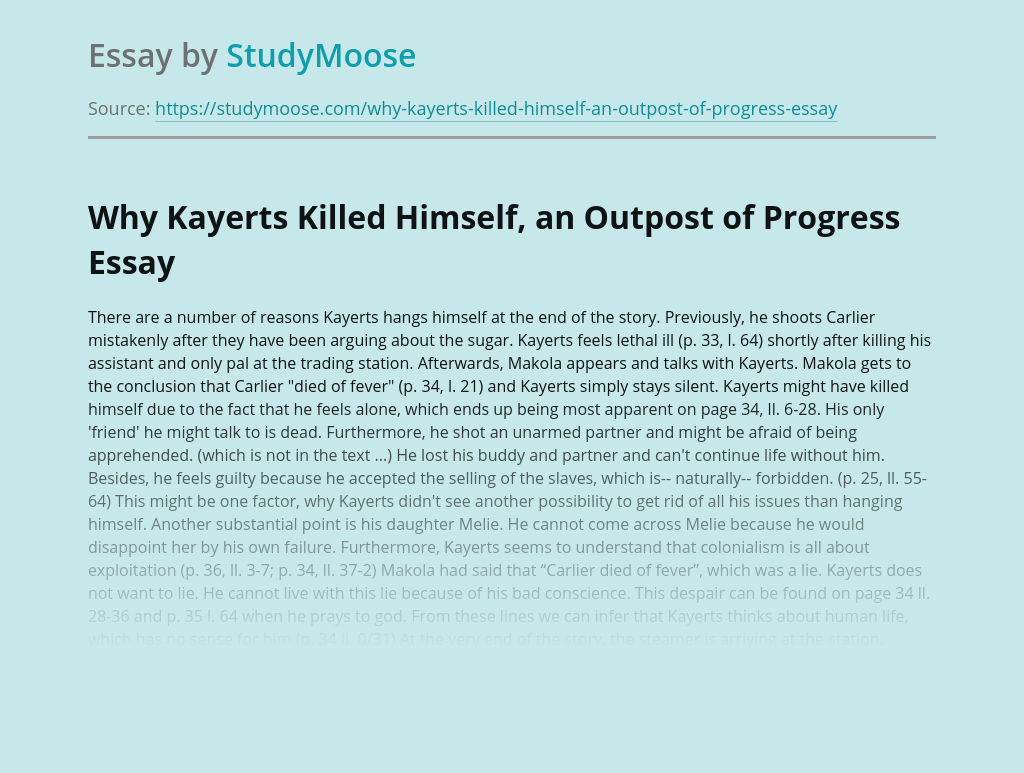 "The Things They Carried" by Tim O'Brien

Rationale The intention of the following text is to elaborate the use of meta-fiction and narrative layering in Tim OʼBrienʼs The Things They Carried through writing a narrated interview with Tim OʼBrien regarding Part Fourʼs study: Literature and Critical Study. Using quotations/transcriptions of Tim OʼBrienʼs statements within the fictional interview will support the structure of... VIEW ESSAY

Beowulf and Achilles are different in many ways; one of which is their character. Beowulf is a great warrior and leader who fought to protect his soldiers and to make places more peaceful. He also perfectly embodies the values of loyalty, pride, and courtesy. Achilles, on the other hand, is not as heroic as Beowulf,... VIEW ESSAY

Being different is not always bad. It can as well mean to be capable of doing something others wouldn’t have done, to have a dream of becoming something that extends beyond your social environment. But it can be a complicated road to achieving this dream and you can meet different obstacles that need to be... VIEW ESSAY

View sample
Post Colonial Perception on the Grass Is Singing

The Grass Is Singing, first published in 1950, was an international success. The story focuses on Mary Turner, the wife of a farmer, who is found murdered on the porch of her home. After her body is found, we are taken back to her younger days and slowly discover what happened to her. The background,... VIEW ESSAY

The play ‘A Midsummer Night’s Dream’ is complex on various levels. Comedy is a key level of complexity. I would focus on comedy associated with slapstick, this would aid in the development of my key dramatic intention of a victim theme. Examples of this theme can be found throughout the play but I am going... VIEW ESSAY