Why it is important that people study business ethic

The recent rash of ethical misconduct in the new millennium has created public mistrust and has become a major concern in the business arena. For example, accounting scandal, insider trading, falsification of documents, false advertisement, bribery, just to name a few, are significant indicators of the state of ethical behavior. Ethical misconduct does not exist in the business world alone. Government politician are part of corrupt picture also. Just imagine being part of the highest organization on American soil, and the symbol “in God we trust” as the symbolic motto, but those are just marketing statement for some politicians to collect votes.

Turn in your highest-quality paper
Get a qualified writer to help you with
“ Why it is important that people study business ethic ”
Get high-quality paper
NEW! AI matching with writer

For example, congressman Traficant, accepted bribes as a House of Representatives member: he was ultimately booted out of Congress and sent jail. Scientist have come under fire recently, the so called ‘person of humanity’, has been accused of falsifying and misrepresenting research data that could repute later research base erroneous data, which would create mistrust in future scientific research, but it also promote scientist own self interest be it greed or personal status.

In theory, according to the authors (Ferrell, Fraedrich, Ferrell 2005), studying business ethics will help you begin to identify ethical issues when they arise, recognize the approaches available for resolving issues, ethical decision making process, and promoting ethical behavior in an organization. Additionally, you will also begin to understand the coping skills required when the conflict is between personal values versus the values of the organization. Thus, the study of ethic is related to issues of “what is right and what is wrong”.

These are determined by ones values. Our sense of right and wrong, and or what is proper or improper, has its base in the values that we uphold and cherish. We may not be aware of the values that shape and guide our actions.

These values are learned, not taught. Values are instilled during childhood from a variety of contacts one has with family, educational institutions, people, stories, and situations that reflect values. Our values are the guiding principles that determine ones evaluation of what is wrong and right. Values constitute the foundation of one’s discipline and ethical conduct. They are deeply rooted, fundamental beliefs. Indeed, our own personal values alone are not enough when dealing with the complexities of business making ethical decisions. (Ferrell, Fraedrich, Ferrell, 2005). Once aging, studying business ethic is essential in not only enhancing one’s own beliefs system, but also bring awareness to management as to the ethical behavior and decision making of its leaders and organization. It guides management in maintaining organizational standards and building a healthy organizational culture.

Business ethic is about ensuring acceptable standards of behavior throughout all operations of a business. It involves complying with company, legal, professional and regulatory standards, and abiding by principles such as: fairness, honesty, respect and truth. It guides the understanding of what is right or wrong in the workplace. The continuing focus of business ethic provides direction to managers when they are struggling in times of crises and confusion, ensuring they are adhering to ethical standards.

Failure in business ethics is a threat to the future of every corporation. Business ethics is an issue that is a thousand times more powerful than the Internet or globalization and can destroy a business very quickly. To make matters worse, the standard in which a corporation is judged on is changing swiftly. These responses are in direct relation to questionable accounting practices by firms, which allow CEO’s to steal enormous amounts of organizational financial resources for example: Tyco, CEO (Kozlowski) misappropriated 170 millions, other organization involved in questionable accounting schemes by top leaders were: Halliburton, WorldCom, Global Crossing, Synegy, Qwest, and Sunbeam. (Ferrell, Fraedrich, Ferrell, 2005).

The corporate leaders represent individuals that thought they were above the rules of business and laws of the land; they stole from both the rich and poor. Thus, accounting scandals are just one ethical concern we must emphatically address in the business world. Corporation reeducation and instill in all its members on ethics and how to behave in an ethical manner, and the consequence for unethical behavior. Though studying business ethic is a great learning tool, but can we say it will ultimately change the unethical behavior? It doesn’t take a “rocket scientist” to note that you cannot change a person behavior by education alone, you must also have a willing participant that believe and live by ethical values.

In my opinion, we should have emphasized the rules and laws that govern ethical business practices with the collapse of the saving and loan industry in the 80’s, which cost over $500 billion, and were outright unethical practices. These people are supposed to be of respectability and of high social status inside and outside of a corporation, but greed and self-serving interest clouded their ability to make ethical decisions. In laymen terms, business ethics for many years was treated as just a ” conversation piece”. There is, however, a direct link between business ethic, values, and “white collar crime”, for example, this type of crime cost more money and more lives than all other types put together. In other words, major corporations in the past have be given a lot of leniency in most situation. This could lead one to think that behavior of this type (unethical) was condoned by our government. Even though corporate laws are written in the interest of corporate offenders instead of the public.

These corporate giants sometime wheel great amounts of economic and political power, that also have enable corporate criminals of the past to escape real prosecutions for not behaving ethically. For example: during my own career a military service member, it was mandatory that Officers and Non – commission Officers, attend a forty – hour course in professional army ethic training semi annually. The ethic teaching that I received set the moral context for service to the nation and preserve the nation.

The four professional army ethic (loyalty, duty, selfless service and integrity), contained the values (courage, integrity, honor, service, respect, duty, and loyalty), which govern and guide us in the way military leaders must lead at all times. (Ferrell, Fredric, Ferrell, 2005), point out studying business ethic is valuable for various reasons. It plays a major role in the evaluation of business decisions. But their must a clear understanding of the application of the rules and principles as they apply in business. It gives sight to cause and effect of unethical behavior. It teaches that having the right belief and values, is important factor in ethical decision making.

In today’s commercial environment, business ethic I feel should be at forefront of reconciliation for business managers, due to unethical behavior of so many. Thus, for companies to return to the good grace of the public perception, CEO’s must make a total commitment to training and education on
ethic to enhance their moral development statistics. Additionally, managers should learn to “walk the walk and talk the talk”, meaning, they should communicate ethical standards and enforce standards, by insuring every member receive ethic training, follow up concurrent teaching within the organization, and hold everyone accountable for their unethical behavior. Success is much more than profit margin, it is the image that is portrayed by business, which in need of serious surgical procedures.

Why it is important that people study business ethic. (2016, Jul 24). Retrieved from https://studymoose.com/why-it-is-important-that-people-study-business-ethic-essay 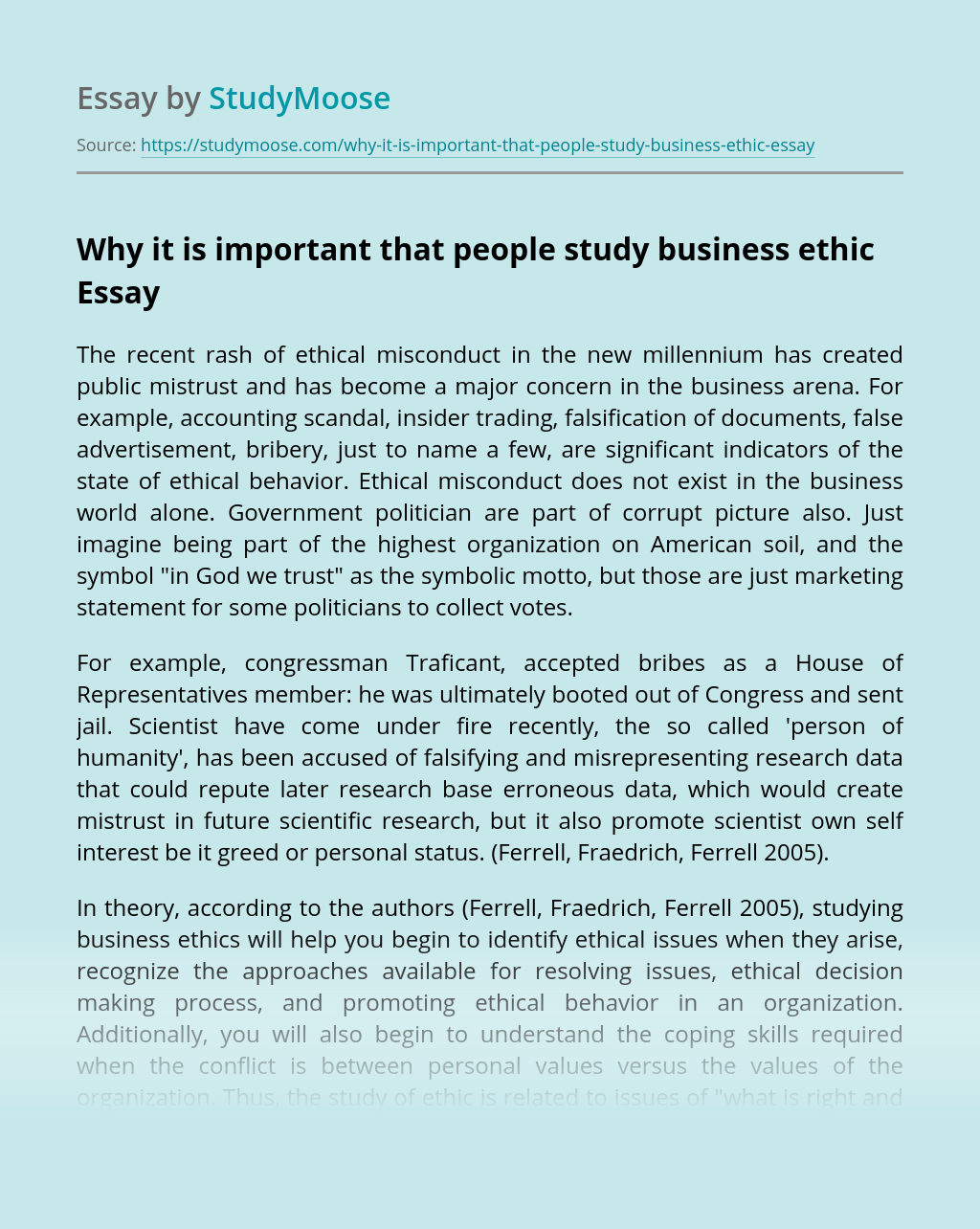 Turn in your highest-quality paper
Get a qualified writer to help you with
“ Why it is important that people study business ethic ”
Get high-quality paper
Helping students since 2015
Stay Safe, Stay Original