Why is the Novel Titled "The Alchemist"?

Paulo Coelho dreamed to become a writer but it took him a little while to pursue his dream. This led him to write The Alchemist, which is similar to the journey he had to go through to successfully publish his book. The Alchemist is one of the bestselling books in the world which delighted many readers. It tells a story about a boy named Santiago in his journey of finding the treasure in the Egyptian pyramids. The novel is titled The Alchemist because of the following reasons: the journey which Santiago-the main character goes through is similar to how an alchemist transforms lead to gold, Santiago’s journey to find the treasure mirrors the journey an alchemist makes to achieve the Master Work, and Santiago became an alchemist.

Don't use plagiarized sources. Get your custom essay on
“ Why is the Novel Titled “The Alchemist”? ”
Get custom paper
NEW! smart matching with writer

The novel is titled The Alchemist because the journey which Santiago-the main character goes through is similar to how an alchemist transforms lead to gold. In the beginning, Santiago hesitated and kept making excuses to not believe in his Personal Legend.

However, during Santiago’s experience with his journey, he learned to understand the Soul of the World and realized his Personal Legend (Coelho 79).

The process of transformation requires self-realization and personal efforts. Santiago had been reluctant for a long time before he was actually engaged in his journey, which brought a lot of lessons to himself. Self-understanding changed the characteristics of a person like Santiago and then brought “the gold” outside to the world. Santiago says that “that’s what alchemists do.

They show that, when we strive to become better than we are, everything around us becomes better, too” (Coelho 143). At the beginning of the novel, Santiago satisfied with the simple things he has as a shepherd. However, he still gave a try on his dream even though he didn’t know what will happen and what it will lead to. Although he didn’t know how to perform miracles, he still gave a try on his dream. He then learned to realized his Personal Legend and transformed himself into the wind. Moreover, Santiago could go back to the oasis with Fatima and be a shepherd, but he chose to follow his Personal legend and figured out his ability to perform miracles (Coelho 145). Santiago transformed himself at the end of the journey by realizing his capability of making magic. He chose a hard path by leaving Fatima behind and continuing with his original plan to searching for his Personal Legend. His efforts were paid off by his own transformation with a realization of his abilities. This transformation process is similar to how lead is transformed into gold by the alchemist.

The novel is titled The Alchemist because Santiago’s journey to find the treasure mirrors the journey an alchemist makes to achieve the Master Work. Santiago stated that “I learned that many alchemists realized their Personal Legends, and wound up discovering the Soul of the World, the Philosopher’s Stone, and the Elixir of Life” (Coelho 79). This shows Santiago learned the complexity of alchemy from simple things around him, by watching everything around him, animals and nature. By reading the Englishman’s book, Santiago has understood more about his soul and also the soul of the world. According to The Alchemist ISU, Santiago “realized that everything on his journey and throughout his life comes down to one simple thing”. Santiago purified himself in order to achieve his Personal Legend and transformed himself into the wind just like \”The alchemist spent years in their laboratories, observing the fire that purified the metals. They spent so much time close to the fire that gradually they gave up the vanities of the world. They discovered that the purification for the metals had led to a purification of themselves\” (Coelho 77).

The novel is titled The Alchemist because Santiago became an alchemist. According to the alchemist, an alchemist is define as “a man who understands nature and the world” (Coelho 134). Santiago’s vision occurred when he saw the flying hawks on the sky and determined that an army is coming to the oasis, indicating that an attack is about to occur. This shows that Santiago penetrated the Soul of the World and has become understand more about the Language of the World. Santiago said that “I learned the alchemist’s secrets in my travels. I have inside me the winds, the deserts, the oceans, the stars, and everything created in the universe” (Coelho 140). In responding to the wind, Santiago showed that he understood the nature and interacted with Wind and persuaded it to help him transform himself. His confidence in stating that he knew the secrets of the alchemist and then later transformed himself to wind proved that he had the ability to transforms things which were possessed by the alchemist. Additionally, the alchemist stated that “ You already know about alchemy. It is about penetrating to the Soul of the World and discovering the treasure that has been reserved for you” (Coelho 130). This means Santiago overcame many difficulties and at the end managed to penetrate the Soul of the World, which is something closest to our heart. He saw things in his heart and pursued it until the end. He gave up being the shepherd, Fatima, and an easy life. His heart led him to his treasure at the end of the story. Also, from the conversation with the Englishman, Santiago concluded that he understood the Soul of the World and the Language of the World.

In conclusion, Coelho’s message is although a person may not get what they desire, if that person still follows his desires, the experiences he gains in pursuing dreams will serve a purpose greater than himself. This referred to how Santiago’s life transforms into a valuable thing like lead to gold, the journey he has to go through to find the treasure is similar the journey an alchemist makes to achieve the Master Work, and Santiago became an alchemist.

Why is the Novel Titled "The Alchemist"?. (2020, Sep 09). Retrieved from https://studymoose.com/why-is-the-novel-titled-the-alchemist-essay 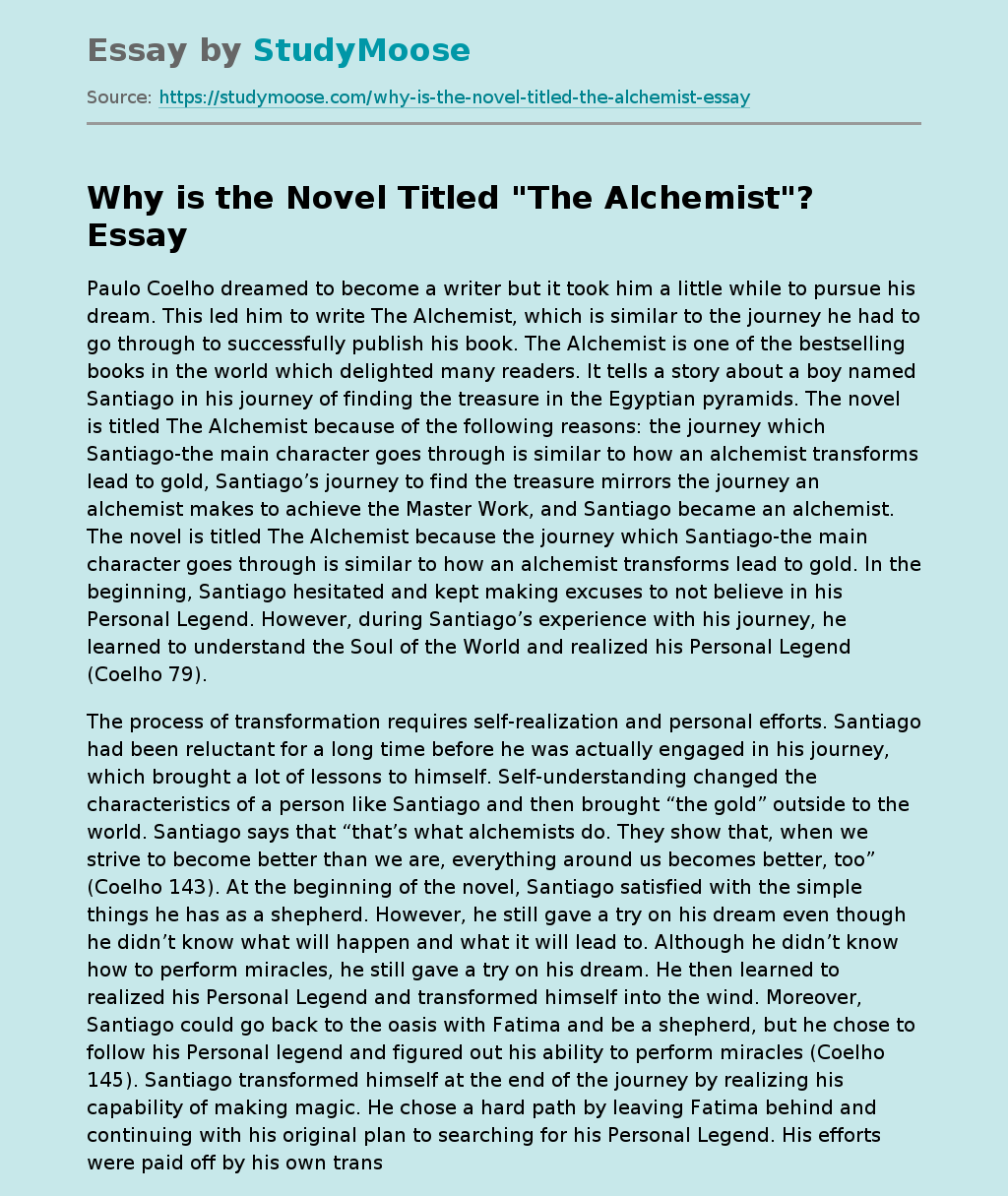