Why Is The Death Penalty So Bad?

What exactly is the death penalty? In simple words, it is a punishment given by the State to an individual for committing one of these crimes murder, rape, kidnapping or distribution of drugs, etc. The death penalty should be legal in the United States of America because criminals should face the consequences of their actions secondly the death penalty is less expensive than life imprisonment thirdly evil should be removed from society to bring peace and comfort to the families of the victims.

Don't use plagiarized sources. Get your custom essay on
“ Why Is The Death Penalty So Bad? ”
Get custom paper
NEW! smart matching with writer

The first reason that criminals deserve the death penalty instead of life imprisonment must be, that criminals must face the consequence of their actions. Organizations that are against the death penalty usually mention that even though the criminal did wrong, he/she deserved a second chance in life. But these organizations only think of the welfare of criminals. However, they do not care about the pain that the families of the victims are experiencing. Usually, when a criminal commits a crime heshe doesn’t think about the consequences of their actions, nor do they care about their actions.

For example, when a child is growing up and entering the adolescent age they begin to act disobediently toward their parents. They speak back, yelled and slammed doors, and due to their actions the consequences of their actions, for the most part, are not good they get in trouble many parents take their children’s cell phones so they can learn an important lesson to obey their elders.

The same goes for teenagers who start to grow up and become adults they have to obey the rules that are set up by the state.

Imagine a world were no norms existed the world be in chaos. This why rules were created in the first place. Going back to the topic of the death penalty for a lot of people this topic can be a sensitive and difficult topic to bring up.Because people think that is cruel to punish a human being using the electric chair, and lethal injection or hanging them.Because they believe that the prisoner will be in pain during the time of their death. But this not an issue anymore because knowing day technology has grown so much that makes the time of death painless. in the article Drugs used in the death penalty mentions the protocol that is used during the death penalty to make sure the process is been done correctly. “…drug regulation and correct drug use in lethal injection….”(Howard 18). The second point people bring up is that the death penalty goes against what the church say they believe that the only person who can judge their actions is a god because no one in this world is perfect. In the article Why countries choose the death penalty professor Carsten Anckar talks about “… the decision by the Philippines to abolish the death penalty in 2006 was strongly influenced by the Catholic church….”(Anckar 7).

Lastly, the groups that are against the death penalty often mention what about men/women who were wrongly convicted of the death sentence, and later on, were found innocent. Many years ago this might have been the case, however, technology has improved a lot recently since the past years it almost makes it impossible to make a mistake and condemn an innocent man to die if this actually happens it as to be because there was enough evidence that proves he did it. In most criminal cases a private investigator makes sure they have the correct information. By doing the DNA test, and recreating the scenario to make sure the story they are telling makes sense they also gather information from the witnesses. In the united states every single person as equal right no one can be condemned just because some else feels like it doesn’t matter if that person is poor or rich. The article restates the civil rights of every human being as a citizen of the united states “…no person shall be deprived of life, liberty, or property, without due process of law….”(Rizer 47). A Lot of people want the united states government to abolish the death penalty and replaced it with the death sentence instead because their no blood involved. Because they believe the death penalty does not follow the human rights protocol however that’s not always the case “…many, industries, can help prevent human rights violations from occurring….”(Howard 3).In conclusion, the death penalty can be a really controversial topic to bring up because it involves the suffering and death of a human being however criminals must face the consequences of their actions.

The second reason why the death penalty should be legal it’s because the life sentences are more expensive compared to the death penalty. Money is a very important factor when it comes to deciding whether a criminal should be sentenced to life in prison or convicted of the death penalty. In the first place, the government shouldn’t be expected to pay for criminals who are in a death sentence and that they deserve the death penalty. For example, every year the government collects taxes a big majority of the people taxes go to the prisoners this taxes should be going to the educational system instead to help students with their studies. Secondly, criminals can ask for as many appeals as he/she wants there no endless appeals, special treatment, DNA testing and they have equal right to ask for one of the best attorneys of the state. “…first, our system is required attorneys to provide the best representation possible for their clients….”(Rizer 50)This may not sound how much but there no limit of how many appeals criminals can get. This may sound cruel and not human, however, why should society have to spend their money paying for this criminals representative. Thirdly society had to pay for this criminal’s food, clothing, and many other necessary utilities for them to live a peaceful life in prison without having to work and earn their money like the rest of the citizens.

Yes the death penalty is also expensive however it’s only done once with each prisoner however the life in prison may take years or decades for a prisoner to die in the long run the money spends on the death penalty is nothing compared to the life sentence. “…California had shockingly spent at least $4 billion dollars maintain them and pursuing the capital cases…”(Rizer 49).life in prison may be less cruel for the prisoner and good news for groups that want to abolish the death penalty but what about if the criminal commits this crimes ones again .what if she/he kills someone in prison or worst he escapes and kills another innocent victim, yes this may sound ridiculous but these scenarios have happened before its possible it can happen again. This why a lot of countries have chosen to keep the death penalty. In conclusion, the life sentence is costing the united states a lot of money.

The third reason why the death penalty should be legal is to remove evil from society and bring closure to the victims’ families. In the first place, if criminals are not removed from society future generations that are growing up in this kind of world will see its okay to commit this kind of crime because they are not going to get punished for it. For example, when a kid starts to curse it’s because he as heard some else use this kind of language near him/her so, therefore, he thinks it is okay for him to say too. Secondly, if the criminal is only sentenced to life in imprisonment the victim’s families are going to feel pain, anger, and resentment towards them. On the other hand, revenge is not going to bring the victim family members back to life or stop crime from happening again, but it will bring peace to their soul. And lastly yes there are people who deserved a second chance to make up for their mistakes however the percentages of a criminal to change are low and the government cannot take this kind of risk of letting out a criminal and later regretting it.

Why Is The Death Penalty So Bad?. (2020, Oct 08). Retrieved from https://studymoose.com/why-is-the-death-penalty-so-bad-essay 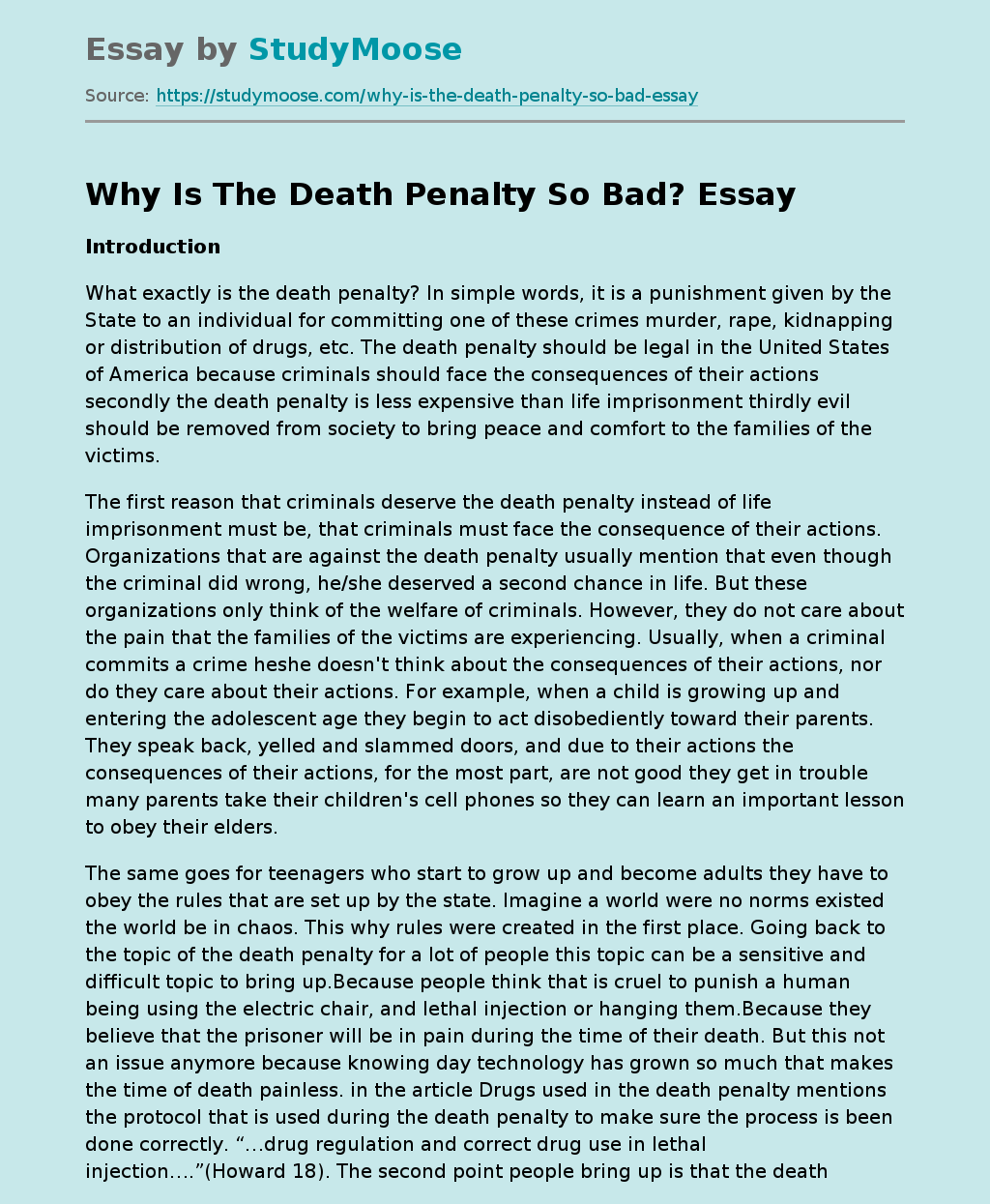