In the Novel ‘To Kill a Mockingbird’, Atticus Finch is portrayed as a truly unique individual. Atticus is a morally bound intelligent lawyer who believes in true justice for all. As a father, he puts a lot of emphasis on being an excellent role model for his children. The acts of heroism displayed by Atticus are firmly entwined with his beliefs about right and wrong. Even if it means discomfort for him, he prefers to follow his conscience and do the right thing.

+84 relevant experts are online
Hire writer
Don't use plagiarized sources. Get your custom essay on
“ Why is Atticus a hero? ”
Get custom paper
NEW! smart matching with writer

The most obvious heroic feature about Atticus is his sense of justice. He doesn’t show discomfort when defending a black man, Tom Robinson. He knows it is the right thing to do because all men are equal and should have the same chance in life as any other person. Many people in the community of Maycomb are bigots and unjust to Negroes and they don’t approve of Atticus’ even-handed approach.

Atticus is an understanding father who always encourages his children to do the right thing. He is also an excellent role model for Jem and Scout. He explains the importance of trying to understand others by ‘walking in their skin’ to consider their point of view.

He also teaches his children to have respect for others. For example, the time when Scout was upset because Miss Caroline told her she was too far ahead of the class in her reading, Atticus told her that she had to walk in Miss Caroline’s skin and see her point of view.

Another heroic quality is Atticus’ courage. He was called upon to shoot a dangerous dog because he was the best one for the job. This was a risky situation because one shot was is all it takes to kill a dog, but if this missed the dog’s attention would be on him and the sheriff, Heck Tate, this could be dangerous because the dog has a disease and could be spread if been bitten by. Also if he missed, the bullet would go in the direction of the Radley Place, which would cause chaos because the Radley’s could have been hurt.

Atticus doesn’t pull his reputation down to a lower level by retaliating with anger, for example, the time when Atticus was spat at by Bob Ewell. He didn’t react in any violent way; he just stood strongly and ignored him.

In conclusion, Atticus is a hero on many levels. He is a heroic role model to his children, and heroic in his beliefs and actions on human rights, even if most white people in Maycomb County disagree with him. Atticus always maintains his dignity in unpleasant circumstances and maintains the respect he earns from the people around him even if they don’t show it.

Why is Atticus a hero?. (2016, Jul 06). Retrieved from https://studymoose.com/why-is-atticus-a-hero-essay?post 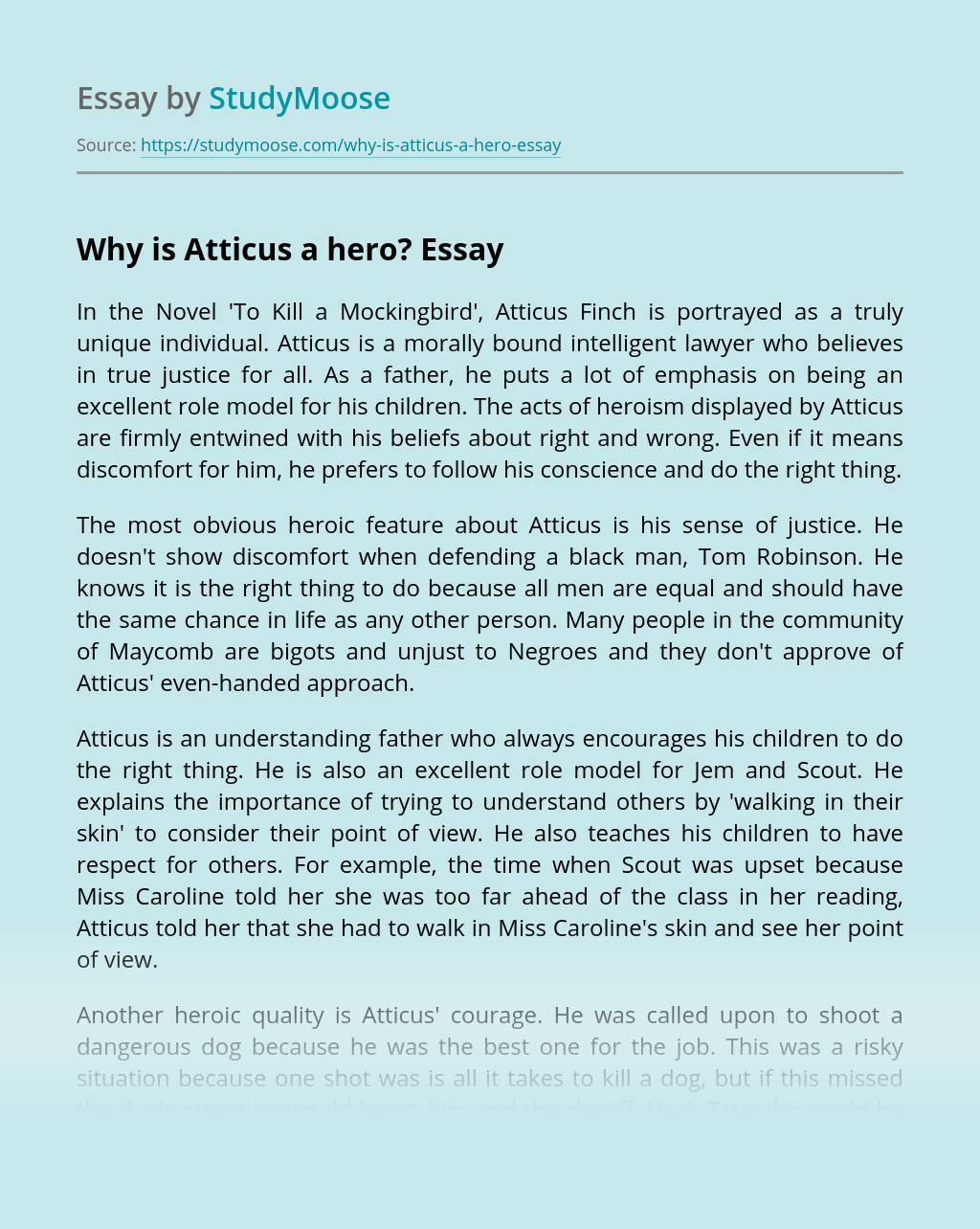