Why Huckleberry Finn Is My Favourite Character?

Huck Finn, the main character of “The Adventures of Huckleberry Finn” by Mark Twain, is someone who develops and changes over the course of the story. Initially, Huck is a very carefree and condescending boy that takes many risks and puts himself in danger.He can then be analyzed as a disrespectful boy that does not care about manners. By the end of the story, Huck fully changes to become someone with an open mind that is able to view the world around him in a new way.

Don't use plagiarized sources. Get your custom essay on
“ Why Huckleberry Finn Is My Favourite Character? ”
Get custom paper
NEW! smart matching with writer

Huck is a white and smart teenager from Missouri. He grew up with his abusive alcoholic dad who took little care of him. Thus leading to Huck not having a lot of necessities and wearing raggedy clothes. When he is adopted by a rich widow Douglas, he still wears his rags as clothes because he was used to them.

Huck is a boy who likes to play tricks on his friends and fit in. One of his many character traits is he is very condescending, he was invited to join a band of thieves with his friend Tom Sawyer. Huck said he would begin to smoke because he was bored. “All right, then, I’ll GO to hell– and tore it up” (Twain) All of this goes to show Huck’s youth and how he doesn’t care about any consequences.

Huck and Tom would invent all these little superstitions for fun and joke around with each other, this is shown in chapter 6 when they are discussing the remedy for warts and they say it’s a dead cat, but then Tom brings it even further to say that you have to go to the forest and do certain actions. This scenario shows that they are taking everything as a little joke and just a way to have fun. Another example of Huck’s youth is that he lies like it’s an everyday thing.

“What did you say your name was, honey?’….’M—Mary Williams.’ …’Honey, I thought you said it was Sarah when you first come in?’… ‘Oh, yes’m, I did. Sarah Mary Williams. Sarah’s my first name. Some calls me Sarah, some calls me Mary. Based on Huck’s lie, we must conclude that he is slick and a quick thinker because when he was caught he was able to improvise a lie that covered up for another lie.

Huck is ignorant because he approves of slavery and what it stands for, he believes that black people are property and that they must do the bidding of their master.Until the point Jim talked about his family Huck didn’t really think of Jim as an equal human. He treated him like a playmate and plays jokes on Jim. Huck would also tell Jim to get things for him like when they were looking for things from the house near Jackson Island. He also lacks to be civilized and clean. Initially, Huck shows evidence of being disorganized because his new clothes were “greased” concluding that Huck is uncivilized because he feels comfortable with unclean clothes.

Finishing chapter 17 Huck is beginning to realize that life isn’t just about smoking, fishing, and doing as he wishes. Huck matures and Huck makes the decision to go free Jim because he believed it was the right thing to do. Huck also helped another person, when in the beginning of the book (1st quote) he said the only advantage of helping other people is for the person being helped. Huck got no advantage actually risked his life in freeing Jim, but he knew it was the right thing to do. I like how Huck developed throughout the story. In the beginning, he was condescending, careless, immature but through conflicts within the story, Huck evolved into a man and a new person. He formed new, better ideas on racism and slavery. Contributing to these changes was made by a devious prank performed by Huck on Jim. Huck put a snake in Jim’s shirt, and moments later got a bite. Huck says in the book later on that he would not have done it if he knew that it was going to make Jim that upset.

Why Huckleberry Finn Is My Favourite Character?. (2021, Mar 16). Retrieved from https://studymoose.com/why-huckleberry-finn-is-my-favourite-character-essay 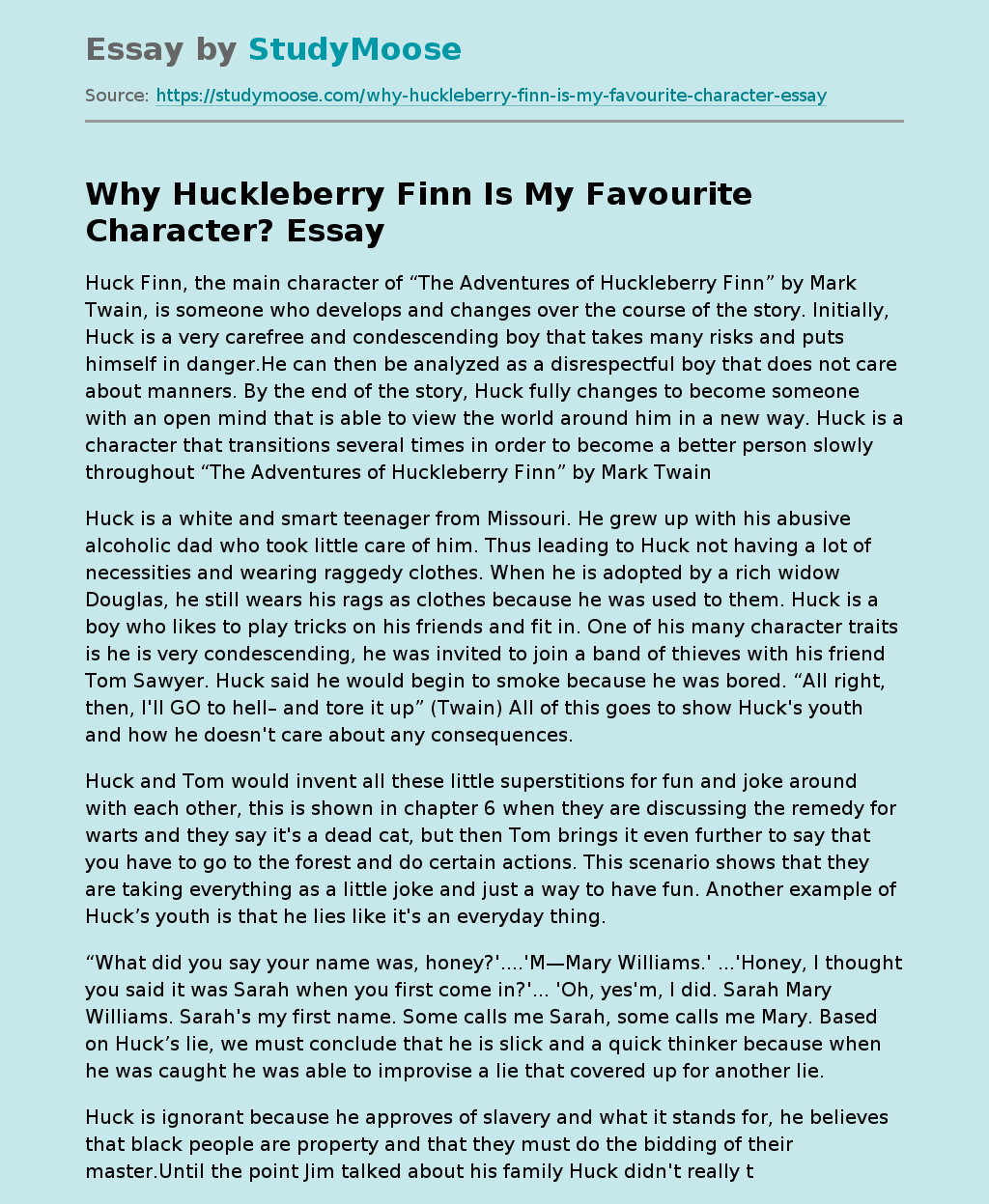