Why Eminem's "The Marshall Mathers LP" was so successful?

Don't use plagiarized sources. Get your custom essay on
“ Why Eminem’s “The Marshall Mathers LP” was so successful? ”
Get custom paper
NEW! smart matching with writer

Another reason why “The Marshall Mathers LP” had such a great impact on rap is because he was the first rapper to spark protest from the gay and lesbian communities and the anti violence and drug community. Lastly this album had such a great impact on rap because of Eminem’s lyrics and beats on each of his songs. After the immense success of his second studio album “The Slim Shady LP”, which as of Nov 2013 has sold over ten million copies in the United-States (Rolling Stone Magazine, n.

d.) and the failure of Vanilla Ice, no one believed that Eminem could top his last album and would be a one album wonder. The Marshall Mathers LP contained hit song after hit song, with songs like Stan, The Real Slim Shady, Kim, The Way I am and Criminal.

These all helped the album skyrocket in sales by selling 1.7 million copies in the first seven days of its release, and would become one of only a handful of albums to achieve diamond certification by selling over ten million copies.

(Rolling Stone Magazine, n.d.) Another reason why The Marshall Mathers LP had such a great impact on the rap game is because he was the first rapper to spark protests from the gay and lesbian communities and the anti violence and drug community. Throughout the whole album Eminem raps about killing or hurting people and has homophobic slurs in most of his songs. For instance, Eminem has a song called “Kim” named after his girlfriend where he raps about brutally cutting his wife’s throat and driving around with her in the trunk (The Onion, 2013). Songs like Kim and other like Kill, where he describes killing his own mother, have been thought to be hate lyrics by the anti-violence communities and there have been protests to have Eminem banned from being able to create hateful music like this. Also Eminem says homophobic slurs all throughout the album.

For example in the song Criminal Eminem says “That’ll stab you in the head, whether you’re a fag or lez”. Many people have taken this line and many other similar lines as homophobic when Eminem has said in an interview with MTV that they were just a joke and when he uses words like faggot he doesn’t mean that the person he is rapping about is a homosexual but he just means to insult them. (MTV, n.d.) Lastly this album had such a great impact on rap because of Eminem’s lyrics and flow on each of his songs. In every song on The Marshall Mathers LP Eminem is able to tell a story through is words. For instance in the song Stan, Eminem depicts two different views of the same situation. One view is of a deranged fan who is sending Eminem countless letters telling him how much he loves him and wants to meet him but Eminem hasn’t responded to him. By the third verse Stan is so infuriated by Eminem not responding that he kills himself, his girlfriend and the baby that his girlfriend was pregnant with. In the fourth and final verse Eminem gives us a perspective from his point of view.

Eminem opens the verse by saying “Dear Stan, I meant to write you sooner but I just been busy”. This means that Eminem was not ignoring all of Stan’s letters but the he doesn’t have time to write back to him with all the things that are going on in his life like touring, making new music and his own personal life. Eminem’s lyrics, his flow and word play are so good that a fellow rapper and friend Snoop Dogg calls him “The Great White American Hope” in one of Eminems songs because just as Jack Johnson in 1908 was a lone black boxer among many white champions, so too is Eminem one of the few top notch white rappers in hip hop. (Rap Genius, n.d.) In conclusion, the main “The Marshall Mathers LP” had such a great impact on rap was because no one was expecting Eminem to be able to follow up the great success that “The Slim Shady LP” had. Another reason is because he was the first rapper to spark protest from the gay and lesbian communities and the anti violence and drug community. Lastly this album had such a great impact on rap because of Eminem’s unique lyrics and flow on each of his songs.

Why Eminem's "The Marshall Mathers LP" was so successful?. (2016, May 10). Retrieved from https://studymoose.com/why-eminems-the-marshall-mathers-lp-was-so-successful-essay 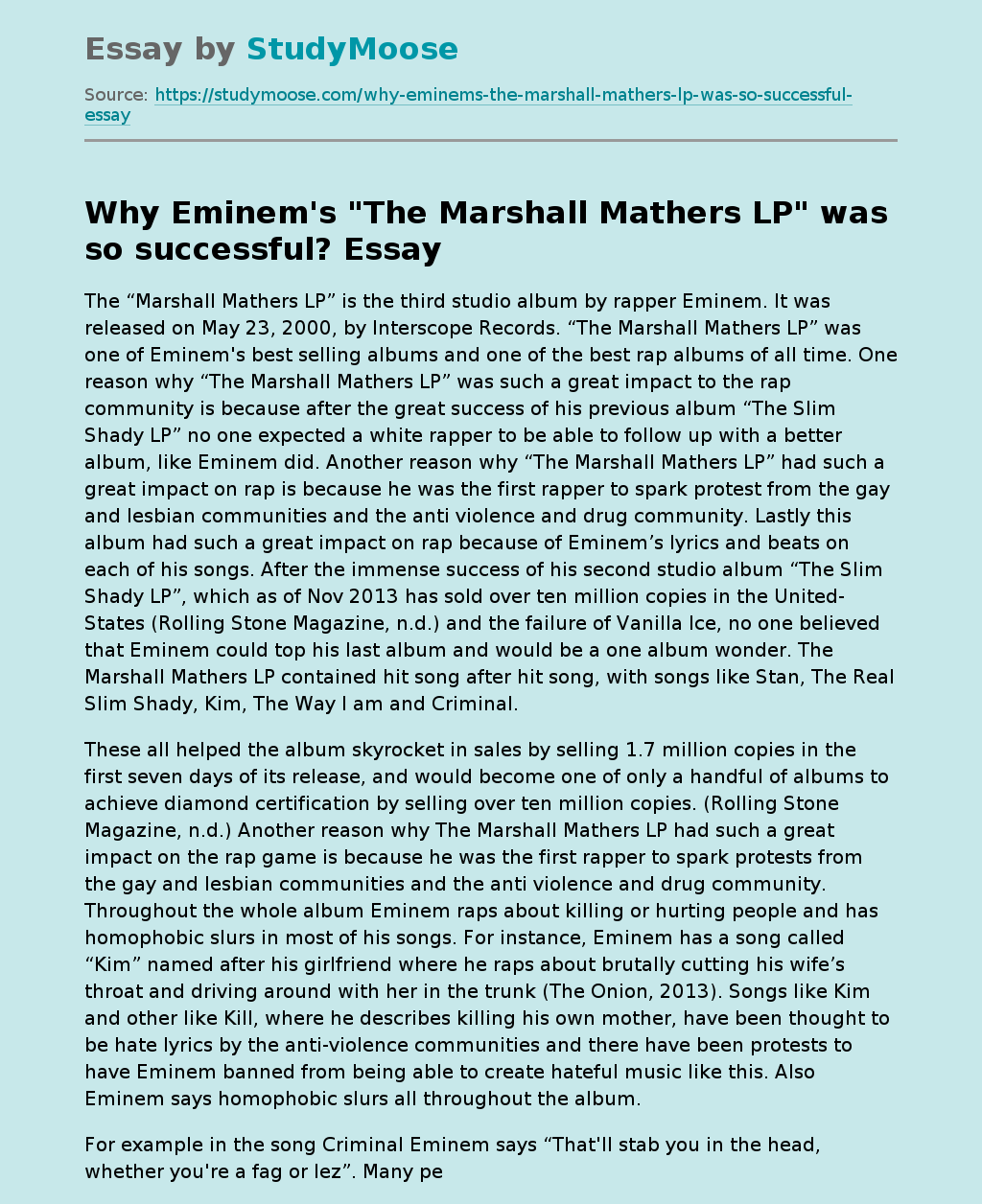