Why does the Inspector call?

Then the doorbell rings, Edna goes to answer the door, she brings in the Inspector, Inspector Goole. At first Mr. Birling is being friendly to him by saying “Have a glass of port – or a little whisky?” then only seconds after Mr. Birling says “(after a pause, with a touch of impatience) well what is it then”, then the inspector informs everyone “Two hours ago a young women died in the infirmary. She’d been taken there this afternoon because she’s swallowed a lot of strong disinfectant.

Don't use plagiarized sources. Get your custom essay on
“ Why does the Inspector call? ”
Get custom paper
NEW! smart matching with writer

Burnt her insides out of course”, her name was Eva Smith so the Inspector starts the questioning, he first shows the picture to Mr.Birling, Gerald says.”

Any particular reason why I shouldn’t see this girls photo, Inspector?” to which the Inspector replies, “It’s the way I like to work. One person and one line of inquiry at time, otherwise there’s a muddle.” Any way Mr. Birling saw the photo and recognized the girl, he had discharged her because she demanded a raise and when she wasn’t given one she asked why, according to Mr.

Birling she was “one of the ringleaders” and Mr. Birling said, “I can’t accept any responsibility.”

And he also said “Well its my duty to keep labour costs down, and if I’d agreed to this demand for a new rate we’d have added 12% to our labour costs.” Once asking Mr. Birling, he than turned to Sheila, he then explained the situation to Sheila, she sounded sympathetic, The Inspector than said that after 2 months “she had what seemed to her a wonderful stroke of luck.

She was taken on in a shop – and a good shop too – Milwards. ” He went on saying “After a couple of months, just when she felt she was settling down nicely, they told her she had to go….

All she knew was – that a costumer complained about her – and so she had to go “then Sheila confessed,”when I was looking at myself in the mirror I caught sight of her smiling at the assistant, and I was furious with her. I’d been in a bad temper anyhow …

I went to the manager at Milwards and I told him that if they didn’t get rid of that girl, I’d never go near the place again and I’d persuade mother to close our account with them”, so here the inspector commented “infact, in a kind of way, you might be said to have been jealous of her” Sheila replied “yes…” so the inspector said ”

And so you used the power you had, as a daughter of a good costumer and also of a man well known in the town, to punish the girl just because she made you feel like that” but when Sheila was replying “If I could help her now” the inspector jumped in saying “(harshly) Yes, but you can’t, its too late, she’s dead” this is when the inspector is conveying the message think of the consequences before taking any action whatsoever otherwise you shall regret it. 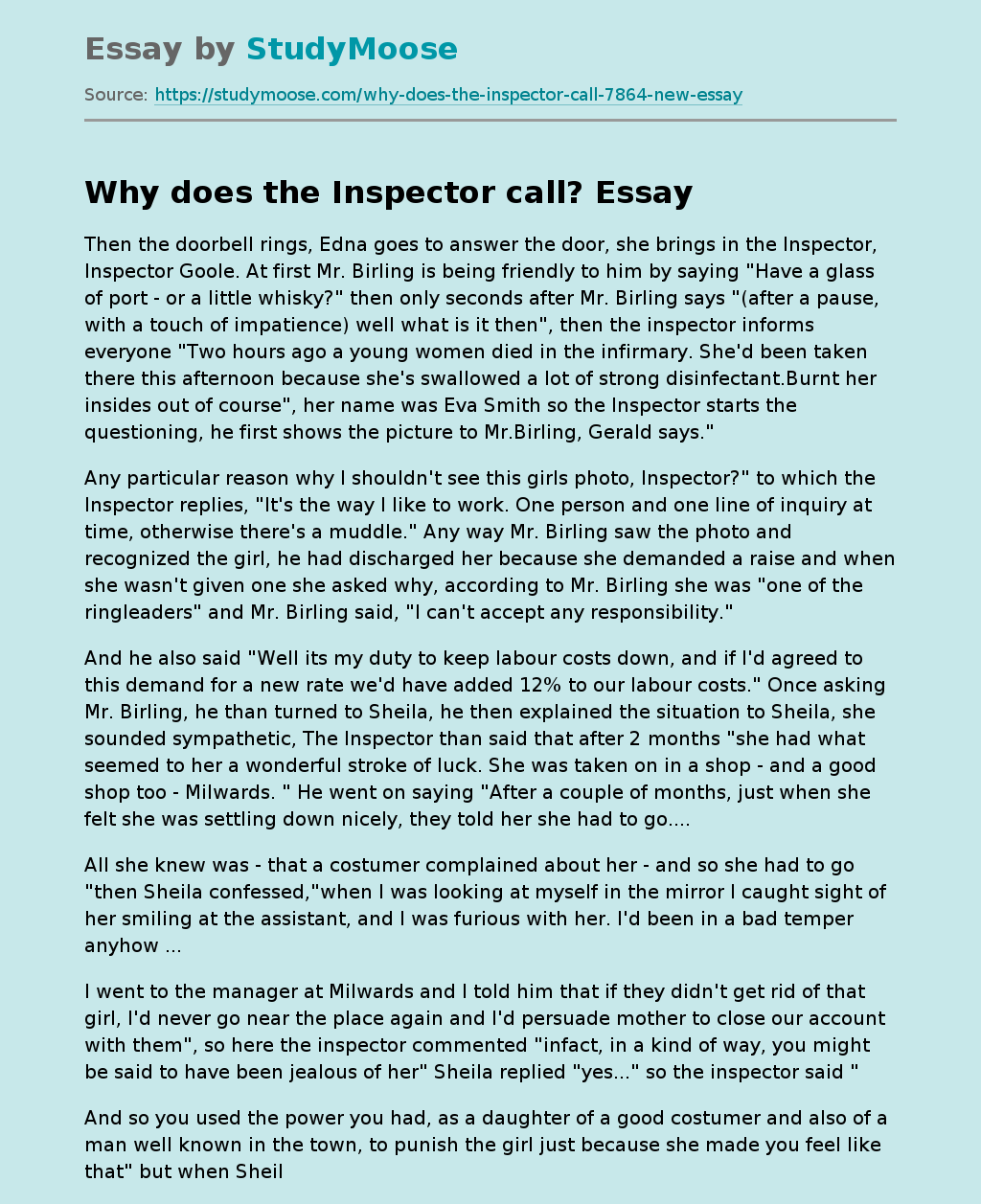