Why Do Some People Get Paid More Than Others?

Don't use plagiarized sources. Get your custom essay on
“ Why Do Some People Get Paid More Than Others? ”
Get custom paper
NEW! smart matching with writer

Since public sector employees have alternative work available in the private sector then what they could have earned in such an alternative job will influence how much they will have to be paid to beattracted to the public sector.

The most obvious example of this idea at work is the pay of Ministers, but teachers are also a good example.) This ‘essay’ sets out to examine what labour demand and supply influences exist, and how their influence may be distorted or limited by non-market factors. In particular it aims to demonstrate which labour market conditions are necessary for high wages, and which are sufficient.

In most cases the conditions are neither necessary nor sufficient.

Turning first to demand for labour. Without high marginal revenue product (MRP) no profit maximising private sector firm will pay high wages (note wage=AWC, which is less than or equal to MWC)), since it aims to make MRP=MWC. If MRP is not high, MWC cannot be high and therefore neither can the wage be high. This idea does not work in reverse.

High MRP does not guarantee high wages, as in this diagram. If a firm is somewhat monopsonistic the MWC could be high even if AWC is low. In these circumstances the pay would be low despite high MRP. This also explains why, even if an employer is not a chauvinist or a racist, it may pay women less than men for the same work, or blacks less than whites. For example, if a woman joins the workforce of such a firm for pay of $10 per hour, and in order to recruit her the firm pays all its female workers $10 per hour, when before it paid $9.99, the impact could be well above $10. If, for example, 1,000 hours were already being used, her MWC is $10 + 1,000x1c, which is $20.

Hiring a man for $15 per hour may be just as cheap if the man only raises other men’s pay by $5. If, for example, 250 hours were being worked already at $14.98 per hour. The calculation becomes $15 + 250x2c, which is still only $20. The monopsonist is here discriminating against female workers not because it doesn’t like them but because their supply conditions allow it to do so, rather as a monopolist may sell to adults and children at different prices because of different demand conditions. The role of MRP is frequently misunderstood, especially when considering lowly paid “essential” work such as that done by nurses. The misunderstanding parallels the “Paradox of Value” eventually solved by marginal utility theory. For years utility theory misplaced its focus on average or total utility, asking questions such as “Why are diamonds more expensive than water?” (given that they are fundamentally trivial rather than life-saving.) The answer is only forthcoming when marginal analysis is used. It is the last drop of water that is compared with the last diamond when a consumer makes a choice.

The first drop of water is essential, the last is flushed down the toilet. Because the first drop is so valuable, so is the total, but not the last drop. Water is judged by the value of the last drop, not the first, since it is the last drop that people are being asked to choose whether they want or not at current prices. Similarly, when looking at nurses we see that their most conspicuous actions may save lives, but they don’t spend all day doing that. They make beds, do clerical work, and so on. This is the work that would be taken off them if they were expensive. It would be given to less trained, cheaper people. This is what CEO’s and lawyers do.

They do not do their own typing and filing. If nurses were organised and imposed limits on their numbers and their job descriptions, then they could indeed achieve high pay because they could generate high marginal productivity. (Avoiding the worst of diminishing returns.) This is like saying that if you were to create the right conditions then people would swap large numbers of diamonds for small amounts of water. It’s called the middle of the Sahara desert. The diagrams below illustrate what could be achieved if high marginal utility (water) or high marginal revenue product (nurses) could be tapped into by their suppliers.

Summarising the demand side we have this. If, in a private market, employers do not receive high marginal revenue product from their last worker, then wages are doomed to be low unless perfect price discrimination allows some high pay for some high value work. (Just as a price discriminating firm might charge some of its customers high prices if it can, even if the general level of demand is low.) Monopsonists may well pay low wages if the workers are not unionised, because although wages are low MWC may be high. Wages are never guaranteed to be high simply because demand is high and some of the early MRP is high. To understand this we must turn to supply.

By supply we mean the willingness and ability to supply labour. Both must be present for effective supply. Again we must guard against assuming that conditions will create totally predictable outcomes, especially as far as “compensation theories” are concerned. These theories start by looking at the attributes of jobs from the employees viewpoint. What makes a job attractive or unattractive? Unattractive jobs, for example, may be any of the following: dangerous, stressful, dirty, low status, require long training, have inconvenient/antisocial hours. The prediction, or implication, is that since nobody would find such jobs attractive employers would have to pay well to compensate for this or find themselves with no or few workers. But this list of attributes comes close to describing nursing again.

The significance of the first sentence of this paragraph is now put to the test. Compensation theory, to the extent that it works, only influences willingness, not ability, to supply. To address the current example. Wouldn’t many nurses rather be doctors, or supermodels? What they do may not be what they want to do. If doctors are well organised as a cartel and maintain tight barriers to entry (at one time excluding females entirely from medicine degree courses, and still protected by strict sex quotas in some establishments such as NUS) then the barrier to entry may force potential (female) doctors to reconsider. Enforced restriction of supply by effective entry barriers must in turn artificially increase the numbers present in other industries or professions, and hence lower their salaries.

But barriers to entry may not always be so artificial. Ability may also matter. Women’s looks may keep them out of modeling. Even if they have nearly a good figure and nearly a very pretty face they may not earn much, if anything, as a model. In many professions being 95% as good will not bring in 95% of the pay. Examples abound in sport and entertainment, but also in law. (Would you pay half as much for a lawyer who was half as good as your opponents, and therefore virtually certain to lose?) In these areas supply is not homogeneous and demand responds in a rather odd way by considering ordinal productivity rather than cardinal productivity. The best earn a lot whilst the not so good earn little or nothing in these circumstances. Being a bit better makes you a lot more productive. So precisely what is supplied matters.

If a textile worker in Indonesia can produce 10% of what a worker in the US can produce then by hiring ten such workers and adding up the supply the employer gets the same result. Therefore it is logical that they each receive 10% of the US wage. Not so for models. How do ten do the work of one? (Same for tennis players, etc). Although this was introduced as an ‘ability to supply’ feature note that in many ways it is just as reasonable to see it as a ‘willingness to demand’.

Employers (on behalf of the public) would rather hire a good tenor for millions and get their money back selling CD’s (thus massively increasing MRP) than pay less for a poorer performer who asks for little but generates much less revenue. All this theory of the pay of “Superstars”, has become much more important now that their output can be reproduced so easily on TV, VCR, CD or CD-ROM. Consider how much the world’s best economics teacher might earn if all her lessons were on interactive DVDs. How much would the others earn then?

The high pay of the very rich (not entrepreneurs, note, but wage or salary earners) is often accounted for by theories of economic rent. These theories point out that if their pay were to halve they would still be willing to work as film stars, for example, because their supply is virtually totally inelastic. The theories also point out that as soon as a cameras can be pointed at someone their productivity, and pay, will rise enormously. A comparison of the pay of snooker players before and after the arrival of colour television supports this view.

Whilst all this is true it misses the “Superstars theory” point. The productivity of superstars also has a destructive effect on the productivity of other people. The arrival on the scene of a new star will lower the attractiveness, productivity, and pay of the old star, especially in sport. A sprinter who starts to slow down will not find his pay falling in line with his times, as a manual worker on piece rate would do.

Among the theories of pay for trained workers is Gary Becker’s ‘Human Capital’ theory. This theory treats humans, in a sense, as machines, in that it raises the question of investment. When a student decides to go to university they are making a choice to delay income in the expectation that they will eventually earn more. This is an investment decision. It looks like no more than another version of compensation theory, influencig the supply of labour.

There is more to it than that, since the decision, by changing the eventual productivity of the worker, will influence demand as well as supply. It has been argued that pay could be raised another way through this process. If university students, for example, learn nothing of value to their employers, they have still proved themselves by graduating. The degree is a guarantee of quality. The employer pays for this security, rather like a warranty, by offering higher salaries to these people, expecting good performance.

The picture that emerges of pay is rather messy, perhaps, but all the ideas discussed are based on economic theory, much of which has parallels in other areas of economics. Nowhere is this more true than in the recognition that marginal values (MRP and MU), not averages, matter most, and that barriers to entry may help to explain how some very pleasant jobs remain well paid.

Why Do Some People Get Paid More Than Others?. (2016, Jun 06). Retrieved from https://studymoose.com/why-do-some-people-get-paid-more-than-others-essay 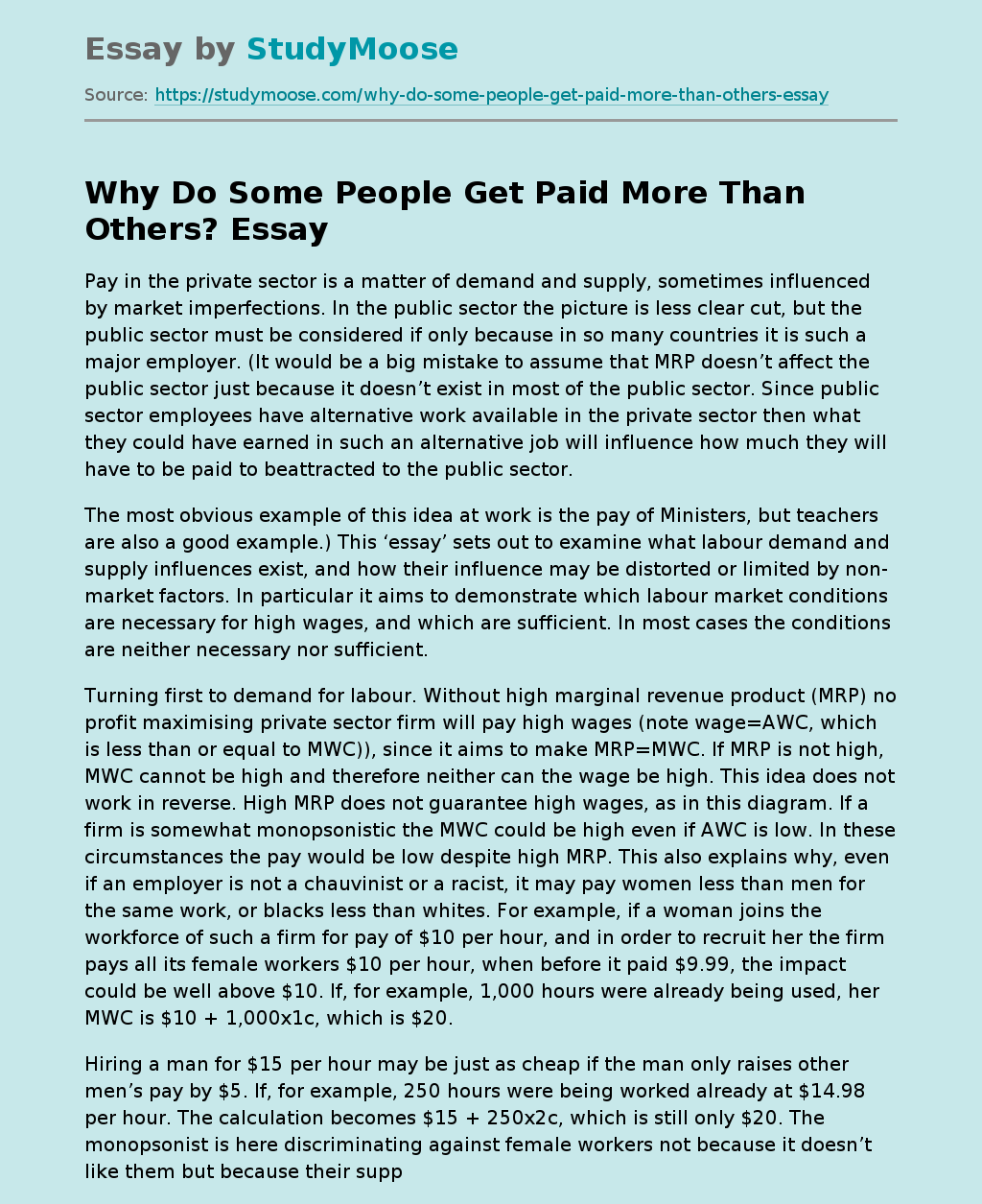