Why did so many people die in the 1995 Kobe Earthquake?

The Kobe Earthquake disaster took many innocent lives from the Japanese people in 1995. The main life loss was due to primary and secondary, physical and human factors. So throughout I will state some of the factors which contributed to the very high death toll. Kobe was very close to the epicentre of the earthquake, meaning that they took the heaviest part of the shock and the earth’s crust split. This brought down buildings in the centre of the town, the main port of Kobe was also destroyed, as the plates sub ducted some of the ground liquefied and part of the area fell into the sea.

Don't use plagiarized sources. Get your custom essay on
“ Why did so many people die in the 1995 Kobe Earthquake? ”
Get custom paper
NEW! smart matching with writer

The size of the earthquake caused buildings to collapse which meant the people within them perished, many of the older buildings were built with concrete roofs and the majority which were built before 1960 collapsed along with the wooden framed buildings. As the earthquake hit, gas pipes underneath the ground were hit by the tremors, this set off fires throughout the city.

Due to all the buildings that had collapsed, emergency services could not reach the victims with ease, they either could not reach some of the survivors or had to take a long diversion to get to them another way.

People who were trapped under rubble therefore could not be saved so many lives were lost due to the vehicles being blocked off by the primary human factor of the buildings collapsing, so one factor leads onto another here and caused a higher death toll.

But, for the people who were even rescued hospitals around the area had been hit as well so they had to find the nearest place where they could treat the survivors. Kobe was built upon a well known area for tectonic activity, so when the earthquake hit most of the city was destroyed beyond repair.

From all this destruction, secondary factors now started to take their toll. Relatives and volunteers now searched through the rubble in their bare hands searching for bodies either dead or alive. This meant that disease was now imminent because of decaying bodies, bare skin and such alike. Around 5,000 people died in this earthquake and over 350,000 were made homeless, with most of the port and city destroyed food was hard to come by so hunger started to set in on many of the survivors as well as shock. With some of the fires still blazing in the city smoke bellowed among the air so searches vision was restricted.

Electricity lines were hit during the earthquake, which blacked out the city. This meant that communication was now hard, as power was not running through the city so people could not contact relatives and friends, but also not able to have news on the earthquake from remaining buildings or even being told what to do from police officials and others. One of the main causes that so many people died was because of the density of the city. Japan has one of the largest populations in the world and a population density, so when the earthquake hit it killed a lot more people in one go due to the amount of people in the area.

The two different types of factors link with each other in a way. When the buildings collapsed which is a primary, human factor, later on this meant that emergency vehicles could not reach some areas therefore a secondary, human factor. The secondary factors made the devastation a lot worse than it could have been and many lives may have been saved had it not been for the secondary factors. An example of a physical factor would be the earths crust splitting where the stress had built up in the rocks of the Pacific and Philippines plates either side of the plate boundary. 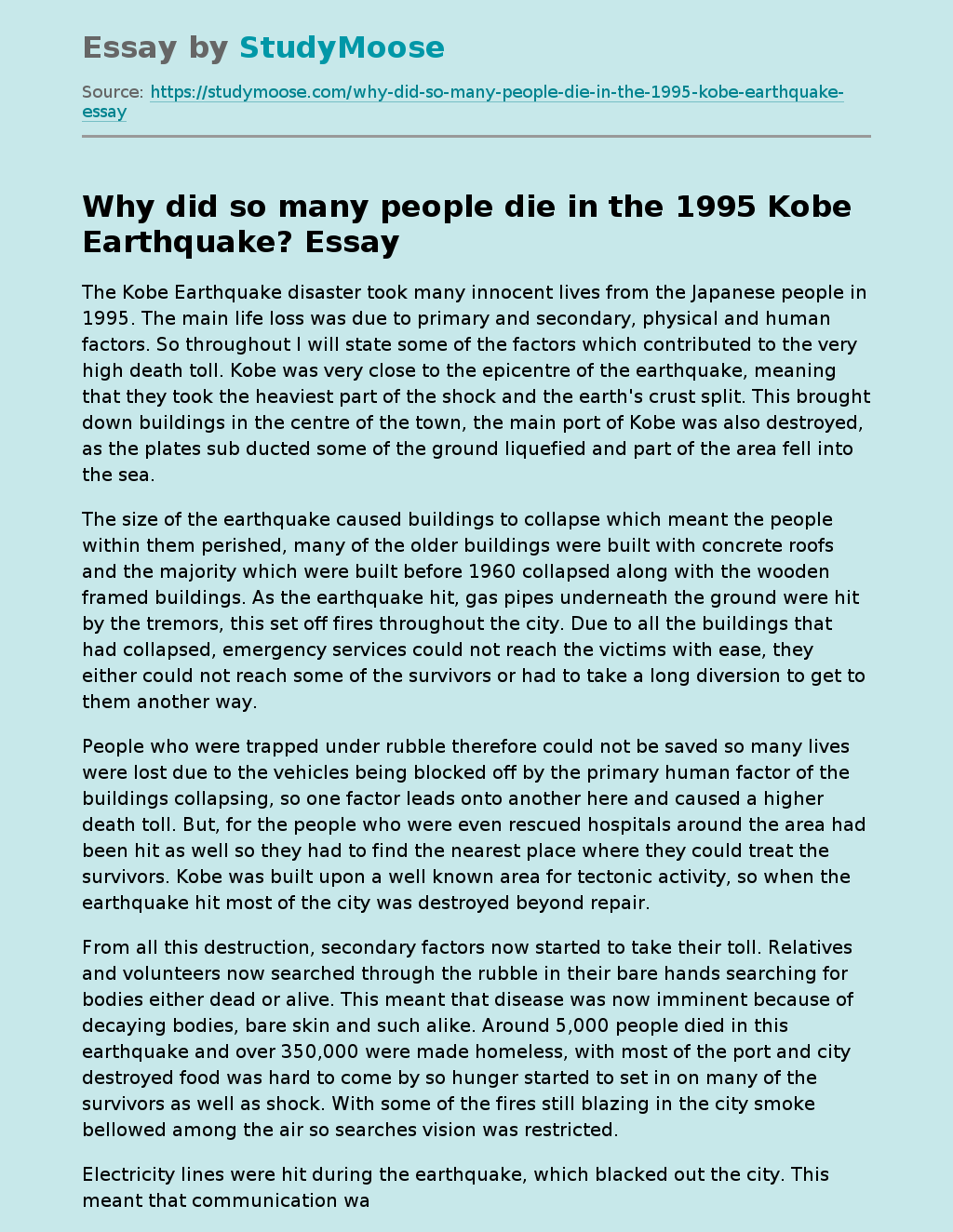