Anton Drexlers establishment of the National Socialist German Workers Party in 1920, brought about the rise of Adolf Hitler who led the most significant German political party of the twentieth century. By famous historians such as Alan Bullock, the Nazi Party is regarded as an organized conspiracy against the State which pursued power and position, for the sole object was to secure power by one means or another. Therefore, it may be misunderstood that Hitler and his Party gained considerable support, thereby controlled the Weimar Republic from its creation until the end of World War ||.

Don't use plagiarized sources. Get your custom essay on
“ Why Did Hitler Lose Support from 1924-1929? ”
Get custom paper
NEW! smart matching with writer

There is a large degree of truth that Hitler gained support from 1919 to 1923, when the Weimar was surviving a series of severe crises consisted of inflation (1923), invasion of the Ruhr (1924) by the Allied powers, and left/right wing rebellions (1919-23) within the nation.

Hitler promised people better lives and sought solutions to the German problems through targeting the scapegoats. Moreover, in 1933, Hitler eventually was given power by Hindenburg as the steep decline of the German economy renewed instability to democracy.

However, 1924-1929 indeed have been the years of declining for the Nazi Party in which they lost power due to several varying reasons, such as the Golden Years led by the German foreign minister Gustav Stresemann, and the disorganized Nazi Party as a consequence of the leaders that were arrested after the failure of the Munich Beer Hall Putsch, including Hitler becoming banned from speaking publicly until 1928.

One major reason for the greatly weakening Nazi Party in the mid-20s was due to the prosperity of the Stresemann years, as he brought about the era of calm and serenity where economic recovery and political stability was achieved to a large extent.

As the following examples prove, Weimar Germany 1924-9 was undergoing a renaissance. Under Stresemanns policies, recovery was helped by the adoption of the Dawes Plan in 1924, which allowed Germany to extend the period over which reparations had to be paid, and stimulated a large loan from Wall Street that helped Germany to keep up with its payments. At the same time Stresemann took drastic measures to end inflation and restore German currency. This clearly affected the Nazi Party, for the hyperinflation of 1923 had been ruining the middle class and Hitler saw this crisis as an opportunity too good to miss as a tool for gaining power. Stresemann withdrew oldmarks from circulating and replaced by new rentenmarks, which gave people more confidence and enabled a temporary economic recovery.

Furthermore, the French occupation of the Ruhr was ended in 1925 and the Locarno Treaty created a greater sense of security in Europe as it guaranteed the inviolability of the shared German, French, and Belgian borders. Even one of the most important steps in Germanys return to full freedom was achieved, which was the admission to the League of Nations in September 1926. In result, the German industry had survived the galloping inflation reasonably and Germany was able to make its reparations payments to the powers of the Entente; they repaid their war debts to the US, and from there the money flowed back to Germany in the form of loans. This effective system revived the German economy with unusual speed from 1924 to 1929, and German production increased in volume by 50 percent, and many industries were able to regain their dominant position in world markets. Apparently, in the middle 1920s Germany regained her pre-war standard of living, although the real strength of the German recovery is, however, still controversial, for political and economic weaknesses continued.

It has been stated in The Rise and Fall of Third Reich (1959) by William Shirer, an American journalist who lived in Germany from 1926 to 1941:Support for the Nazi Party had grown due to the countrys problems of hyperinflation and the French invasion of the Ruhr. By 1928 Nazism appeared to be a dying cause. Now that Germanys outlook was suddenly bright, the Nazi Party was rapidly withering away. One scarcely heard of Hitler or the Nazis except as a joke.As this statement implies, the Gold Age of the Reichstag meant that the Nazis message became less appealing and the party lost support for the Nazi Partys ideologies were too extreme and was mostly based on expressing German hatred toward the Treaty of Versailles, the current status of Germany and the inferior race, to gain support. However, the happier the Germans felt toward the economic prosperity brought by Stresemanns policies, the greater they became uninterested in extremists politics. In result, the extremist party did badly at the elections.

As shown in the table , in three elections held between 1924-9 their representation in the Reichstag was very low compared to other parties and was politically very weak. Thus, it remained the smallest Party in the Reichstag up to 1928. As unemployment fell and Germany was changing radically for the better, people were less discontented, and this resulted on the decline in support for the extreme right and the extreme left, also due to peoples lack of interest in the views of those who desired to overthrow the prosperous Weimar regime. On the other hand, the relative stability coincided with the increase in support for the Social Democratic Party which gradually regrouped and played the leader of the opposition lending its support to Stresemanns policies, which the Nazi Party detested.

The failure of the Munich Beer Hall Putsch weakened Hitler and withered his Party due to the many leaders being arrested and sentenced to jail, as well as Hitler being banned from speaking publicly until the end of 1920s. During Hitlers years in prison turning the energies to writing his autobiography Mein Kampf, the Nazi Party had broken up almost completely. The end of 1923 and 1924 had been followed by the arrest or flight of the leaders from the Party. For example, the Nazi commander-in-chief Hermann Goring remained abroad until 1927, Hitlers chief advisor Scheubner-Richter had been killed, and Dietrich Eckart, a journalist who was a key early member in the Nazi died at the end of 1923 due to illness. Furthermore, what disabled Hitler from gaining back support was the banning from speaking publicly until 1928, which was caused by the two new objectives set by Hitler in 1925 when he was released from prison. Hitlers new policies alarmed the authorities especially on legality which they viewed as hostility towards the Republic with the purpose of overthrowing the government.

Thereby, Hitler was immediately prohibited from speaking in public, first in Bavaria until May 1927, and soon this prohibition extended to other German states as well which lasted until 1928. Sure enough, this was a severe handicap for a leader whose greatest asset was his ability as a speaker. Some may argue that the ban on his public speaking allowed Hitler to turn more to writing between 1925 and 1928, and therefore cannot be counted as the major reason to why Hitler and his Party had lost power. However, although during these years Hitler wrote the first (1925) and second volume of his autobiography Mein Kampf, the book was filled with pages of turgid discussion of Hitlers ideas, written in a verbose style which was both difficult and dull to read, to the extent that Max Amann, who was to publish the book, was deeply disappointed.

According to one of Britains most distinguished scholars, Alan Bullock, Mein Kamf was an interesting book for anyone trying to understand Hitlers mind, but as a party tract or a political best-seller it was a failure because only a few, even among the party members had the patience to read due to his thwarted intellectual ambition, the desire to make people to take him seriously as an original thinker and the use of long words and constant repetitions. In fact, the book sold 9,473 copies the year it was published, but sales went down from 6,913 in 1926 to 3,015 in 1928, which shows how the Germans were getting uninterested in his extreme policies.

However, in the year that set an end to the Golden Age when the Germans needed answers to their problems encountered again, the sales more than doubled and shot up to 50,000 in 1930 and 1931. By 1940, six million copies had been sold. This proves how Hitler was ignored by people in the mid-20s due to his lack of communication and unstable Party, but gained support almost immediately as the Great Depression started as people were in need of solutions to their struggles.

For Hitler and his Nazi Party, 1924 to 1929 had been the years of decline and reorganizing for the rise of power. During this period of economic recovery and political stability, the extreme right wing Party had been losing support due to the bright vision of future Germany and the ineffectiveness of the Party itself. They were eventually saved by the Wall Street Crash of October 1929, the event which was crucial to the Nazis as higher levels of unemployment was gradually emerging as a problem and people were unhappy with their living standards. The world-wide slump and the decline of the German economy, though not a sufficient explanation, was certainly an essential precondition for the Nazified Germany. In our world today, the rise of the Nazis is regarded inevitable; however, regardless of the fundamental flaws of the Reichstag, the period of Golden Age for the Weimar Republic suggested the possibility of preventing the worlds greatest tragedy from occurring to a certain extent. 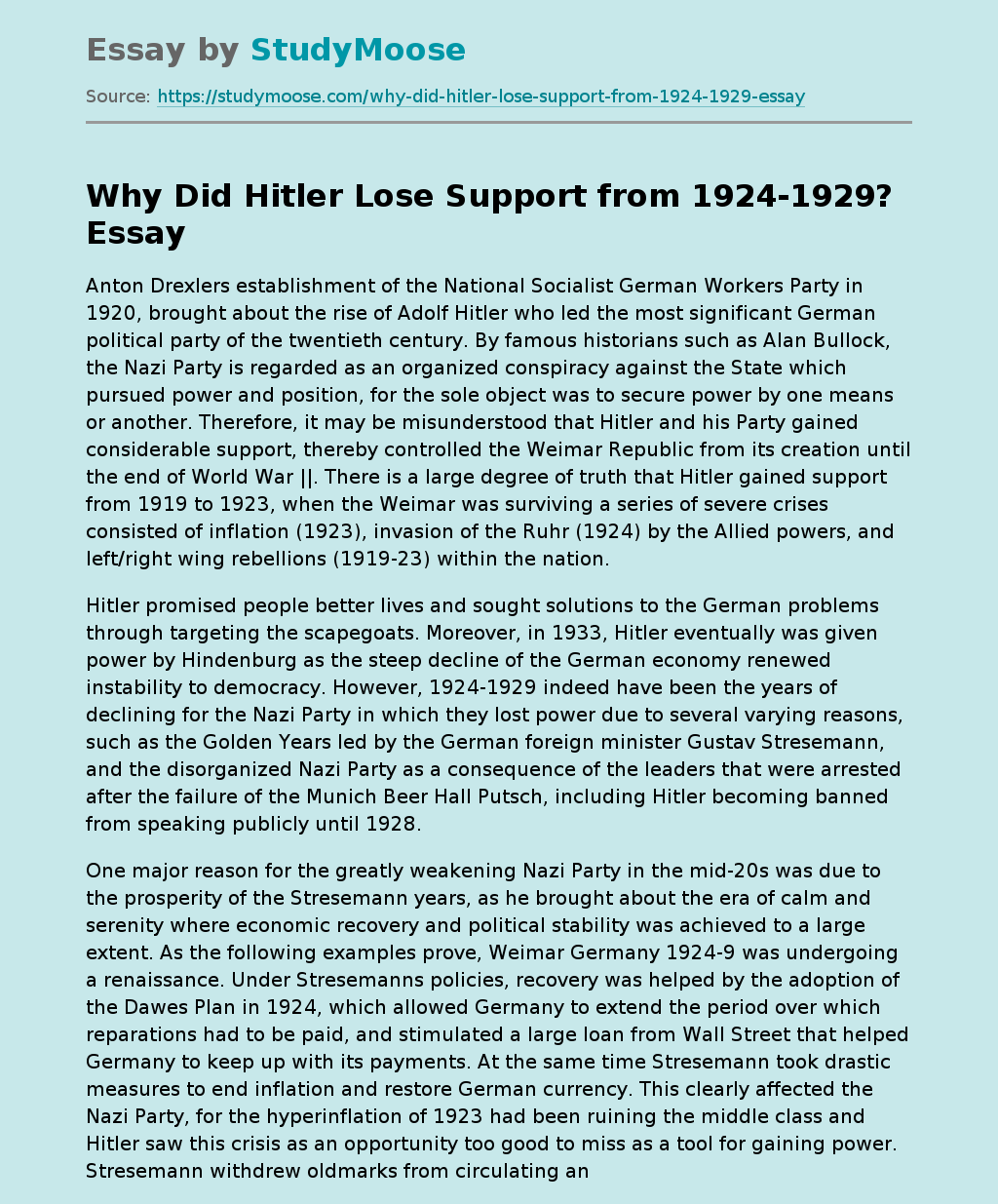