Why culture is important in doing international business? Essay

In the business world today, borders are blending and multi-national mergers are causing many company nationalities to become indistinct. As the globalization of markets rapidly increases, many companies are finding international expansion a necessity of competition. The world is greatly affected by this movement towards a global market, and many companies are finding it extremely important to adapt to other cultures. The most considerable obstructions to successful international marketing involve misinterpretations and contrary views resulting from cultural differences. Being both aware of some of these issues and prepared to make the necessary accommodations can save companies time, effort, and a considerable amount of money.

Don't use plagiarized sources.
Get Your Custom Essay on Why culture is important in doing international business? Just from $13,9/Page

Culture, being intangible in shape, builds up of a particular society’s behaviors, from religion beliefs to dressing style to art to methods of farming. Trompenaars and Hampden-Turner (1997, p.3) consider that culture is a shared belief of a group of people. Also, according to Mahoney, Trigg, Griffin and Pustay (2001, p373), culture is “the set of values, attitudes, beliefs, behaviors and customs that distinguish a society”.

Besides, in the context of international management, culture is defined as “everything that people have, think, and do as members of their society.” (Holt & Wigginton, 2002, cited in Ferraro, 1990). Culture reflects social rules however it might be defined, while business must be conducted within the context of the society, a society culture thereafter guides the firms how to run in such society. Understanding culture constituents might help companies visualize the effects on conducting business.

The reasons why understanding culture is important in doing international business will be discussed associated with examples. In further response to this question I will subdivide benefits from appreciation of culture as marketing products, managing workforces, and dealing with host country governments (Mahoney et al, 2001). Finally, the paper will conclude that doing business with multiple cultures can be a challenging venture; only those being well prepared for importance of understanding culture might eventually success.

Doing business over borders and through time zones has become commonplace in the twenty-first century. International firms are consistently examined by the cultural differences between countries when they expand their products or services into foreign markets, and seek the most productive and talented employees of the world out. Technological advancements in communication and reductions in transport costs make it necessary to do business in a cross-cultural environment. Doing business with multiple cultures can be a challenging venture for companies who try to market abroad. Therefore, only those who understand the importance of the role of culture in international business activities can remain competitive advantages. Whereas, many notable companies including Nike, Ford, IBM, Hewlett-Packard etc. once failed on the way of their expansion in foreign markets. As well known, Nike is a notable sport brand that rules the athletic shoe market throughout the world’s range. It once spent US$200 million to sponsor Brazil’s national soccer federation and took the Brazilian team on an annual five-game global tour.

Brazilians however saw Nike’s “money will get you everything” strategy that is succeed in USA offending their passion and history, Nike thereafter was filed a lawsuit alleging that Nike was forcing the country’s national team to play unnecessary exhibition games. Nike once produced a television commercial featuring Satan and his demons playing soccer against a team of Nike endorsers. The advertising was a big hit in Nike’s home turf, but some European nations refused to broadcast it because they thought scenes were too scary and offensive to children. (1) Nike has a well-deserved reputation for producing controversial advertisements. Recently, it adverts featuring basketball star LeBron James slaying a Chinese dragon and a kung fu master.

This ad has been banned in China and met with a flurry of criticism in Singapore. (http://www.busrep.co.za/index.php?fSectionId=&fArticleId=2337753). (2) Dragon, generally as a symbol of Chinese culture, and kung fu master, as a symbol of national pride, being defeat by American basketball, a symbol of American culture, are difficult to accept by most Chinese people. This is another typical failure sneaker giant suffered in foreign market due to ignorance of local society culture. Correspondingly, understanding importance of culture is a key factor if companies wish succeed in conducting international business. Generally speaking, understanding culture is able to benefit international business people in marketing products, managing workforces, and dealing with host country governments (Mahoney et al, 2001).

Multinational Enterprises (MNEs) almost always attempt to sell their products and services into foreign markets so as to reach business most productive. Successfully doing business with international clients not only requires mastering international business rules and regulations, but also being similar with local society culture and regional etiquette. Any ignorance for customer’s culture might cause misunderstanding, awkwardness, reverse and even business failure. As Ricks (2000) said “cultural differences are the most significant and troublesome variables… the failure of managers to fully comprehend these disparities has led to most international business blunders.”

At the meantime, a successful foreign marketing strategy in one country often does not have to hit another one owing to each culture has its own idiosyncrasies. Strategies that succeed in America will most likely fail in India, accordingly, cultural differences is also a challenge for already successful international business explorer in certain territory or time zone contemplating expansion into new markets. There is no doubt that skillfully manipulating cultural differences in the worldwide marketplaces is one of the most important marketing strategies in business globalization literature.

Understanding cultural differences of employees from different culture background helps international business managers manage their people more effectively. As market expansion, MNEs usually hire local employees including senior managers because of their cheaper labor and similarity with local society culture (this kind of situation usually occurs in which western developed countries invest into less developed countries). These employees with different personality traits and need structures might affect their behavior and expectations in the workplace. For example, culture attitudes such as time, age, and status etc. might vary with different countries. Time concept is paid attention to in western countries like Australian, Canadian and Germany in which their prevailing attitude is “time is money.

On the other hand, in some Latin American and Arab cultures, unscheduled habits are thought of as a commonsense. So do not be offended by your senior managers being late to a meeting. As Mahoney et al. (2001) argued, “International business people, who face the challenge of managing and motivating employees with different cultural background, need to understand what these personality traits and need structures are, and how they differ across cultures. Therefore, understanding sometimes-extreme differences may help international managers build better rapport with employees which could be the first step of managing them effectively.

The building of harmonious relationship with host country government is a vital part of any venture, and such relationships rely heavily on an understanding of national culture. The premise of establishing rapport with government is obeying local law and custom. Lack of knowledge of local culture may lead to trouble and even lawsuit. Foregoing ad of China’ dragon not only offends traditional symbol of China, but also breaks the law of National Advertising Act – ‘any ad cannot harm country’s reputation’. In Saudi Arabia, the law prohibits the wearing of neck jewelry by men, and westerners have been arrested for neglecting to observe this rule (Kammeyer, 2004).

Maintaining good relationship with local government is an important part a foreign business remains competitive advantages. Guanxi is a key element of society culture that helps people doing business in many Asia countries, especially in China. Guanxi includes personal connections, relationship between personal and social, and relationship between business (or personal) and government. It is of no surprises that those who possess good guanxi with governments will benefit especially from some government programs. In China, appreciation of the context of guanxi is a key factor for international managers to do business.

Globalization is becoming an inevitable tendency in the 21st century; under this tendency, it is obvious for the importance that international business people tend to understand cross-culture impacts. Many notable companies like Nike have learned some from one clash after another with foreign cultures, but there are still likely beyond the goal- global expansion. This means they need take more time to study culture of the country they try to enter into and reach understanding of mutual cultural attitudes and values.

In the sections above, three important reasons why understanding culture is important in doing international business are mentioned as to that understanding culture helps marketing products and services, managing workforces, and dealing with host governments. In a word, doing business with multiple cultures can be a challenging venture; hereby the ability to adapt to an intercultural perspective is probably one of the most crucial aspects of doing business in today’s “global village”.

Why culture is important in doing international business?. (2016, Jul 21). Retrieved from https://studymoose.com/why-culture-is-important-in-doing-international-business-essay 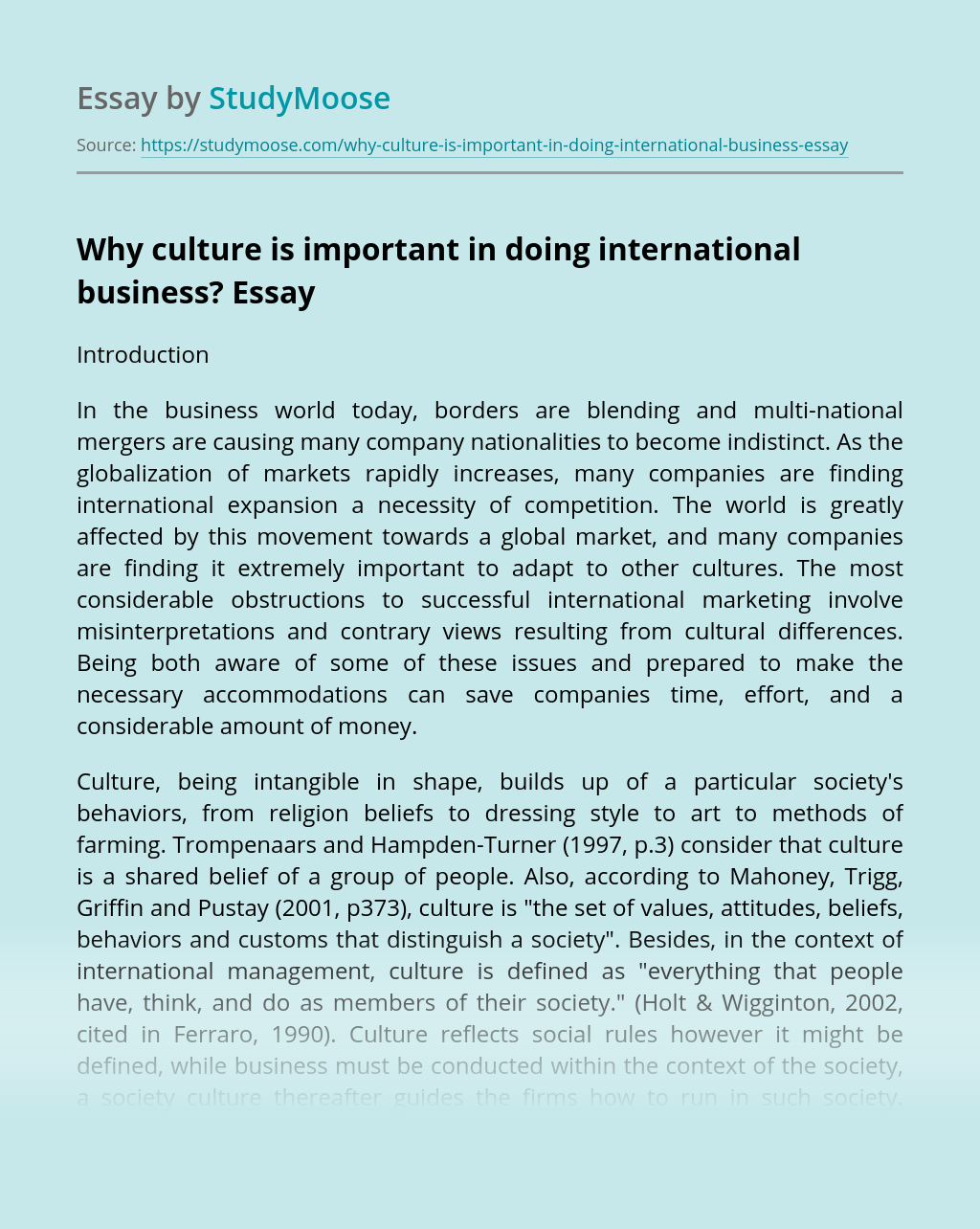 Mercedes-Benz is very popular these years, it is the latest premium automotive brand to announce record sales, following the likes of Audi, Buick and Rolls-Royce. More than 1,461,680 cars wearing the three-pointed star were sold in 2013, an increase of 10.7 percent on the 1,320,097 sold in 2012. And when take the sales of Smart... VIEW ESSAY

View sample
Get Essay
The Role of Internet in Business

The internet has changed a lot of aspects in the lives of people from all walks of life. Being in the 21st century, almost everything is made possible through the internet. Communication, research, shopping and teaching are made accessible online. Among the many fields of human interest, business is one field that has changed dramatically... VIEW ESSAY

The Eddie Stobart business is unpinned by the company brand, people and systems. This is their strategy to keep the business running successful for the next 3 years. The purpose of this strategy is to increase the sea, rail and air sectors. Strategic Planning Starting new partnerships with customers to further efficiencies. To take the... VIEW ESSAY