Why Company's Profit Does Not Equal Cash?

Why is profit not equal to cash coming in? Some differences such as loans received which do not impact the profit and loss statement are pretty obvious. Others may not be as obvious but you can break them down into three main areas:

However, until an entity reaches, and more importantly is able to manage to, such a state, all sorts of havoc can take place. It is very easy to reach a state where there is profit without cash. This is The Danger Zone. It is also important to keep in mind that you may run into a situation where you have good cash flow without profit. Say you are a retailer and collect cash at sale. Your expenses may be paid to vendors at a later time which may lull an owner into a false sense of health. The cash flow statement may look fine as the business is growing, but if margins and expenses are poorly managed, the owner may find themselves in an unprofitable situation which cannot perpetuate a healthy business.

What Are the Differences Between Straight Line, Double-Declining Balance & Units of Production

Depreciation is the allocation of an asset’s cost over its useful life. A company may choose from different methods of depreciation for financial reporting purposes. Straight line, double-declining balance and units of production are three such methods. Each method differs in the way it allocates an asset’s cost, which can affect your small business’ profit.

A business chooses the method of depreciation that best matches an asset’s pattern of use in its business. A company may use the straight-line method for an asset it uses consistently each accounting period, such as a building. Reducing balance may be appropriate for an asset that generates a higher quality of output in its earlier years than in its later years/ loss efficiency.

Depreciation expense reduces a business’ profit on its income statement. While the straight-line method reduces profit by the same amount each accounting period, the other two methods cause a company’s profit to fluctuate with all else being equal. The double-declining-balance method causes lower profit in the earlier years of an asset’s life than in the later years due to the greater depreciation expense in the earlier years. Units-of-production may cause unpredictable profit swings based on the amount of output an asset generates.

Why Company's Profit Does Not Equal Cash?. (2017, Jan 22). Retrieved from https://studymoose.com/why-companys-profit-does-not-equal-cash-essay 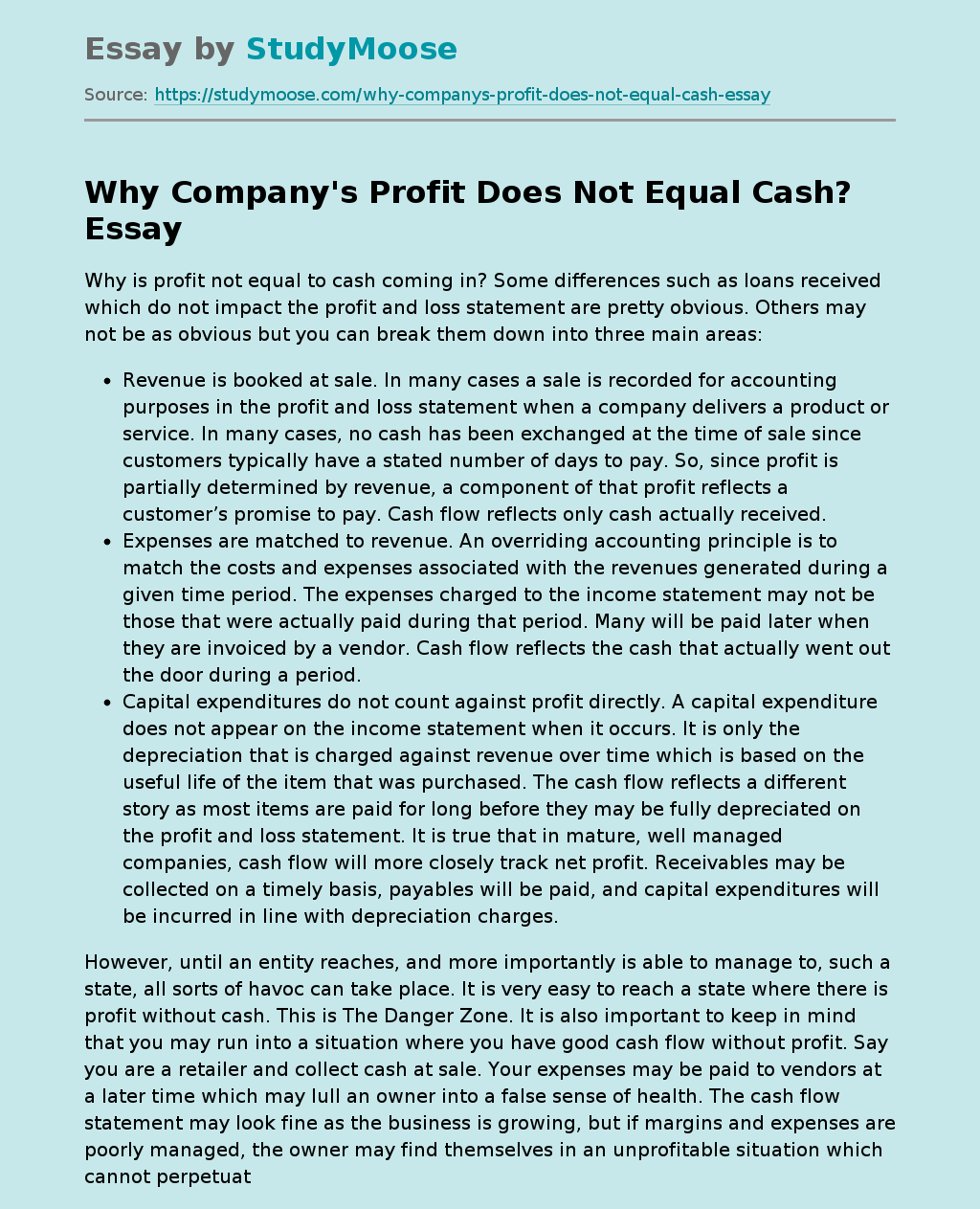