Why America revolted against Britian?

Why did the colonists revolt against Britain? They had many reasons to revolt that they stated in the Declaration of Independence, that was adopted July 4, 1776. The Declaration of Independence had 2 parts, the preamble which was just an introduction and the second part was all of the reasons for the colonies to revolt. Basically all of the reasons had something to do with the king abusing his rights and privileges to exploit or use the colonies.

The whole start of the Revolutionary war began because of the French & Indian War.

Don't use plagiarized sources. Get your custom essay on
“ Why America revolted against Britian? ”
Get custom paper
NEW! smart matching with writer

England spent a lot of money protecting American soil and they figured that the colonists should help pay for the war. The way England got the money was through a series of taxes.

The taxes were anything that Britain could think to tax. The stamp act taxed basically all paper products. The Sugar act taxed molasses, sugar, and wine. There was others but I wont go into those till later. The problem with theses taxes for the colonists was they were being made in British parliament were they had no representation.

They started the slogan ‘no taxation without representation’ over Britain’s taxes.

That leads into mercantilism. Mercantilism is when a country thinks that the well being of the country is more important than the individual. England never really cared about the colonists they just wanted to keep getting bullion, and exploiting the colonists. The king didn’t understand that the colonists wanted to be under exactly the same laws as people in England or not be under any of them, especially not more laws.

The East India tea company was having trouble financially so England made it so the colonists could only buy that kind of tea. Well the prices were good but the colonists hated to be forced to do that and boycotted that brand of tea. Then they did a very interesting thing, they dressed up as Indians and went aboard an English ship throwing the tea overboard. This was the Boston tea party and it started an uproar in England.

I said I would get back to the acts and I will with the coercive act. The Boston tea party made Britain take action against the colonists, they did so with an act called in Britain the Coercive act but in the colonies called the Intolerable acts. The worse thing that this bill did was to close the Boston harbor. The Boston harbor was very important to the colonists because it was a huge center for trade.

The quartering act gave soldiers the right to be placed with families and have to be taken care of. The colonists didn’t like this one as you might guess. They disliked having to give room and board to someone that they didn’t even know. The colonists had so many acts imposed on them that were bad and it seems like none of them were good.

The enlightenment brought thinking to the colonists about revolting against a unjust government. It was not really until Thomas Paine wrote ‘Common Sense’ a 47 page pamphlet about why the colonists should revolt that they decided it was a good idea.

Why America revolted against Britian?. (2016, Jun 19). Retrieved from https://studymoose.com/why-america-revolted-against-britian-essay 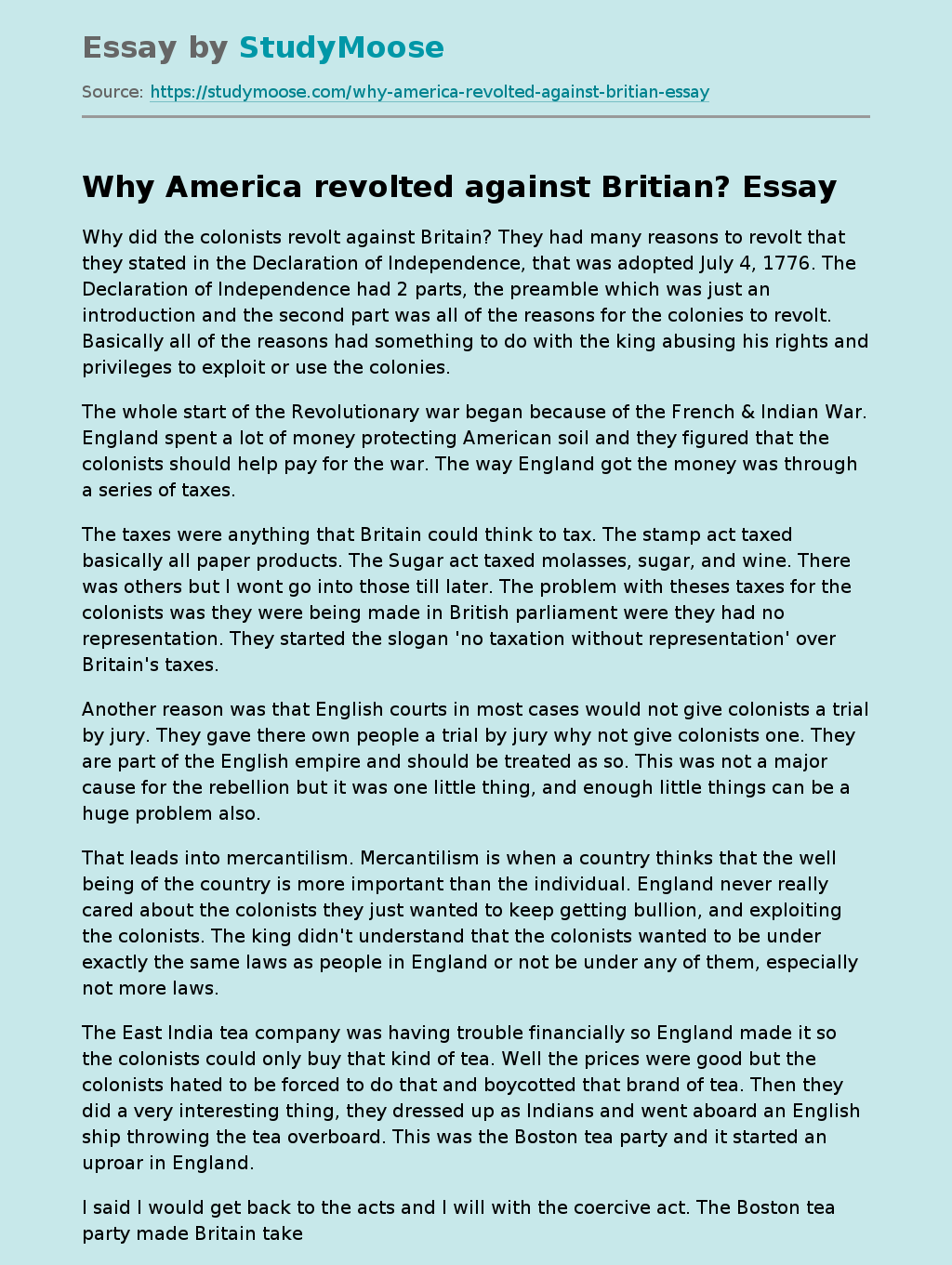