Whose Life Is It Anyway?-by Brian Clark

In the play, Whose Life Is It Anyway? ,composed by Brian Clark, considers the physical, emotional and intellectual journey of patient, ken Harrison, who presented with an unusual Journey because the quadriplegic which paralyzed from neck down. His journey is expressed he composer’s use of dialogue, characterization and use of language features and structure of texts. Ken’s quest on his journey is to discharge from the hospital and also his physical condition. While on his journey he gains new insights and understanding of himself and the world around him.

Don't use plagiarized sources. Get your custom essay on
“ Whose Life Is It Anyway?-by Brian Clark ”
Get custom paper
NEW! smart matching with writer

In ken’s physical journey, before the accident his condition was sculptor and teacher which was active life. Now he needs to spend rest of his life stay in hospital to support paralyzed body for accident. From that time his life’s journey has changed dramatically can no longer sculpt or teach and no more sex. There were two things to challenge in his obstacles which were physical condition and hospital.

In quote ken said “I can’t feel thing” that shows he cannot move anymore from neck down and his very frustrated of accepting his circumstance. The ken’s physical state as a quadriplegic influenced his emotions. “For me life is over” his physical journey has impacted on his inner journey is that he no longer want to live.

In Ken’s language he uses shows he’s an intelligent, quick, witted and humorous. He also uses sexual innuendo. In emotional journey ken describes himself as “I’ve only a piece of knotted string between my legs”.

He was frustrated and realizes to his embarrassment, that he engages in sexual banter to compensate for his physical inadequacy. In ken’s intelligent uses his mind and languages as his weapon to fight for his right, he tells DR Scott she’s “Impotent” or not powerful when she tries to give him valium. Ken’s humor also includes sexual innuendo through the use of puns with more than one meaning.

The quote from “have me on the floor sister please” and “Have I finished Nurse. I haven’t started her yet!” its shows Ken’s sexual references are humorous and reflect his emotional frustration because he can no longer have a sexual relationship. He refers hospital as “Optimism Industry” and “monstrous regiment an extended Metaphor of the garden or hospital, where ken is the plant” and he feels he belongs on the “compost”. Ken’s use of expletives with Mrs. Boyle “bloody” and “bugger off” show his emotional frustration with the “so-called” professionalism that does not treat him as a human being. DR Emerson considers he must keep Ken Harrison alive, no matter what the quality of his life would be. Ken Harrison considers he has the right to be discharged, and so to die.

In ken’s inner of intellectual journey, the words “choice” and “dignity” are repeated in Ken’s lives. He has been patient six months and wants to be allowed to die, since he can see no way live with dignity. He does not want to live as and object of scientific virtuosity living with so much effort for so little result. Ken funds himself in a catch 22 situation, where his intelligence leads to want to die, but this intelligence is the hospital’s argument to keep him alive. Ken tells DR Scott that he does not want to face the challenge of learning to cope with his situation and become “a computer section of a complex machine” Ken’s challenge is to convince the hospital that he should be released to die. The world “release” suggests that ken was set his fiancée free, like a bird from a cage.

He was separating himself from the people his loved, on his other journey when he was active. Dr Emerson argues that he cannot agree to discharges Ken Harrison because it is his duty as a doctor to preserve life. He said Ken was incapable to making a rational decision because he was severely depressed and mentally unbalanced. “My Lord, I am not asking anyone to kill me. I am only asking to be discharged from this hospital.” He was already intended to die. There are decision causes two groups of form, one for who would deny him the right to choose to die and another for who see such a decision as the ultimate personal choice. Ken maintains his right to a personal choice to be sent home where he will inevitably die because he can’t live with dignity. Afterwards Ken had agreement from judge to be sent home.

Whose Life Is It Anyway? Demonstrates how the physical and inner journey can result in characters, like ken (and Dr Scott) gaining new insight and understanding of themselves and the world around them by facing the challenges and obstacles that impede the way. The composer, Brian Clark,

Expresses these ideas through the issue of physical, emotion and intellectual journey and his use of dialogue, characterization language features and
structure of texts.

Whose Life Is It Anyway?-by Brian Clark. (2016, Jul 24). Retrieved from https://studymoose.com/whose-life-is-it-anyway-by-brian-clark-essay 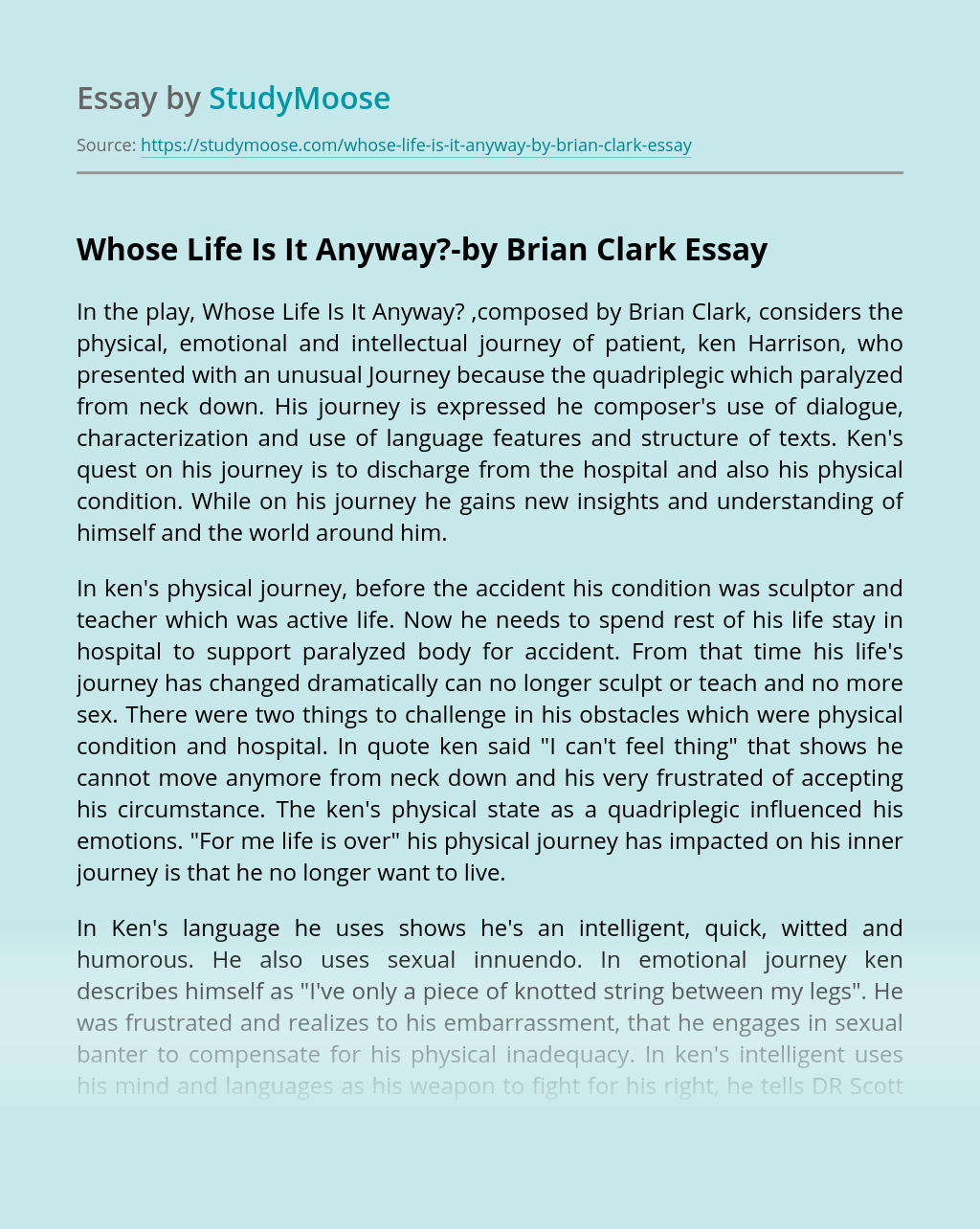