Who were the Tainos People

The Taino (pronounced Tah-EE-no) were the first “American” Indigenous Peoples encountered by Christopher Columbus and other Europeans in the Caribbean Islands in 1492. The Taino are also the first Indigenous Peoples to be referred to as “Indians” (Indios) in the Western Hemisphere. The traditional territories of the Taino extended throughout the Greater Antilles, the Bahamas, and even the Southern tip of Florida. The word “Taino” means “good people” in their ancient language. A major part of their ancestral lineage comes from South America.

Taino culture was not entirely homogeneous but some of the most elaborate expressions of the culture was found in the Dominican Republic/Haiti and in Puerto Rico. While Taino people could generally communicate in a common language across the islands, there were some dialect differences.

Descendants of these peoples still live throughout the Caribbean and beyond. The Taino were subsistence farmers growing food mainly for their own needs. Tainos in Hispaniola also blocked inland rivers to make artificial fish ponds. Yet, Tainos did not rely on field crops for all their food. The only domestic animal known to Tainos was a small dog which was fattened on maize meal and then eaten as a great delicacy. The simplest Tainos dish was ‘pepper pot’. Tainos feared to eat certain foods like; Mammy Apples which they believed were food for the souls of the dead.

The Tainos also did pottery; dugout canoes were made with great skills without the aid of any metal tools. Some Tainos canoes were large enough to carry seventy or eighty people or a tonne of trading goods. The canoes made it possible for the Tainos to carry out some trade in cloth, tools, weapons, furniture, tobacco, certain fruits and gold between the islands. On Hispaniola, the Tainos had darts with reed shafts and wooden points hardened with fire which were thrown with spear-throwers. They often used a stout wooden ‘sword club’, the macana, which the Spaniards soon came to fear, as a well-aimed blow could crush even a skull protected by a thick armor plating.

Who were the Tainos People. (2016, Nov 09). Retrieved from http://studymoose.com/who-were-the-tainos-people-essay 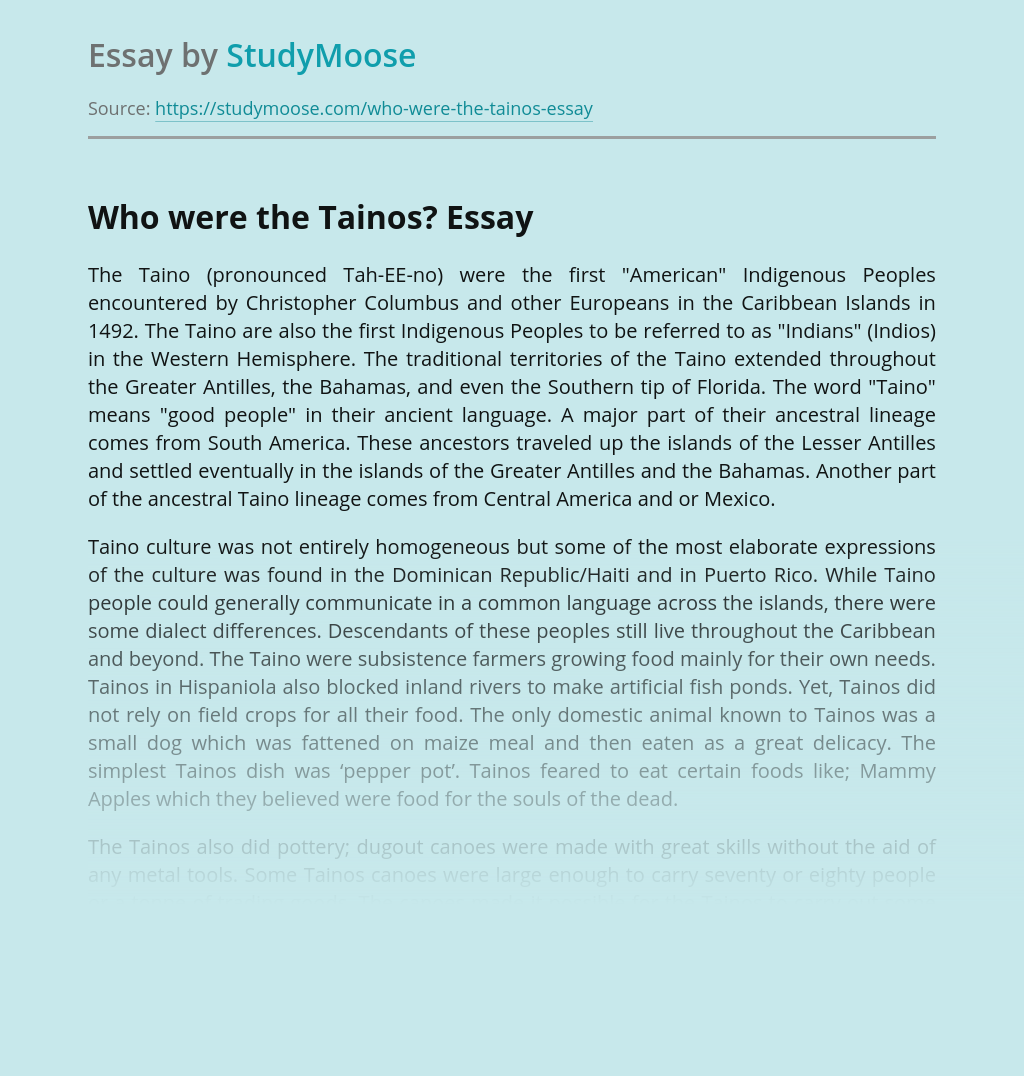 Don’t waste time
Get a verified writer to help you with Who were the Tainos People
Hire verified writer
$35.80 for a 2-page paper
Stay Safe, Stay Original