Who was more responsible for the Cold War?

The Cold War was an undeclared and nonviolent War between the USA and the USSR. There are different points of view to the date of the beginning of the Cold War by the historian. They argue that it started in July 1945, at the Potsdam Conference. Others argue that the dropping of the atomic bomb in August 1945 was the actual start of the Cold War.

Turn in your highest-quality paper
Get a qualified writer to help you with
“ Who was more responsible for the Cold War? ”
Get high-quality paper
NEW! AI matching with writer

Firstly, we are going to observe the Orthodox or traditional point of view. For the Orthodox, Stalin and the Ideology of Marxism-Leninism were responsible for the Cold War. Marxism-Leninism is a communist ideology that is based upon the theories of Marxism and Vladimir Lenin. It seeks to purge anything considered like Bourgeois or religious from their society.

They wanted to spread Communism everywhere in the entire world. They used aggressive force to “liberate” the Eastern Europe from Capitalist, but the truth was that they wanted to have control over those countries. Stalin made it pretty clear that he did not tolerate any rivals and wanted to dominate the world and for that to happen he used the influence of the Communism.

Stalin broke all his promises that he made in the Yalta conference, he did not let the Eastern Europe country have free election and took over as a dictator.

He also imposed a brutal political control and executed every political opponent in the Eastern’ countries. These States should have been independent but they were soon referred as Soviet “satellites”. Stalin was taking advantage of the military situation in Europe after the Second World War. It is interesting to see that even some Russian now declare that Stalin was more responsible for the outbreak of the Cold War. Stalin was viewed as an exhibiting “expansionist tendencies”. In conclusion For the Orthodox or Traditional point of view Stalin and the ideology of Marxism-Leninism were more to blame for the outbreak of the Cold War.

Secondly we are going to discuss how the USA was more responsible. The Revisionist view emerged mainly from American in the late sixties. The Americans were much stronger than the URRS, not only they experienced an economic expansion thanks to Europe that borrowed Billion of dollars to rebuild themselves, but they also had new armaments, the nuclear bomb. Stalin was well aware of his weakness compare to the USA and took control of Eastern Europe to as a defensive move to protect his country, Stalin’s policy was claimed to be only defensive. The URRS wanted to build a “buffer zone” to protect them from the Capitalism that Americans were reinforcing in Western Europe. The Americans benefit from their superiority and sent the Truman Doctrine so they could stop the Communism from spreading into Western Europe.

But The Revisionist view would argue that it was not their place to come and to interfere into Europe’s business. They tried to impose their ideals on other people, other culture; they wanted the world to have the same values as them for the market so they could do international business with Europe later on. It was true Europe needed help, they were in great misery, but the USA should not have imposed their ideal, even if they had the military force to do so. They also used the Marshall Plan to control Europe’s countries by economic dependence. They could later on remind them the debt they owed them. In conclusion the Revisionist view is the opposite of the Orthodox’, it is a movement that came later on and that took their idea on the opposite to prove that the USA was more to blame for the beginning of the Cold War.

Finally, we will ponder on the Post-revisionist view that claims that it was not one side that was more responsible than the other. The Post-revisionist appeared on the late seventies, thanks to the access of new archives on the Cold War. They based their ideas on the fact that both sides were equally responsible. They claim that Cold War was influenced by mutual misunderstood from each side and overreaction due to fear of another War. USA did not understand the USSR’s need for safety. They also did not understand how much they suffered and were scandalized by their “open-door policy”. On the other hand Soviets did not see how their decisions affected the European and American opinion in the West.

Moreover the two countries had the nuclear weapon which created a lot of fear in both sides and even for other countries that were not involved in those tensions. People were scared of Hiroshima or Nagasaki’s cataclysm and they were petrified to think it could happen again anywhere in the world. The development of nuclear weapons was less security from both sides. This is called the security dilemma. Defensive measures by one power were often seen as offensive by the other power. In conclusion the Post-revisionist view is that they are equally responsible for the outbreak of the Cold War.

In conclusion we can see that the third point of view might be the wisest interpretation. They see both sides and they accept that they have both did some wrongs and rights but they both wanted to help and raise their country. But it is true that usually historians are explaining how Stalin is more responsible for the outbreak of the Cold War. However, even today we still don’t have every information about what happen so we can only judge on what we know which might not be the entire truth.

Who was more responsible for the Cold War?. (2016, Jun 19). Retrieved from https://studymoose.com/who-was-more-responsible-for-the-cold-war-essay 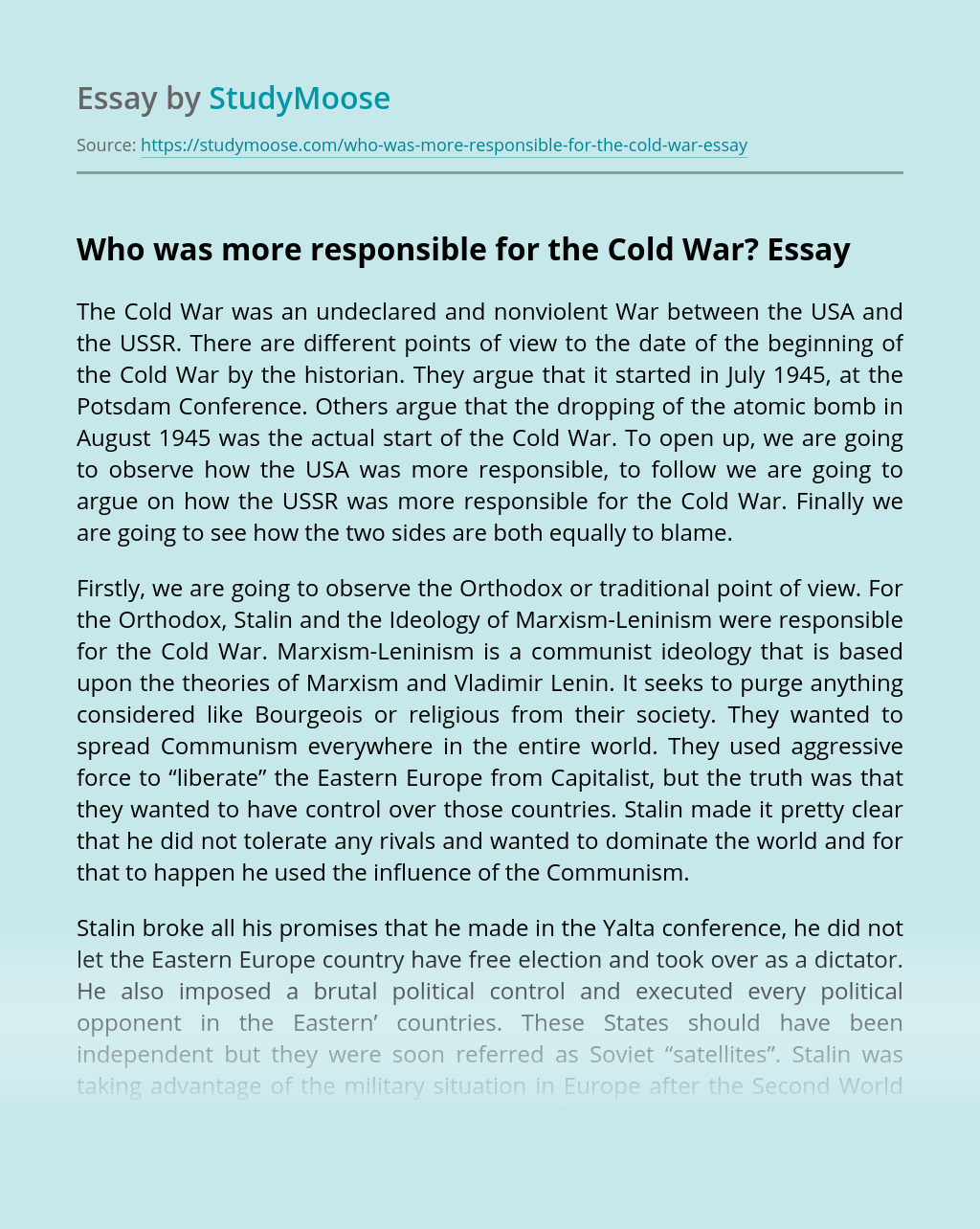 Turn in your highest-quality paper
Get a qualified writer to help you with
“ Who was more responsible for the Cold War? ”
Get high-quality paper
Helping students since 2015
Stay Safe, Stay Original