“He who never made a mistake never made a discovery”- is a quote by Samuel Smiles. Everyone has made a discovery at least once in their lives whether it has been unintentional or made through curiosity it can be a key aspect of transforming an individual in some way. I am here to inform you about the value of studying a new area of study; discovery for you year elevens. Discoveries can be unexpected and can be confronting but these can lead to rediscovering things that were once forgotten or something through relationships or even new understandings and renewed perceptions.

Don't use plagiarized sources. Get your custom essay on
“ Who Never Made A Mistake Never Made A Discovery? ”
Get custom paper
NEW! smart matching with writer

Robert Gray an Australian poet attempts to explore these concepts in two of his poems ”Late Ferry” and “The North Coast” and a related text “The Relative Advantages of Relearning My Language” by Amy Choi also illustrates this. New understandings and renewed perceptions about life and the world are made through the process of discovery. In the text “Late Ferry” Gray expresses his experiences with discovery when his understanding and perceptions on life alter.

Gray portrays his view on life when he is observing different stages of the ferries leaving Sydney Harbour.

The contrast of the yachts and the late ferry symbolises the simplicity and darkness of life. “Tomato stake patch of the yachts” metaphorically creates an image that the yachts are safely secured. This idea is juxtaposed to the “neon redness” in the water which conjures up ideas of danger. Gray takes the reader on a literal metaphorical journey where he discovers that life is much like the harbour where the yachts safely anchored and secure represent the innocence of life, but eventually we must venture out into the real world just like the ferry heading for the huge dark waters.

By contrast, Amy’s understandings and perceptions change through discovering the value of her native and commits to learn the language which is a privilege she had previously denied her grandfather. This is shown when she uses a naïve tone “I don’t think my grandfather understood much English” at the beginning of the text but later her tone is full of a sense of regret and respects her grandfather when she confesses “I’d denied my grandfather the commonest of kindness”.

This new area of study will not only renew perceptions and create new understandings but these will also affect an individual on discovering new worlds and values. Through the nature of rediscovery individuals could be healing or spiritually cleansing. It could be something that was once forgotten. Robert Gray visually communicates his emotions and ideas using vividly detailed imagery in his poems. In the poem “Journey: The North Coast” Gray allows the readers to explore with him a journey where he rediscovers nostalgic memories of the past. He shares his observations, emotions and memories as images morph from one thing to another.” One of those bright crockery days” is an unusual metaphor and the term “crockery” is an odd adjective, perhaps reminiscent of his childhood days and it could be sort of way he remembers his past. Gray also uses colours and sensations that flash past such “dark creek” and “blackened” which contrasts dark and light. Additionally the visual imagery Gray uses throughout the poem helps the readers visualise what he is experiencing even more.

Discoveries can be made through relationships. It can be a significant influence when the life of an individual is transforming. The experiences of discoveries can be confronting but can result in building a better self. An example of this is in the text “The Relatives of Learning my Language” when Amy Choi is a teenage girl who doesn’t know the importance of her native language because she lives in Australia. ”I didn’t see the point of speaking Chinese we lived in Australia” supports this. “Discover my roots” is also another quote where Amy denies her native language. However she is confronted with the death of her grandfather the realisation of her thoughtlessness is acknowledged and she sees the advantages of knowing her native language.

The connection with her and her grandfather started with being distant but through their relationship and the death of her grandfather the discovery is made. Robert Gray also uses his relationships with the nature which helps to convey the concept of discovery. An example of this can be shown in “Journey: The North Coast” when Gray triggers his memories while travelling on a train. His relationship with the Australian landscapes, admiring the nature outside his window helps reflect his past. The beauty Discoveries can be made through the relationships, can help create new understandings and renewed perceptions and can also rediscover something that was once lost or forgotten. All these three texts “Late Ferry”, “Journey: The North Coast” by Robert Gray and “The Relative Advantages of Learning My Language” by Amy Choi underline these concepts. Therefore having this new area of study many of you students will be able to relate to it easily. 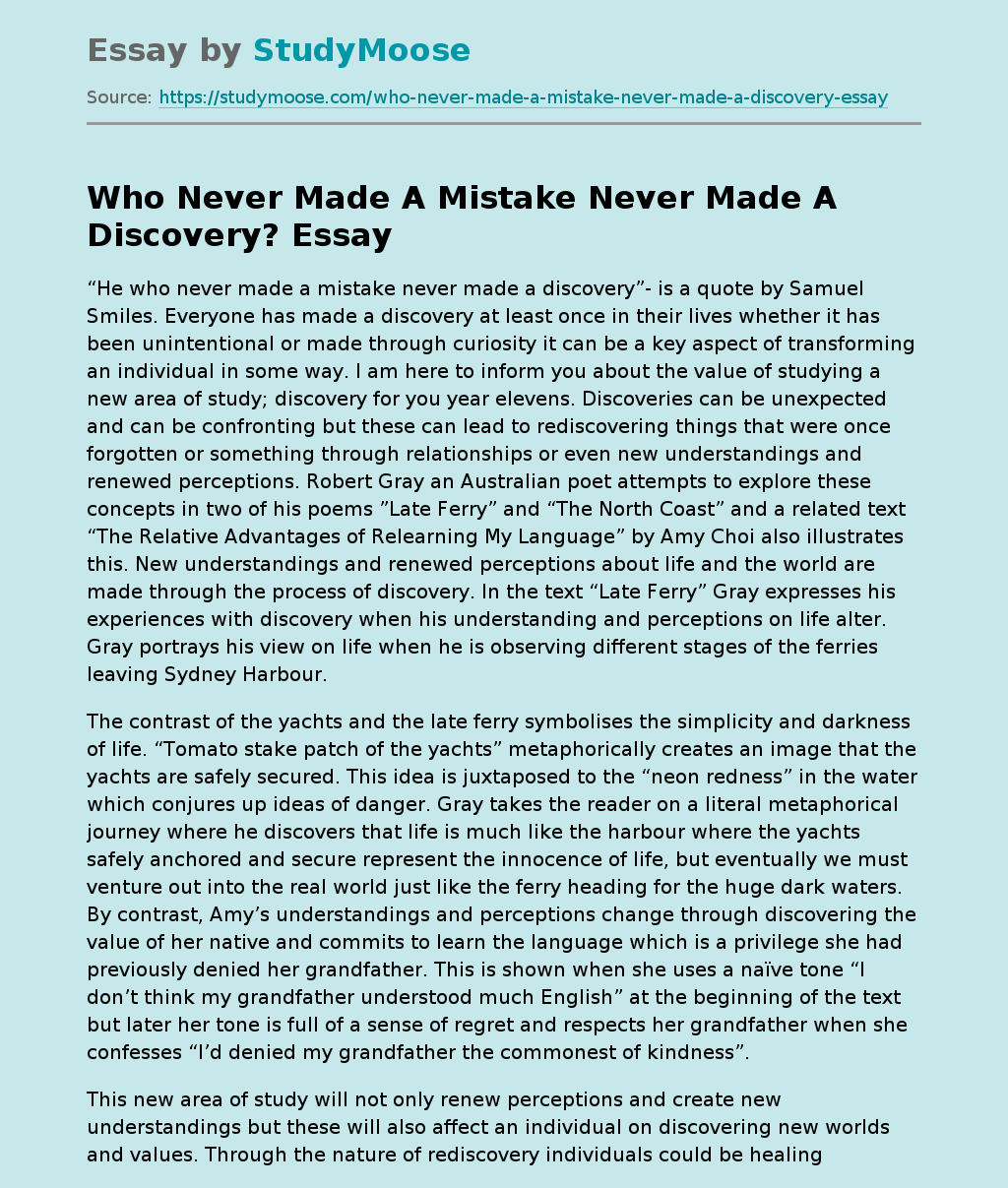