Romeo and Juliet by William Shakespeare

I think Romeo is too hasty and quick on his actions, because he is always running around as if everything were an emergency.

Don't use plagiarized sources.
Get Your Custom Essay on Who Is to Blame for the Deaths of Romeo and Juliet Just from $13,9/Page

An example is when he says, “O let us hence, I stand on sudden haste”. This shows that he is too quick and running around looking for Friar Lawrence to tell him something in a hurry. I think that he has to calm down and not be so hasty and plan things instead of being so sudden.

Romeo again is fickle and is speedy when he sees Juliet for the first time and falls in love with her.

Romeo fell in love with Juliet almost immediately and he didn’t even think to get to know her better first.

“For I ne’er saw true beauty till this night.”
I’d say his love for Juliet is true love because he forgot about Rosaline and now he has moved on so quickly seeing Juliet and has fallen in love with her, but he doesn’t know that Juliet is Romeos’ family’s worst enemy. Romeo says almost the same thing to Rosaline,

“One fairer than my love! The all-seeing sun,
Ne’er saw her match since first the world begun.”

Another action showing how Romeo reacts is when he asks Juliet to marry him after knowing Juliet for just 1 day after the party. Romeo arranges the marriage, and gets the nurse involved with the marriage too. This is clearly shown when Romeo walks off the stage as he was struggling to get down the wall of Juliet and says, “By the hour of nine.”

Here Romeo is arranging the marriage at nine ‘o’ clock in the morning while
struggling to get down. Once they’re married, Romeo and Juliet should know that it would lead to more feuds in the two families, the Montague and the Capulet family. They already knew that the families disagreed but they went ahead, disobeying their families.

Another place to show Romeo’s attitude is when he kills Tybalt for killing Mercutio, his attitude here increases rapidly and he gets really angry and stabs Tybalt. His anger is shown when he says angrily

“And fire-eyed fury be my conduct now!”

Here he is extremely angry and should control his attitude and he should think about what to do, instead of acting so quickly. Romeo killed Tybalt, because Tybalt killed Romeo’s best friend, Mercutio. I think anyone would’ve been a bit mad and want to get revenge but most people would think it through first. Romeo was too quick on his actions to killing Tybalt with his sword.

Friar Lawrence is also partly to blame for the deaths of Romeo and Juliet because he married them when he should have known that marrying them would bring tragedy and even more feuds in the future between the two families, Montague and Capulet. Friar Laurence should have understood that Romeo and Juliet were only young and they couldn’t think straight at the time. Others who are to blame is the Montague family, The Capulet family, also the Nurse and fate. The two families feuding made Romeo and Juliet want to run away or kill themselves.

Overall, I would say it is Romeo’s fault the most. It is understandable that their parents didn’t let them marry because of the grudge between the families. If their wasn’t this grudge, they wouldn’t have died but the parent’s didn’t know. Romeo on the other hand, should have known what would happen. Even when he saw Juliet pretending to be dead, he should have waited and called for help or friends instead of killing himself immediately.

Who Is to Blame for the Deaths of Romeo and Juliet. (2016, Mar 27). Retrieved from https://studymoose.com/who-is-to-blame-for-the-deaths-of-romeo-and-juliet-essay 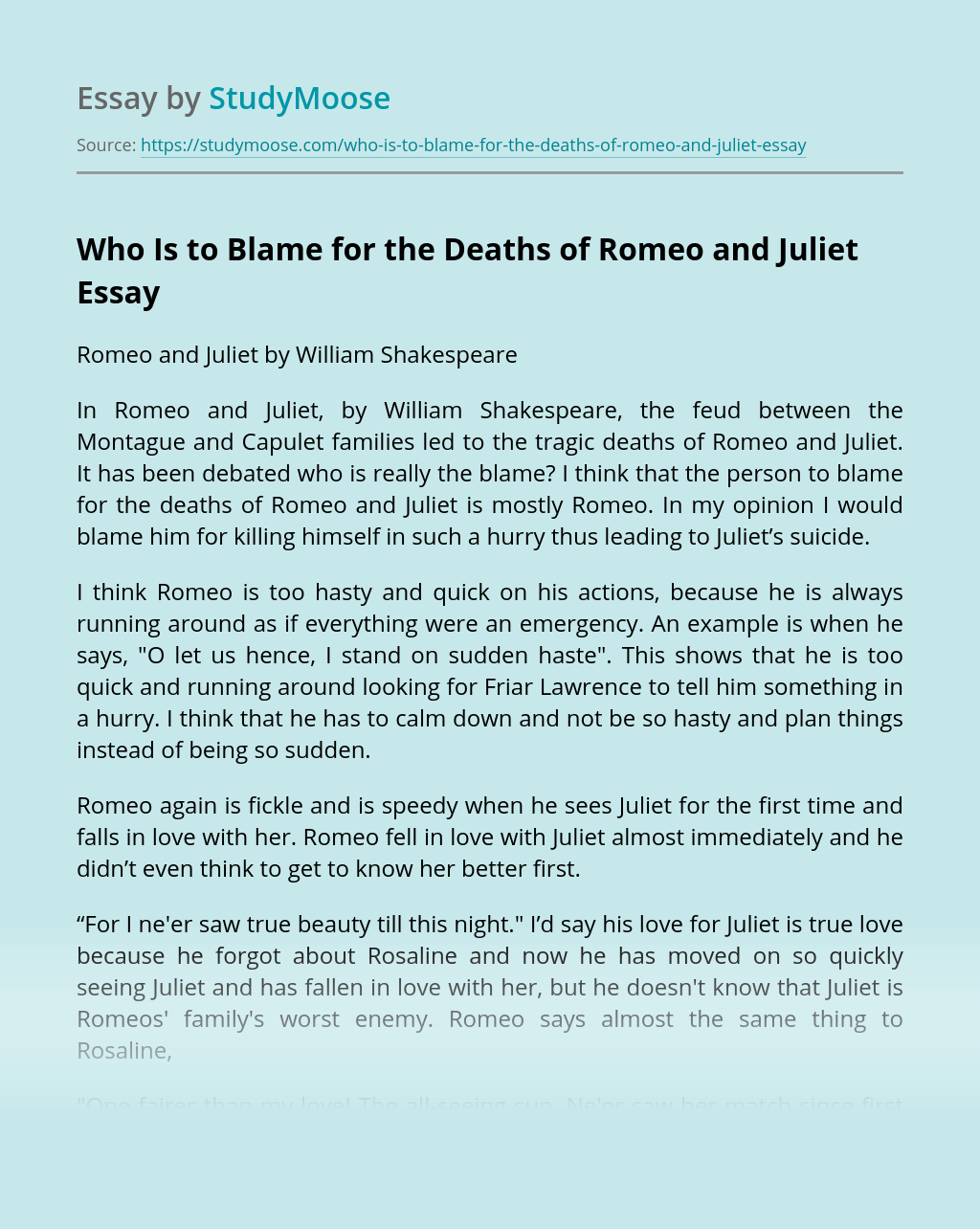 Death of a naturalist

In the poems presented, the main theme of parent and child relationships can be clearly illustrated. For example, Catrin which is composed by Gillian Clarke emphasises the theme of how powerful the bond is between parents and children. This point can be clearly addressed as Clarke provides the perfect metaphor ‘Red rope of love which... VIEW ESSAY

Ernest Hemingway wrote about death in many of his short stories. He often suffered from bouts of melancholy and his depression made a strong impact on his literary works. Many of Hemingway’s short stories show a common theme: that of someone waiting for death. “It is man’s attitudes toward life in the presence of death... VIEW ESSAY

Death of a Salesman was first performed in 1949 and was seen to be a powerful and moving piece of drama. I will now be going through the appeal and the impact of the play. First of all, the book of Death of a Salesman can be said to be a universal book, in the... VIEW ESSAY

1. What is liver mortis? How might this reveal information about the time of death? Liver mortis is one sign of death that occurs when blood settles in the lower parts of the body. The part where the blood accumaltes can be discolored or turn a purple color after a certain time and reaches its... VIEW ESSAY

In today’s society, war is often perceived as glorious and mighty. Many movies leave out scenes of young soldiers throwing their lives away and thousands of people dying systematically in unheroic deaths. The poems, “The Death of the Ball Turret Gunner” and “Dulce et Decorum est” attempt to touch on the issues of war. In... VIEW ESSAY