White Paper on Goverrnment Nepotism in the Philippines

This paper was made to dercribe how nepotism affects the lives of others particularly in the Republic of the Philippines and to call attention to whom might be able to address issues with regards to nepotism. The author hopes that this paper would serve as a usefull infomation to the readers as the paper named few issues affecting the current political situation of the government of the Philippines. Also, some aspects are viewed as to relate the issue to the major topic of the paper.

Don't use plagiarized sources.
Get Your Custom Essay on White Paper on Goverrnment Nepotism in the Philippines Just from $13,9/Page

The very perpose of the paper is to site some recommendation as for the problem to be solve and to serve as an eye opener to the people who would be reading the paper. The author used some references to elaborately describe the main topic of this paper. Introduction

Corruption has been widely spread to almost every where in the country, from the very small unit of each region up to the major government institutions of the country. Corruption has different faces and means such as bribery, extortion, cronyism, nepotism, patronage, graft, and embezzlement. Nepotism as one of the means of corruption has been affecting the lives of each and every Filipinos for decades or so. So long as it can be observed to almost every single company or organization and commonly in the local as well as national government sectors of the country. The origin of the term “nepotism” comes from Catholic bishops who would bequeath wealth, property, and priesthood to their “nephews?”

The nephews were usually their illegitimate offspring, and it served as a way for church clergy to both own property and to retain power in their families. Today, nepotism refers to the hiring or promotion of a family member (including in-laws), and it smacks of favoritism. In a family-owned businesses, nepotism is often viewed as natural and expected. (Riggio, October 2012). Nepotism all over the country is allegedly involves politicians of both local and national government organizations. Although there are provisions of laws governing nepotism, it is still undeniably imposible to end such unethical practice. As in the case of Maritime Industry Authority (Marina). MARINA has jurisdiction over the development, promotion and regulation of all enterprises engaged in the business of designing, constructing, manufacturing, acquiring, operating, supplying, repairing, and/or maintaining vessels, or component parts thereof, of managing and/or operating shipping lines, shipyards, dry-docks, marine railways, marine repair ships, shipping and freight forwarding agencies and similar enterprises, (Wikipedia).

Just recently, a case was filed in Malacanang against Marina deputy administrator for operations Gloria Banas for alleged nepotism for allegedly appointing her brother and sister-in-law to key positions in the agency. The case was filed by Mr. Nelson Ramirez of the United Filipino Seafarers. Gloria Banas was appointed by President Benigno Aquino as chairperson of the Personnel Selection Board of Marina. According to Presidential Communications Secretary Sonny Coloma, Banas should explain why her brother, Engr. Rizal Victoria, has been appointed as the chief/officer-in-charge of the Maritime Safety Audit Office and his wife, Melinda Victoria, as her executive secretary. (ABS-CBN.com) Problems/Issues

Conflict of interest, misuse of office, preferential treatment, and patronage are some of the government ethical issues associated to nepotism. Nepotism diminishes public trust by making government look like a family business run not for the country’s citizens, but for the families in power particularly those of government officials of both local and national government institutions such in the case of Marina versus Gloria Banas. According to the complainant Nelson Ramirez of the United Filipino Seafarers, the group will hold a massive protest if Banas is not dismissed from work. According to the reports from DZMM of Ria de Fiesta, ABS-CBNnews.com, they tried to call Banas’ mobile number for about 46 times on Sunday (Jan. 26) to get her side but she did not answer their calls.

Gloria Banas, being silent for the moment exercises her right and is legal. But given the pressure at the current situation, Banas should explain her side immediately as she could, for negative or undesirable comments and woes would surely air against her. And as soon as she could remember, people will view her guilty of such allegation. Banas should prove that her action with regards to the appointment of her brother in law together with its wife is base on the standard qualification of the agency and is not base on the so called “strong kinship ties”. Situation Analysis

As defined by the business dictionary, nepotism is the practice of appointing relatives and friends in one’s organization to positions for which outsiders might be better qualified. Therefore the very reason of keeping others like ethnic and racial groups out of the local and national government organizations which has contributed to the increasing rate of unemployed individuals in the Philippines. Nepotism is also the very reason why most of ordinary Filipinos prefer to work abroad because they know for a fact that there is a little chance for them to get hired within their own country especially when they have not graduated in college. Everyone is affected of such unfair practice and it happens everytime as in the case of Marina versus Gloria Banas. In a statement of former Jovito Salonga on March 2001, he then asked Gloria Macapagal-Arroyo, president of the Philippines during that time to put an end to the creation of political dynasties. Political dynasties are an extension of nepotism.

The primary difference is that nepotism is the appointment of relatives to positions to the same line of descent. Political dynasties refer to an elected official who chooses his wife or son to succeed him or to occupy the top political positions in his district or province, (Roces, March 2001). That was about thirteen years ago, yet, until now nepotism is still into common practice among local and national government officials. Therefore, continually lessens the opportunity for those who are more dignified and qualified for a vacant government position. Educational achievements of an ordinary people who wanted to serve the country with honesty and have a belief that the country can still survive to such unethical practice wrapping around the Philippine government is of no use because of such government nepotism. Resulting to the unstoppable increasing cases of corruption in the country risking the opportunity of the whole country to become stable in terms of economic capacity, thus, depriving a better life among its citizens. Recommendations

In light of the increasing cases of corruption in the country together with its means, as to the nepotism case filed against Marina executive Gloria Banas, President Benigno Aquino should address the issue seriously and should start to put up an end to such unethical practice. Although nepotism in the government is culturally acceped and even expected, the laws governing such practice should be strenghten. Also, the Civil Service Commission should continually monitor and remind public officials to strictly observe the rule on nepotism. According to CSC Chair Francisco T. Duque III, “Nepotism is a form of corruption that weakens morale and productivity in the public sector, promotes patronage politics, and breeds public distrust on government.

Any nepotism act or circumvention of the law should be brought to light so that such abuse of power will be stopped.” The author strongly believes that the root cause of such uneven practice is at the very responsibility of each and every Filipino citizen. Nepotism continues because voters are lazy. They don’t usually pay attention to politics until Election Day. When they get into the voting booth, they vote for a familiar name or they vote someone only because he or she is famous. People should learn to vote someone base on its capabilities and sincerity to serve the country and not because of patronage. Conclusion

Although nepotism is prohibited by government regulations, because it is not democratic and results in an uneven practice that blocks opportunity for others and depriving positive changes in the country , yet, the practice is still culturally acceped and even expected. The author believes that through exercising the above recommendations, cases of nepotism could be decreased. Also, the author believes that the best way to put a stop to the practice is to cast out from office all those who were elected into office in disobedience of the constitutional ban every major election, and never allow any candidate to run for office particularly if he or she violates the constitutional ban. Particularly, each and everyone should study or analyze carefully a political candidate before electing him. Each of us should strive to be of an independent individual in finding a job so that everyone can be given the equal opportunity that each one of us deserves.

White Paper on Goverrnment Nepotism in the Philippines. (2016, Apr 01). Retrieved from https://studymoose.com/white-paper-on-goverrnment-nepotism-in-the-philippines-essay 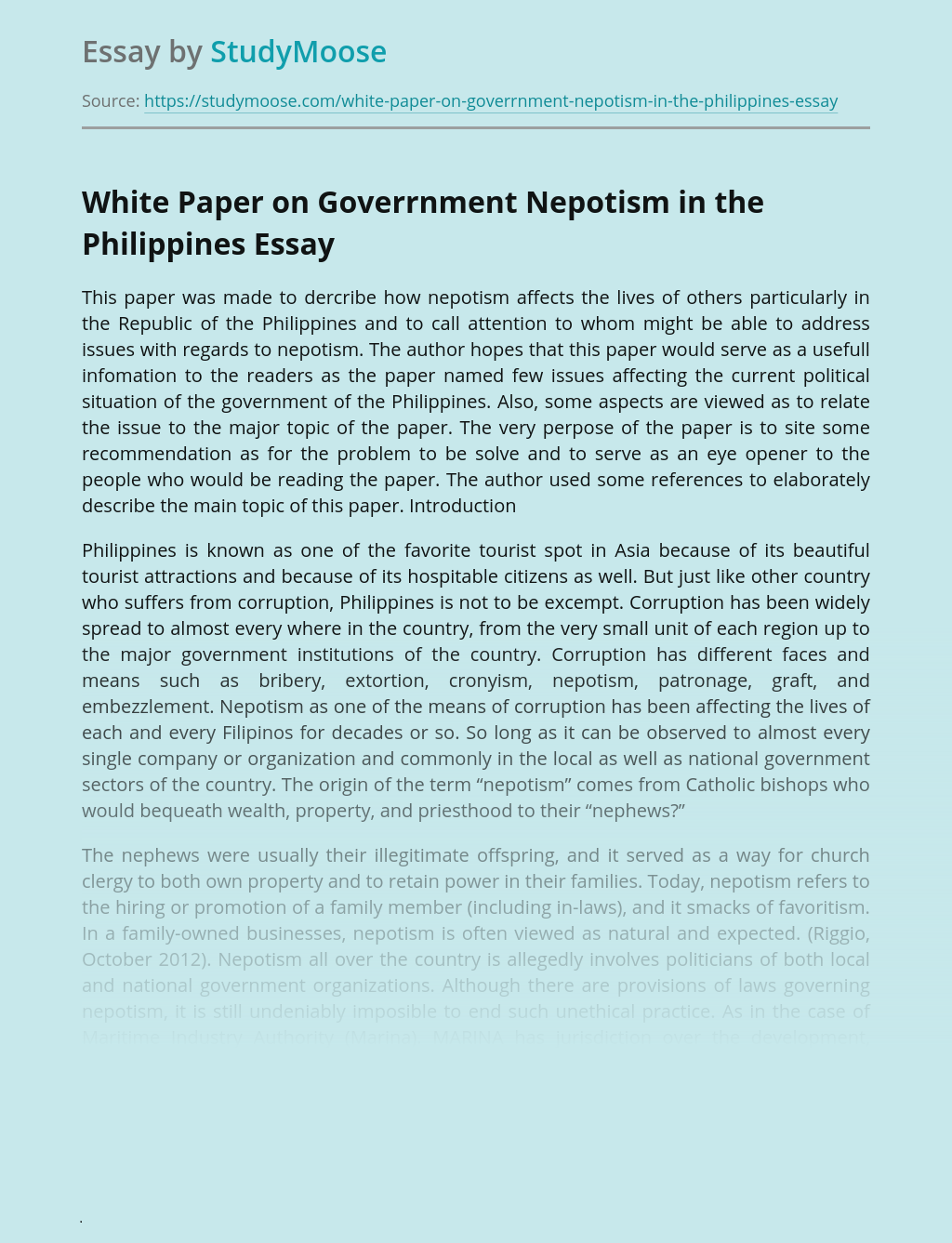 Federalism and the separation of powers mean that there are numerous elections at different levels of government and for different offices as well as primaries and direct democracy. Americans vote ‘for the president to the local dog catcher’ in 80,000 units of government, leading to ‘permanent’ campaigns and ‘bed-sheet ballots’, leading to a sense of...

Overview The term “social studies” usually designates the introductory and intermediate level of social science education at the elementary and secondary school levels. However, it also encompasses a good amount of specialized knowledge drawn from fields of study that are usually found in post-secondary instruction, such as economics, political science, sociology and anthropology. The goals...

Get Essay
Presidential Election of 1912

The election of 1912 followed a “great victory” for Theodore Roosevelt (1901-1908) and a “drastic failure” for William Howard Taft (1908-1912), as seen through the eyes of the public. Both presidents represented the Republican Party, but before the elections of 1912 Roosevelt separated, along with his progressive Republicans and insurgents, and formed a new political...

Disenfranchised felons ought to be reintegrated into society and recover their right to vote. Disenfranchisement is the harshest civil sanction enforced by a democratic society. Some of the issues involved with disenfranchisement consist of racism, inaccurate polls, and the huge quantity of individuals impacted. If the voice of the entire population does not consist of...

Anti-slavery individuals who believed that the government should grant western lands to settlers free of charge founded the Republican Party in the 1850’s. The first official meeting was held on July 6, 1854 in Jackson, Michigan. The republicans became a national party in 1856. Abraham Lincoln was the first republican president. A few credits to...