Which was more important reason for the outbreak of ww1 in 1914? -the arms race -the assassination in Sarajevo

Which was more important reason for the outbreak of ww1 in 1914? -the arms race
-the assassination in Sarajevo

Don't use plagiarized sources. Get your custom essay on
“ Which was more important reason for the outbreak of ww1 in 1914? -the arms race -the assassination in Sarajevo ”
Get custom paper
NEW! smart matching with writer

In Germany they had the biggest army, and it was the best trained and most powerful out of all armies involved in World War One. However Britain, being completely surrounded by water, had large powerful navy helped to keep the empire safe. On June 28th, 1914, a nationalist organization called the Black Hand assassinated Archduke Franz Ferdinand in an attempt due to demands for Serbian independence.

The Black Hand wanted all Serbs to live together so were annoyed at Austria-Hungary for taking over Bosnia.

The Arms race could had led to war because Germany and Britain weren’t concentrating on building up their armies as they were competing with each other to see who could build the most dreadnoughts. However the rest of the countries though were competing to have the biggest army so they all became very competitive and wanted to win, this means that they all hated each other while just concentrating on having a bigger army that could overpower the others. Russia won the arms race as a single country as it developed there army the quickest but combined the triple entente won the arms race.

In conclusion the all became competitive trying to be better than one another and this could have led to war. Nevertheless the assassination in Sarajevo was also a long term cause leading to ww1 as Serbia was very annoyed because in 1908 Austria-Hungary took over Bosnia which forces Serbia to back down in the Bosnian crises.

So Serbia thought the way to get back at them was by assassinating the Archduke Franz Ferdinand during his visit with his wife to Sarajevo, many attempted but it wasn’t until by luck Princip a member of the gang was in the right place at the right time and shot the Archduke and his wife Sophie killing them both. This could have led to a war because it cause great hostility between the alliance system as Russia intervened to help the Serbs, Germany joined in alongside Austria-Hungary, and France and Britain were brought in because of an alliance with Russia. To conclude my opinion is that the one which was most important as a cause for world war 1 is the assassination in Sarajevo because it means that the alliance system is stronger than ever and there is great hatred between the two because of the assassination so now Russia who stepped in to help the Serbs want to get back at Austria-Hungary which turns Britain and France against Austria-Hungary and Germany as well because they have to support Russia because they are in an alliance with them.

Which was more important reason for the outbreak of ww1 in 1914? -the arms race -the assassination in Sarajevo. (2016, Apr 16). Retrieved from https://studymoose.com/which-was-more-important-reason-for-the-outbreak-of-ww1-in-1914-the-arms-race-the-assassination-in-sarajevo-essay 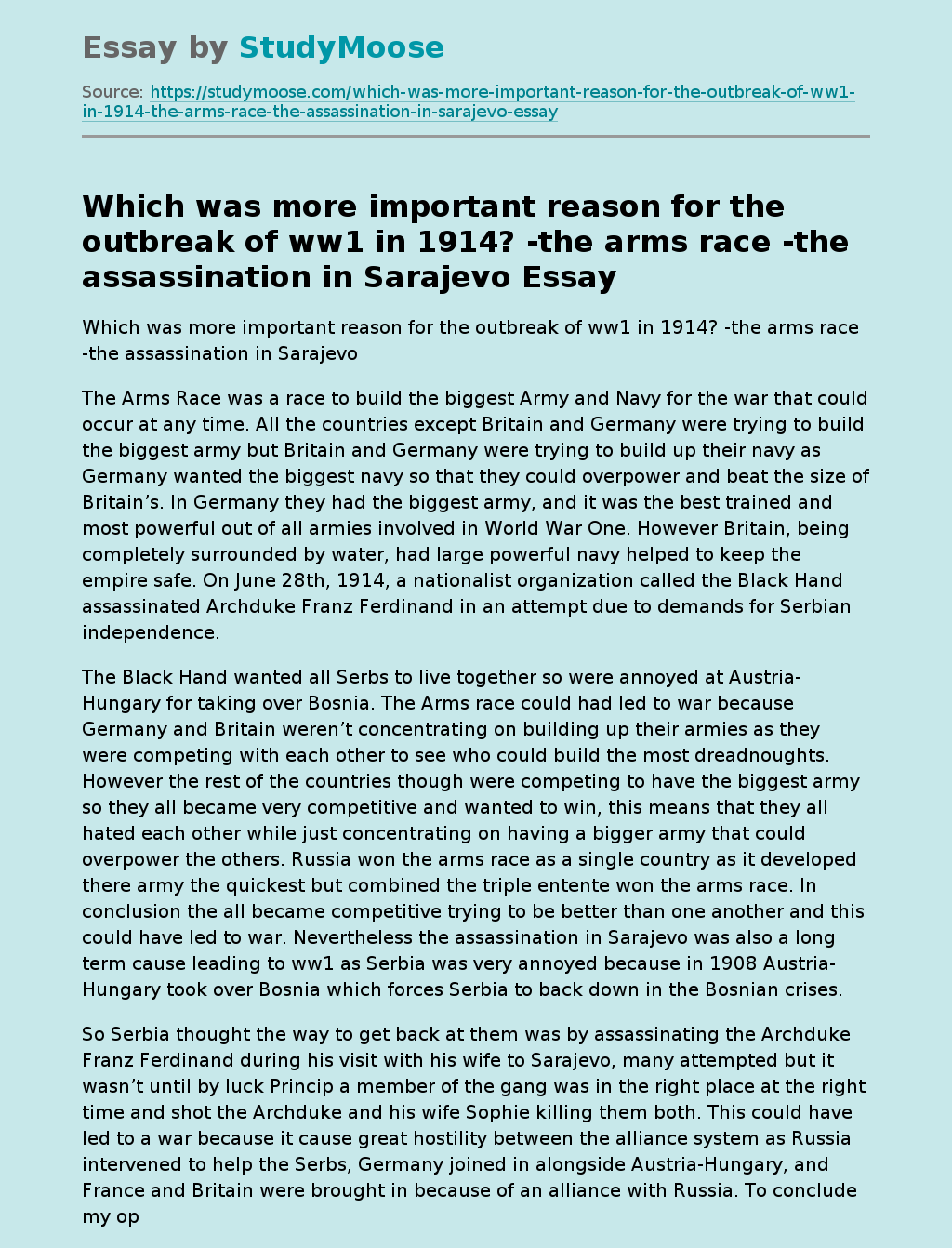