"Where Lies the Land?" by Arthur Hugh Clough Essay

This poem is considered to be one of the most optimistic poems the reader can ever meet. The speaker here is cheerful and positive , a person who is looking at the positive side in life. Using this image of infinite sea and a ship which is in the middle of this sea is simply a direct image that resembles life and how man is like a sailor who is trying to steer the rudder of his life smoothly and effectively no matter what hardships or obstacles (icebergs) he might meet.

Don't use plagiarized sources.
Get Your Custom Essay on “Where Lies the Land?” by Arthur Hugh Clough Just from $13,9/Page

The poem opens with number of rhetorical questions that sets the scene and enables the reader to visualise it “Where lies the land to which the ship would go?” This question surprises the reader and ironically fools the reader into thinking that the speaker is a lost person who is looking for his targeted destination . “Far, far ahead”, in fact the effectiveness of this image lies in the fact that it represents man’s life .

Man here became like this ship whose life lies ahead of him . The use of “far” twice reflects the length of this journey which seems to any person as endless one. The speaker poses another question that reflects his preplexity “and where the land she travels from? Away, Far, far behind, is all that they can say” ,here the persona is actually uncertain where he came from and where he is heading to.However, the questions is not the place of landing ,but how he is going to land. The path is what matters not the mean. Nevertheless, despite the great confusion and uncertainity the reader feels through the speaker’s tone, yet the objectivity and enthusiasim is apparent here.

The speaker in the second stanza moves into describing a sunny day, quite peaceful and calm. A typical morning that emerges in the reader’s mind a marvelloues picture “On sunny noons upon the deck’s smooth face” The speaker here seems to be quite romantic giving aurual image of loving couples move “arm,in arm” ,a pleasant ,almost inspiring image .the use of “w” sound ,this soft, smooth sound reflects the speaker’s extreme optimisim and openness to life. It stimulates our emotions and draw a romantic picture.

This stanza emerges in our mind a more profound meaning that has to do with our lives. This picture of a sunny day, portrays man’s life when it moves smoothly and easily without problems or adversities. This image reminds the reader of his own life and inspires him with hope and expectations that boost him to survive and carry on.

The third stanza is considered as somewhat paradoxical in the senses that it depicts an extremely opposite situation in life, which is “adversity” .The speaker opens it with “On stormy nights when wild north-wester rave” , the emphasis here is on man’s life when it meets with sea breakers and obstacles. Storm here refers to the problems and troubles that might meet any person in the course of his life and hinders him from enjoying his days. Sometimes such tribulations shatter his dreams and destroy his hopes, yet man should be strongwilled and determined in order to face such evils.

The speaker here is giving us a moral lesson, he is rather encouraging asks us to be like seamen who never falter or give up when they meet a strom, on the contrary, they standstill and face it “how proud a thing to fight with wind and wave” , The tone here is hopeful, encouraging one that pushes the reader’s guts . patience and endurance is praised here and appreciated. The speaker believes that man’s strength is shown in troubles ,he believes in the saying “what doesn’t break you, strengthen you” and this is what he tries to teach to the readers.

Ending his poem using this refrain, is another element that adds to the marvellousness of the poem’s theme. It serves as a mean of conveying man’s life. The poet starts his poem with great uncertainty concerning his destination, that’s why he ended in the same aspect because he is still puzzled, yet hopeful.

The use of rhyming couplets contributes to the poem’s general effect and reflects the joyful mood that the speaker has established through his optimistic, jolly words. The use of slow pace and soft rhythm maintains the same purpose and gives a graphic simulation of the actual scene (a ship sailing in a vast ocean).

As for the persona, we have to admit that the poet succeeded in depicting an excuiste persona who is full of life and enthusiasim, a strong person who could not be easily defeated. A real survivor.

"Where Lies the Land?" by Arthur Hugh Clough. (2016, Jul 05). Retrieved from https://studymoose.com/where-lies-the-land-by-arthur-hugh-clough-essay 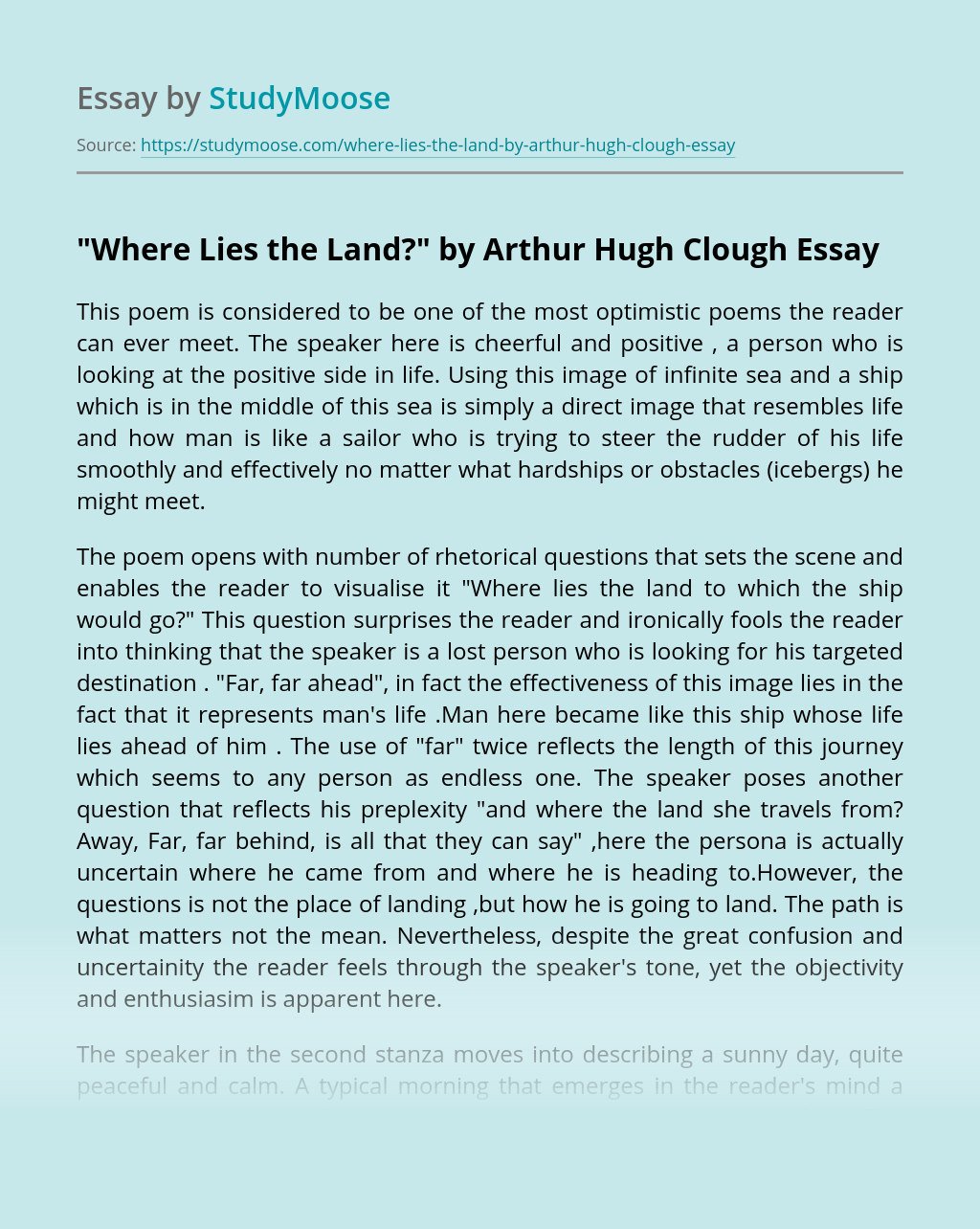 In taking the online quiz required for this assignment I found myself to be a participative leader. This type of leader fits me perfectly and I was not surprised to see the answer. I try to engage each team member in identifying necessary goals and developing procedures or strategies for reaching those goals . Nursing... VIEW ESSAY

Elia Kazan’s film On the Waterfront and Arthur Miller’s play The Crucible tell similar stories. In the movie, On the Waterfront, a waterfront worker named Terry Malloy aids in the killing of one of his co-employees, Joey Doyle. In the beginning of the movie, we see that Terry’s conscience is beginning to bother him. Edie,... VIEW ESSAY

Socrates once said, “As for me, all I know is that I know nothing. ” Several philosophers contradicted Socrates’ outlook and believed that true knowledge was in fact attainable. This epistemological view however had several stances to it, as philosophers held different beliefs in regards to the derivation of true knowledge. Rationalists believed that the... VIEW ESSAY

CHAPTER 1 Background of the Study A plant can only have 12 hours of sunlight or less and for some plants this is too much or too short. Light is the main source of plants for food production, and also for the growth of a plant. It is needed by a plant in order to... VIEW ESSAY