When you were a child, have you ever hated a person by accident without a good reason? That sounds ridiculous but it would be the unforgettable memory during anyone’s childhood. I have read a story, the story is about the psychological development of a 5-year-old boy, and he hates his own father. However, the plot of this work is extremely lovely and not “scared” at all. That’s My Oedipus Complex of the author Frank O’Connor.

My Oedipus Complex written by Frank O’Connor is a story about a little boy, Larry.

Don't use plagiarized sources. Get your custom essay on
“ When you were a child have you ever hated a person by ”
Get custom paper
NEW! smart matching with writer

The whole work told about his relationship and his complicated feelings around the relationship in family. In the story, the main character is a five-year-old boy. The narrator claimed to be “I”. Under the eyes of the boy, everything was getting more interesting. Through that, Larry’s character was clearly described. His complex psychological developments made the readers funny were that he loved the person take care him and he fight against the person take place him in his mother’s love and attention.

The boy was too young to realize the brutality of war. He did not know the importance of the father in the family, either. The memory about his father was very little; he found that his father was like Santa Claus. In the story, the main character told that father “came and went mysteriously”. Under the eyes of a boy with the pure soul, readers may smile in the first moment reading but after that they would be sympathy with the boy’s situation.

Living in war conditions, only the boy and his mother lived at home, Larry became his mother’s companion in daily life. “What mother and I should be during the day” and “what steps should be taken to brighten the home”. This boy was also an imaginative child when naming both his left and right legs, called “Mrs. Right” and “Mrs. Left”. Children always have very difficult actions, Larry is no exception. If girls like to talk to dolls, Harry saw his left leg, his right leg as the friends. Larry knew how to create conversations between Mrs. Right and Mrs. Left is very smart and interesting, that made him different from normal children.

Harry’s childish personality was shown clearly when he compared the Geneys’ baby to a cheap baby. In his mind, mother could completely give birth to a baby by herself. The boy was carefree and innocent when describing the surroundings so friendly. He compared himself to the sun, ‘like the sun, ready to illumine and rejoice”. This comparison in some extensions helped the readers recognize his optimism. In a day, all things that he did such as waking up, going to his mother’s room, having breakfast and going with his mother but he also spent some time to enjoy nature through the window.

Larry’s life was disturbed when the father returned home, the boy had some changes that caused complicated emotions. The boy was jealous when his mother talked to his father much more and only saw him as a boring guest. He said that he did not like to see her worried face. The boy always interrupted his mother and father and made his father to get angry. The boy explained: “It was clear that she either genuinely liked taking to father coal talking to me, or else that he had some trouble on her which made her afraid to admit truth.” Sometimes, he also thought that God misunderstood his prayers. He always wanted his mother to belong to him just like before his father came back. He told that he felt uncomfortable when he saw his mother took care of his father. He wanted a peaceful time with his mother again and wished God to send his father back to the war. Larry’s selfish and stubbornness is getting bigger and bigger. He called his parents that couple: “The way that pair went on smothering my early – morning schemes were like burying a family from the cradle”. He shouted with his mother. He bawled with his father: “Shut up, you” and “Snack your own”. He made himself be a bad boy. It’s difficult to imagine that it was the action of a 5-year-old boy.

Larry thought that ‘It seemed to depend on being grown – up and giving people rings, and I realized I’d have to wait”. The boy also said to his mother ‘I’m going to married you”. He couldn’t have awareness about what he said; he only thought simply that that way he could win mother’s love. Larry, a little boy, likes Oedipus – a character in an old Greek legend who killed a man without knowing that the man was his father and married the man’s wife without knowing that she was his mother.

The story was funnier when Larry’s family had a baby, Sony. Larry was still selfish and continuous jealous with his younger brother. The event made him very happy is that when his father was kicked out the big bed and Larry tolerate with him. He said ‘There! There!” to comfort the father. This action express Larry’s grow-up, he also tolerated with his father.

In general, Larry was an emotionally rich child and he also had many confusing personalities. On the one hand, the boy was very active, sensitive, responsible and intelligent but on the other hand he was selfish, stubborn and jealous. In particular, the childish personality is expressed in each sentence, each episode of the story. Through Larry character, the readers can understand more and more clearly about family relationships, the relationship between children and parents. The extension of the story also showed the readers the horrors of war. The war separated family members from each other, making them strange.

When you were a child have you ever hated a person by. (2019, Dec 11). Retrieved from https://studymoose.com/when-you-were-a-child-have-you-ever-hated-a-person-by-example-essay 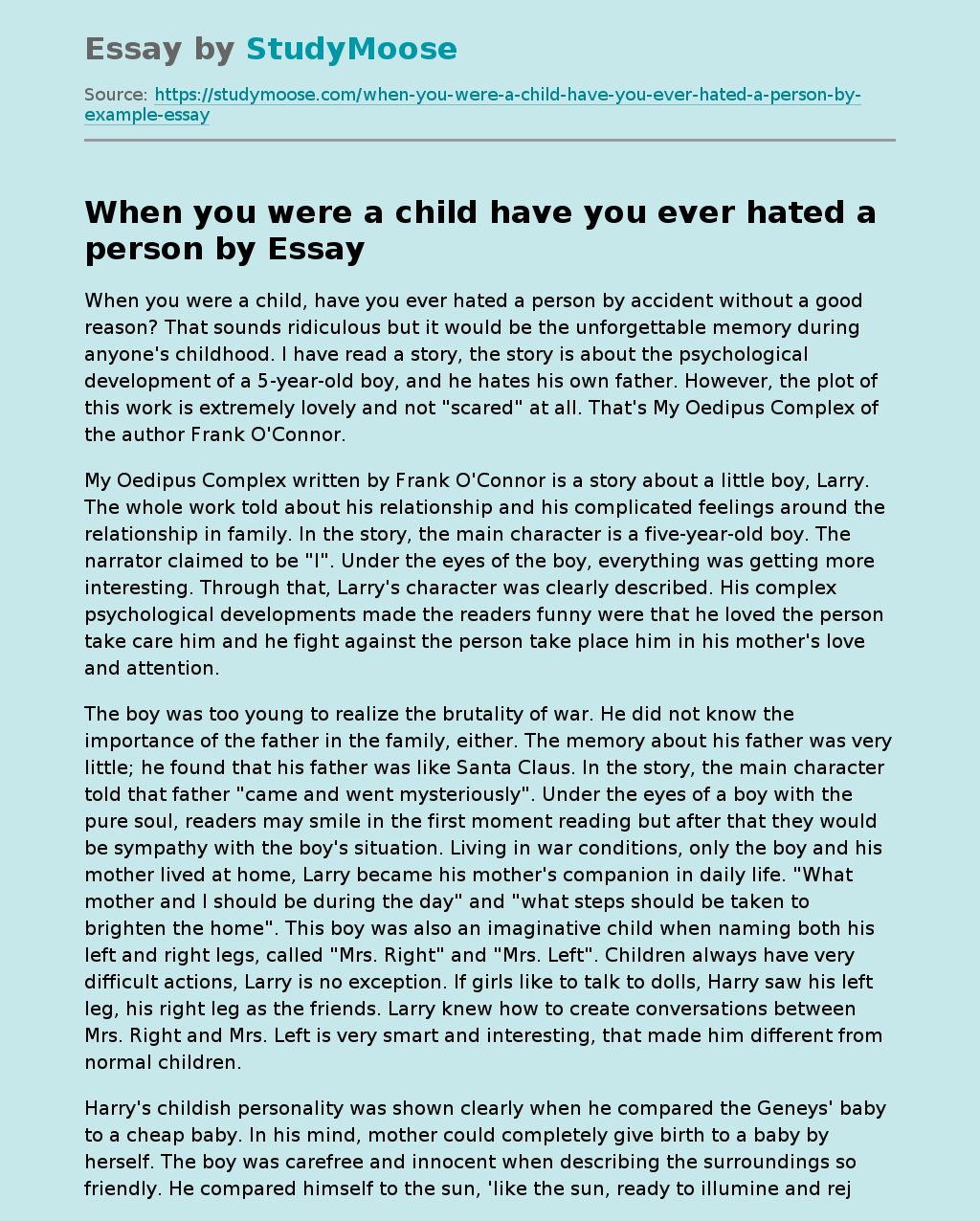