What Ways is 'As You Like It' a Typical Shakespearean Comedy?

That Jacques enjoys his melancholy is made abundantly clear. His banishment seems to have been made voluntarily, and he elects to prolong it. Every Man in his Humour introduced the ‘humorous’ character to the stage, the man with a dominant passion carried to the point of absurdity. There is something of this in Jaques, which Shakespeare created, and makes Jaques treat himself and be treated by others as someone who can be depended upon to respond to any situation in a unique and characteristic way, much like a clown but only more sober.

Don't use plagiarized sources. Get your custom essay on
“ What Ways is ‘As You Like It’ a Typical Shakespearean Comedy? ”
Get custom paper
NEW! smart matching with writer

He is, in his own way, as equally an incongruous figure as Touchstone in a pastoral.

The pair are complementary. Both are fish out of water in that they are satirists in a milieu proof against satire. In the eyes of the woodlanders Jaques is a bit of a fool, and he displays a bent for clowning before ever he asks for a motley coat. He is the very essence of sophistication, has experimented with everything and found nothing very good, and can import his sensitivity to the cruelty and injustice of mans’ world even into the world of nature.

But his shafts fall harmlessly off a company who are armoured in complete happiness.

Nobody bothers to contradict his cynical Seven Ages of Man speech; the whole atmosphere of the place contradicts it. Only in the forest of Arden is his cynicism made to look ridiculous; in the court it would be a different matter. Were Jaques the cheap and selfish cynic he may appear to be, Arden would reject him, for it accepts only the good and true.

He breathes its air and enjoys it. He flowers there, as do all the other characters and the whole play, under Shakespeare’s manipulation. Because its atmosphere is highly permissive he is allowed his idiosyncrasies. After all, they do nobody ham.

They have an astringency, which the mood of the play softens by making him the object of affectionate laughter, and it is for this reason that Shakespeare has endeavoured to insert Jaques and develop him as a character. There are more songs in As You Like It than in any other play by Shakespeare. Many of them are provided my Amiens, who is a person in the play and not an anonymous singing-boy brought in for a special occasion. ‘Blow, blow, thou winter wind’ and Hymen’s choral song are used to fill the time while characters on the stage recount adventures already known to the audience.

‘What shall he have that killed the deer? ‘ passes the time between Orlando’s promise to return to Rosalind ‘at two o’clock’ and his failure to keep that promise. ‘Under the greenwood tree’ gives Jaques a chance to display himself in person, after the long account of him at second hand. ‘It was a lover and his lass’ suggests a time lapse before Rosalind’s revelations, promised for ‘to-morrow’. This is a play to which it was particularly important to impart a feeling of time passing and life going on, of the world wagging, rather than of violent happenings.

The songs evoke a carefree, merry mood and conjure up woodland on a bare stage. They are used in some instances to hint at evils and problems. Even ‘It was a lover and his lass’ has a hint of sadness in it, ‘how that life was but a flower’. Shakespeare used songs to a greater degree, however, to make any situation a slightly more comical one; to imply a lighter mood. The song, ‘What shall he have that killed the deer? ‘ in Act 4 Scene 2 mostly provides a cheerful choral interlude, with a broad joke at the expense of a cuckold’s horns.

Jaques shows not to be a spoilsport and quite forgets the slaughtered deer, openly falling with the mood of masculine joviality as, despite his affection of perversity, he falls in with the whole scheme of life in Arden. Those is why Shakespeare included many songs in As You Like It, in order to comically and gradually disarm his viewers into falling in line with the jovial atmosphere of the play. It is generally agreed that the masques in the late plays of Shakespeare are related to the masque form in the 17th Century.

But even early plays show a tendency to some form of formalism at the conclusion. Not obviously a masque, yet serving the same purpose, is the scene at the end of A Midsummer Night’s Dream, in which the fairies bless the sleeping house, and Puck into rhyming couplets, with ‘Now the hungry lion roars’. An extremely slight but telling instance of more than human power being called upon to achieve a comedy di?? nouement is the sudden appearance of the Abbess at the end of The Comedy of Errors. A riot of marrying and giving in marriage is the usual end of a Shakespearean comedy.

What is important from the view from the view of the masque ending is the tendency to present this with a certain formality, to give it a sacramental or symbolic value. To highlight the surprise features of the play, Shakespeare uses several moments of undeniable tension to which the audience knows that a happy outcome will ensue but nonetheless are gripped with the innate intuition of what comes next. Mixing the tension with surprise, the comic with the serious, the prose with the verse and the court with the country guarantees moments of an intensely comical aspect but also with slightly ominous undertones.

Duke Frederick’s taking Rosalind to one side and telling her that if she ‘so near our public court as twenty miles’ she’d die for it is one such instance, however this is the fomenter for the events that are to follow in the rest of the play and in doing so, Shakespeare has turned a potentially tragic scenario and used it as his basis for his play. Another scene where, in another play or plot would see impending fate but instead Shakespeare ensures that we have a happy outcome is when Adam, being faint after a long journey, complains to Orlando that he would die for food.

Orlando swears to bring victuals to the old, faithful servant, or die trying. The focal point of the scene is when, in Act 2 Scene 7, Orlando struts towards Duke Senior and his men and menacingly announces, ‘Forebear, and eat no more! … He dies that touches any of this fruit till I and my affairs are answered’. Whereas in a tragedy, such as Romeo and Juliet, we may expect a certain battle to result after such a portentous threat, Shakespeare instead affirms that this is a comedy and Duke Senior, un-offended, invites Orlando to sit down and join them.

Furthermore, the potentially fatal family grudge between the two brothers also ended, not in blood loss, but in love. Orlando, passing by on his way to woo Ganymede (Rosalind in disguise), had come upon his sleeping brother in mortal danger from a lurking lioness, and turned back to the rescue after turning away twice. ‘Kindness, nobler than even revenge, and nature, stronger than his just occasion, made him give battle to the lioness’. Orlando’s intervention had converted his brother’s hatred into love; the two were reconciled.

And in what seems further comical irony, Oliver declares his love for Aliena (Celia in disguise) and swore that Orlando could keep their father’s entire estate; he, Oliver, would now prefer to stay in the forest to ‘live and die a shepherd’! Such unlikely conversions for both brothers dispel the dark, menacing mood of the situation and instantly bring about joy and laughter. We see Shakespeare employ a scenario intertwined with danger, having various possible outcomes, from tragic to comic, and give the happiest outcome.

He uses such serious, dramatic moments to highlight the humorous, light-hearted ones and, in doing so, succeeds in making As You Like It a comedy. Disguise is an added impediment to an already tricky situation, which Shakespeare employs often to inject more humour into a moment and use dramatic irony and turn it comical. The main examples of disguise in As You Like It is Rosalind’s and Celia’s dressing as a page-boy and humble shepherdess respectively, a prudent attempt to feel a little safer in the forest.

This action, however seemingly insignificant at the time, gives way to a whole host of comical situations, which Shakespeare creates, and the audience feeds off. The love interest of Phebe for Rosalind, Oliver for Celia, and the continuous blindness of Orlando to recognise Ganymede as Rosalind serve as a running joke throughout the play. If we remember that in Shakespeare’s times, all the actors were male, then the result of a male actor dressing up as a female disguised as a male is an absurdly fantastical way of playing on the differences between men and women.

This humour of disguise works in two ways: one in that the audience, having knowledge of all goings on, may indeed laugh at all the ignorance and unawareness all the characters display towards a character in disguise. Another is that the characters, through Shakespeare and through the element of disguise, may mirror situations in real life where we find ourselves in a similar scenario of mistaken identity, along with all the confusion and commotion this brings.

The theme of a happy ending is fundamental for a romantic comedy, and it primarily involves mass marriages and plenty of song and merrymaking. A happy ending reassures the audience that ‘all’s well that end’s well’, and for a moment the audience is fully engrossed in the gaiety of the situation and forgets all the worries, dark points and serious elements of the play. It does not necessarily need to unravel all the mysteries, reveal all the secrets and solve all the problems, but the audience merely has to feel like it does through the festivities on the stage.

It must leave no immediate situations for the audience to worry about or consider, and must instead be purely and completely devoted to the intense joy the masque has brought about. Using a combination of comical elements (a jesting clown, songs, masques, tension, surprise, disguise, verbal/visual humour, and a happy ending), much like a cook uses a variety of ingredients and spices to flavour a good meal, Shakespeare has succeeded in making As You Like It a typical Shakespearean comedy.

What Ways is 'As You Like It' a Typical Shakespearean Comedy?. (2017, Aug 27). Retrieved from https://studymoose.com/what-ways-is-as-you-like-it-a-typical-shakespearean-comedy-essay 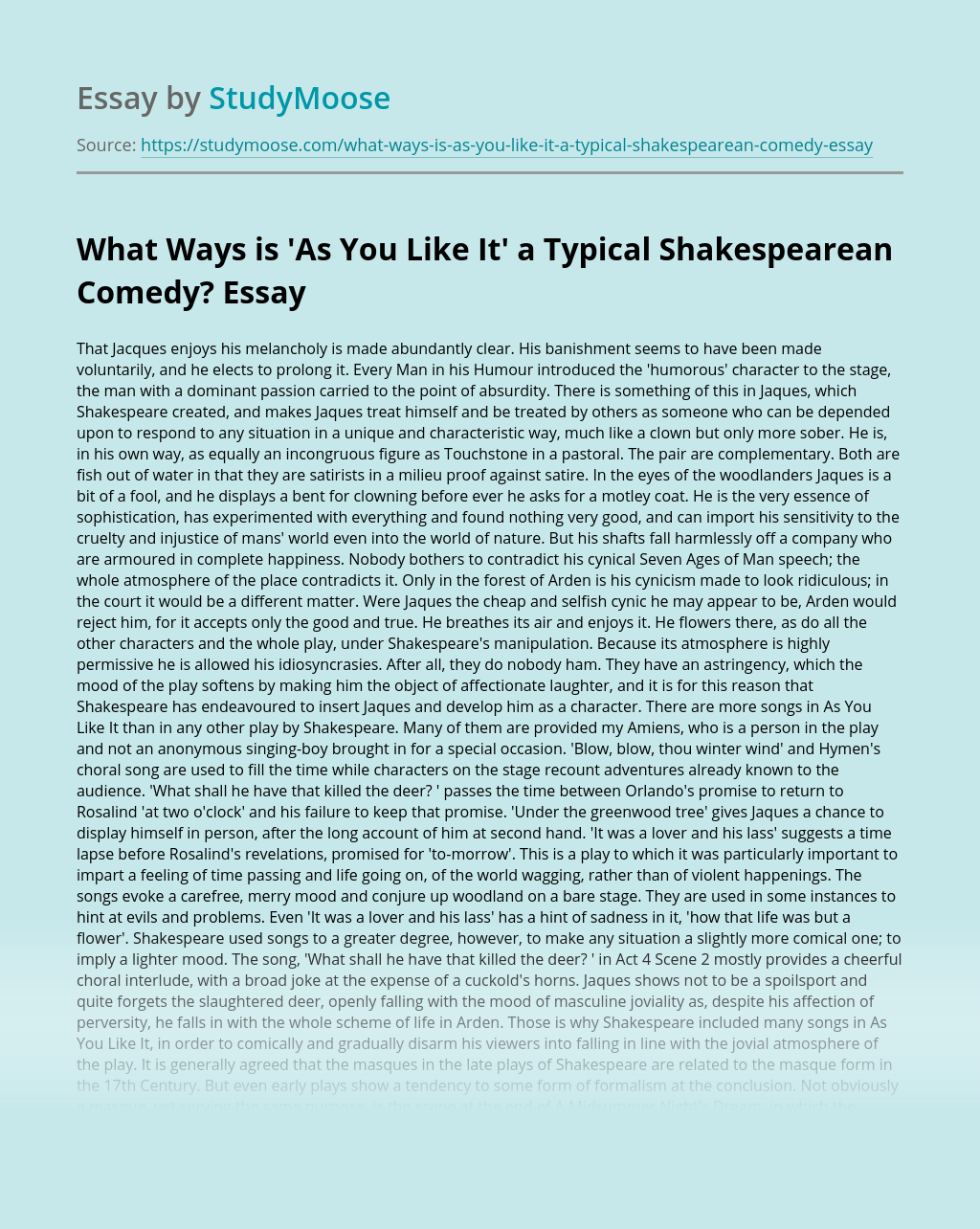