What problems faced the nation in the post Revolutionary period?

Following the Revolutionary War, many tribulations arose in the newly independent thirteen colonies. Problems such as disunity, slavery, foreign/interstate relations, land disputes, and national debt led to the formation of the Articles of Confederation in 1777. America’s first constitution, however, only lasted ten years until fifty-five delegates met in Philadelphia with the same common purpose: to preserve the American union, protect the American democracy from abroad, and curb the unrestrained social reformation rampant in other states.

Don't use plagiarized sources. Get your custom essay on
“ What problems faced the nation in the post Revolutionary period? ”
Get custom paper
NEW! smart matching with writer

Not only did Britain still refuse to repeal the Navigation Laws; goods formerly imported from England were cut off, forcing Americans to make their own. American industry was difficult, since British citizens flooded the country with cheap goods right after the war, continuing their chain of trading posts on the U.S. soil. But since America became independent, they had the opportunity to trade with foreign countries–any nation they wanted to! The list of possible nations ran short, for not many countries were willing to trade with the unpopular Americans.

Spain, still resentful for losing the French and Indian War, closed the Mississippi River to American commerce. The Spanish colonists even claimed a large area near the Gulf of Mexico, ignorant to the fact that the area was ceded to the U.S. by Britain.

Both Spain and England, while encouraging Native American tribes to be restless, prevented the U.S. from controlling even half of its territory. The French even demanded the repayment of money loaned during the war, regardless of their past-alliance with America.

Congress was unable to control foreign commerce nonetheless, and national debt was mounting as foreign credibility was slipping. Boundary disputes began erupting into small battles once states started to tax goods from other states. A major dispute aroused from the huge tracts of land west of the Alleghenies that were given to states such as New York and Virginia.

This land could be sold to pay off debts, and the other states were outraged that they were forced to tax themselves heavily to earn even a fourth of the amount the land was worth. This new spirit of “all men are created equal” even inspired ideas about the possibility of an abolition of slavery. In 1775, the Philadelphia Quakers founded the world’s first antislavery society, proving that the dispense of slavery was indeed possible, causing the country to dream of a utopian society.

The Articles of Confederation was finished in 1777, but was not completely ratified by all the colonies until 1781. Also known as America’s first constitution, the Articles had no executive branch and a pitifully weak Congress. After Britain abused their executive and judicial branches of government, Americans distrusted the power the two branches could once again hold. In addition, the Congress could not regulate commerce or enforce tax collection, nor could they demand money or draft soldiers from other states.

For example, a group of Pennsylvanian soldiers harassed the government in Philadelphia in 1783, demanding back pay. When it pleaded for help from the state, and didn’t receive any, the soldiers had to shamefully move to Princeton College in New Jersey. The legislative branch was given sweeping powers in most states, although some people, like Thomas Jefferson, warned that “173 despots [in legislation] would surely be as oppressive as one.”

In conclusion, many of the problems that faced the nation in the post Revolutionary period led up to the Articles of Confederation, however weak and uncooperative. But it was a model of what a loose confederation should be, and was a significant stepping-stone towards the establishment of the U.S. Constitution.

What problems faced the nation in the post Revolutionary period?. (2016, Jun 25). Retrieved from https://studymoose.com/what-problems-faced-the-nation-in-the-post-revolutionary-period-essay 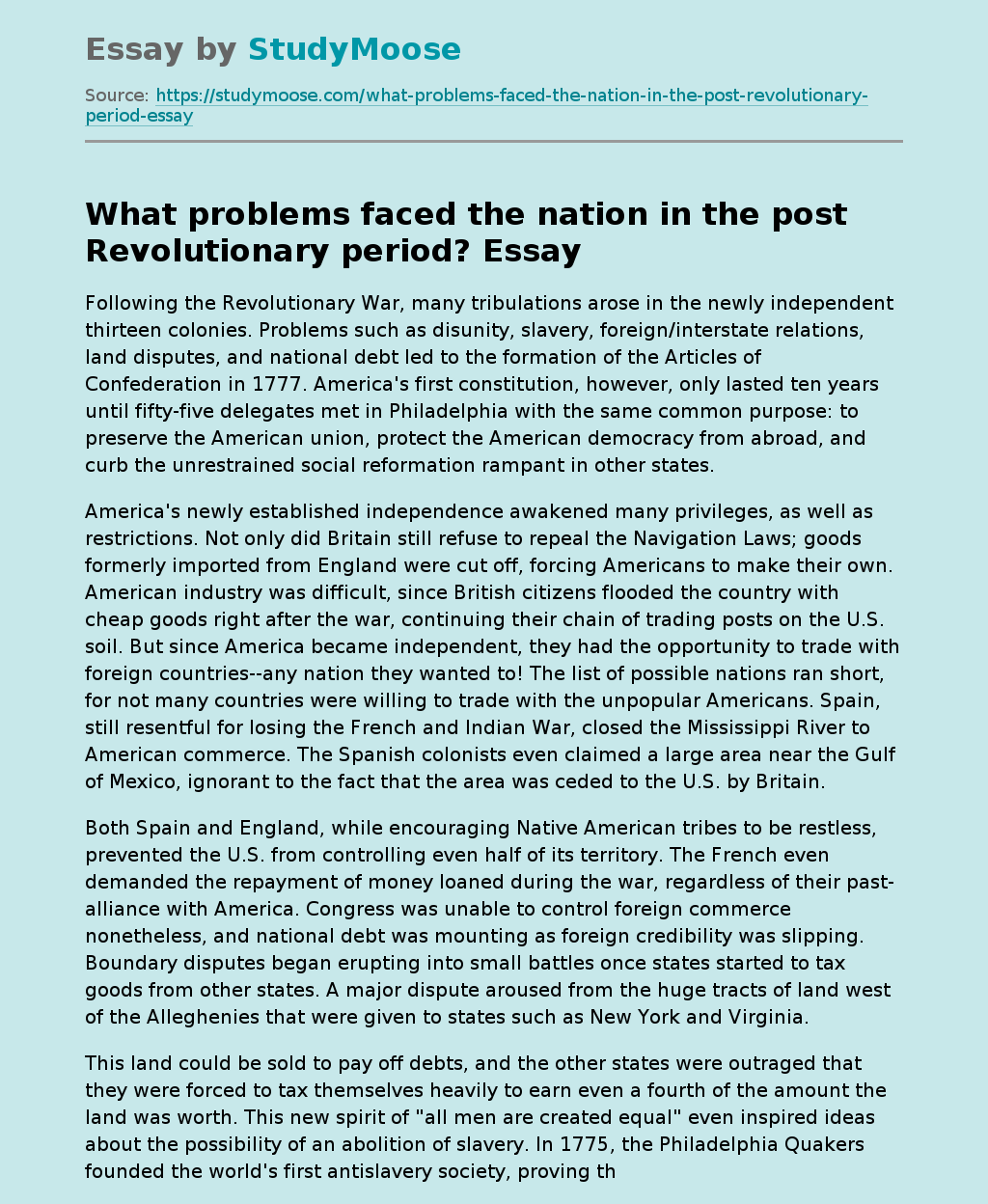