Conformity and non-conformity are two behaviors that serve vastly different functions in a society. The purpose of conformity in a society is to connect a group of individuals into a population that shares similar beliefs, attitudes, and thought processes. Non-conformity on the other hand is a way for an individual to stand out in a crowd as a unique person with a strong sense of self. It is important for a person to have a good balance of both of these behaviors if he or she wants to be part of a group while still keeping a unique identity to represent his/her opinions.

Don't use plagiarized sources. Get your custom essay on
“ What Motivates Nonconformity? ”
Get custom paper
NEW! smart matching with writer

In this essay, I will give examples of conformist behavior where I’ve changed my behavior to accommodate others as well as times where I’ve gone against the accepted ideas and actions of my society.

First, I’ll start with my personal thoughts on conformity. Conformity when used in moderation allows someone to align with a group and reap the benefits of being associated with that group.

In a broad scope, this could extend to a person conforming to the laws of a country and being allowed to live there and prosper. An example in my life for a broad scale of conformity is that I am a refugee who was persecuted in my own country and by conforming to the rules and laws of the US, I was granted asylum. This example signifies the great necessity for a person to have at least some degree of conformity.

If a person were to rely only on non-conformity, then the society they are a part of would not accept them and they would not gain the benefits that come with being a part of that society.

Conformity doesn’t have to be limited to only a broad view. In a smaller scope, conformity can simply be the following of social cues and norms. A handshake, holding a door open for someone, or even putting aside your own views to get along with someone are all forms of conformity. A personal example of small-scale conformity are the times where I have gotten together with a group to study instead of studying on my own. By conforming to the group’s attitude of making sure everyone gets the topic, I myself learned more about the material by teaching and learning from others. Of course, this is one of many examples I can give for small-scale conformity, as I mentioned before social cues that we use on a daily helps identify us as part of a larger culture or population.

Non-conformity is also an important behavior that must be used incorrect amounts. When an individual displays non-conformist behavior this does not mean that they are shunned by society. On the contrary, a society of people is made up of individuals who all have their own political views, cultures, and general opinions on the world around them. It is crucial for a society to have a minority that goes against majority-accepted beliefs and practices. If this wasn’t the case a society would be homogenous and dull with no one adding anything unique to a conversation. One of the biggest examples of non-conformity in my life is my hijab (headscarf). The majority of America is made up of followers of Christianity. It is hard to look at someone and identify a certain religion based on appearance alone. By wearing a hijab, I make it obvious to many people that I am a follower of the Islamic faith. While there are many Americans who are accepting of those of different faiths there are also those who strongly oppose any cultures or religions that aren’t theirs. By not conforming to the majority appearance of a woman I get identified with the Muslim minority. The reason I do this is to keep a personal sense of identity among the members of society. I still function as any other resident of the US by conforming to laws and social rules, but I also display my individuality of being a part of a minority religion.

It is important to note here that while non-conformity is important in moderation, there are certain situations where being a nonconformist can be detrimental to yourself and those around you. For example, if you are part of a group working on a project and the majority of the group has reached a consensus of what steps to take, it would be harmful to you and the group if you refused to follow the majority\’s choice. While it is important to put forward your own ideas on how to handle the problem, if you argue with group members you will lose time on completing the project.

Conformity also has a fine balance. If you conform to every aspect of society, you become a sheep whose own opinions and ideas are nothing but reflections of the people around them. This occurs in our society as well; people will play the music that they are not interested in because they know the majority of people will like it. Over-conforming to something can also be very harmful to those around you. An example that I have experienced happened when I was still in elementary school. A girl in my class was being bullied by a group of my friends. Instead of standing up for this girl I instead conformed to the group and didn’t say anything and watched as the bullying continued.

Some of the most influential leaders of our time have been nonconformists. These people saw flaws in their societies that went unaddressed and instead of joining the majority who accepted the standards they went against the accepted traditions. An an interesting aspect of non-conformity is that it can eventually lead to conformity. Take women’s suffrage as an example. The norm of society used to be that women weren’t allowed to vote, but a group of women who saw the unfairness of this went against this established law. In today’s society suffrage has become the norm, all because of the nonconformist behavior displayed during the time when it wasn’t allowed.

In conclusion, conformity and non-conformity are two behaviors that work in unison. When used in harmony they can be powerful social tools that affect your day to day life. If non-conformity is abused, then a person might end up as a social outcast who lives by their own set of rules and social standards. On the other hand, if someone conforms too much to society, they lose all sense of individuality and became a generally dull person. There are times where standing up for something that morally right outweighs the negatives of not conforming. 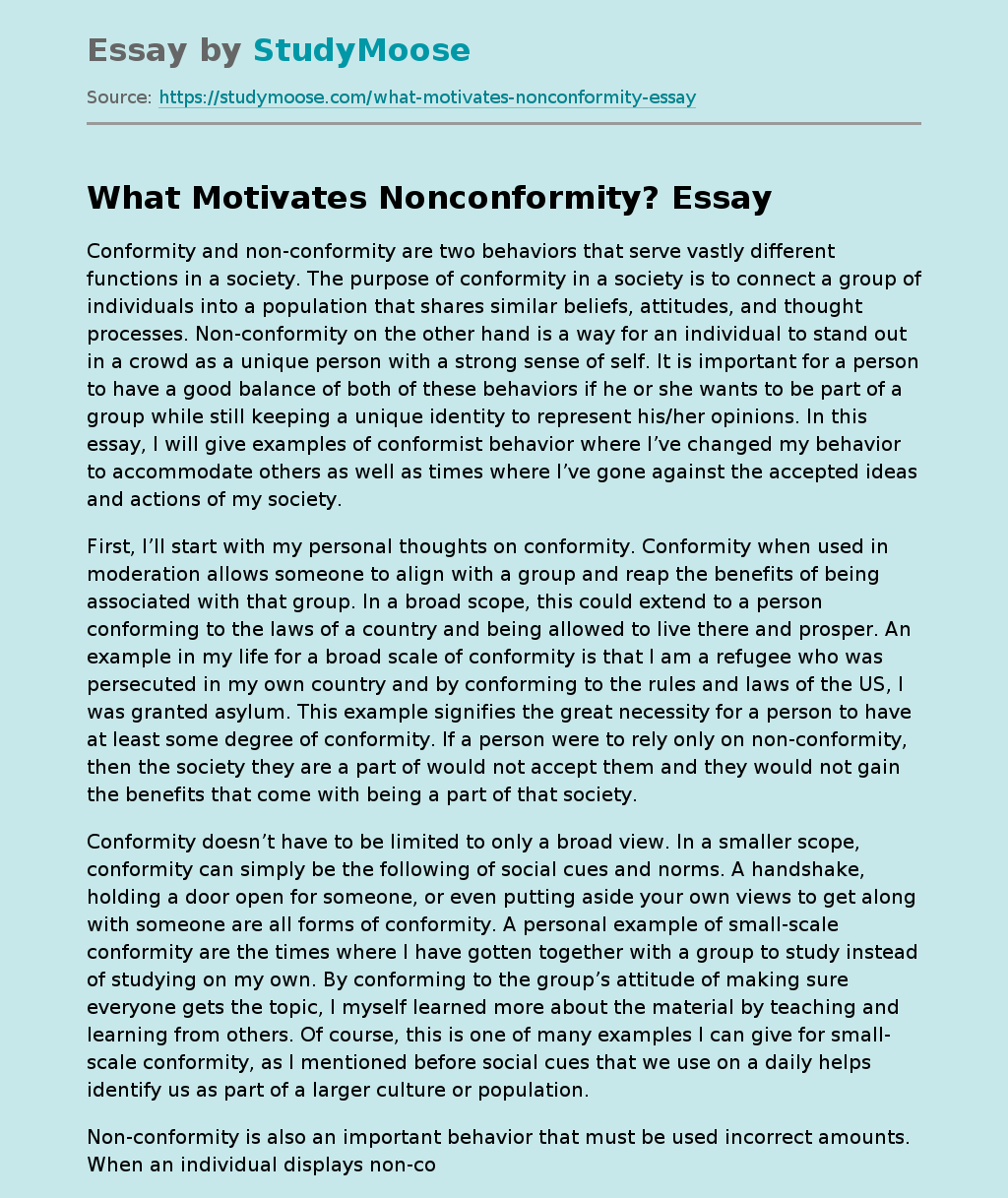