What Makes Watson The Perfect Partner to Sherlock Holmes?

Another thing that contributes quite a bit to their dynamic partnership is their similarities. Despite their differences, they are remarkably similar. For instance, they are both excitable and adventuress. The best example of Watson’s hunger for adventure emerges when he first hears of Holmes’ profession and cannot wait to assist Holmes. The only way to describe Watson’s excitement when hearing this news is that of a child on Christmas Eve waiting to get his/her presence. Equally important is his former career as an army doctor which has taken him far and wide, plus it means that he has seen his fair share of death and destruction.

Don't use plagiarized sources. Get your custom essay on
“ What Makes Watson The Perfect Partner to Sherlock Holmes? ”
Get custom paper
NEW! smart matching with writer

In A Study in Scarlet, he even remarks “I object to rows because my nerves are shaken” (Doyle. A Study in Scarlet: 26) Giving his time in Iraq, he is not afraid of violence, which is especially prevalent when Stamford tells him that Holmes is in the middle of “beating the subjects in the dissecting-rooms with a stick” (Doyle.

A Study in Scarlet, 19) When hearing of the brutal manner in which Holmes treats his evidence may lead the reader to entertain more sadistic, even morbid notions. Some may even go as far as to speculate that this mystery of man gets pleasure from torturing corpses. Readers also see Doyle’s fascination with the odd creature that is humans. By pointing this oddity out within Holmes puzzling character, he found that this may be the key to Holmes appeal. Holmes appeal lays in the fact that he is not like any common man one can bump into on the street.

Sticking to the theme of violence, when Watson experience Holmes violent outburst on a corpse, he does not seem faced quite the contrary. He seems fascinated by Holme barbaric behaviour.

As said once before, the former army doctor does not seem to affect when witnessing violence, but one thing there is interesting to note is that Watson sleeps with a service revolver which Watson takes out if need be. In continuation of this, Holmes brother Mycroft’s observation of Watson’s left hand when the veteran is under pressure he mentioned: “The war, Dr Watson do not haunt you. You miss it.” (McGuigan 2010: 38:45) So, according to Steven Moffat and Mark Gatiss interpretation of Watson, he is not a plagued by Post Traumatic Strees Disorder (PTSD) but rather an individual who misses the threat of danger thus feels right at home assisting Holmes on his cases. On the contrary, Holmes has applied his supreme intellect and knack for solving crime in order to deal with individuals of a particular nature and sticky situations.

In one specific case where Holmes and Watson balance each other ideally is when it comes to their fascination, bordering on addiction, of crime and adventure. In the newest adoration of the famous pair, there is a rather intriguing chat when they leave a crime scene, more specifically the scene of Jennifer Wilson’s murder:

Sherlock: Seen a lot of injuries, then. Violent deaths.

Sherlock: Bit of trouble, too, I bet?

John: Of course. Yes. Enough for a lifetime. Far too much.

Sherlock: Want to see some more.

This little chat shows onlooker two men who have found common ground and this commonality will be the foundation for a beautiful friendship. The central thing that brings these men together is their excitement and the thrill of solving the crime. Another thing to notice here is that Watson once more takes on the role of the apprentice by letting his master get plenty of opportunities to bathe in his glory. In certain scenes, these men may be seen as equals while in others, it is evident that this relationship is unequal. Moffat and Gatiss interpretation of Watson certainly does not deny the notion that the former army doctor is an adrenaline junkie looking for his next fix, this is especially prevalent in Watson’s last line “Oh, God, yes”. These three simple words underline an essential aspect of Watson character and his hunger for adventure. Here, is the first where the two adrenaline junkies recognise their shared interest in danger and the first is taken towards a purely pleasure-based relationship. As mention earlier, Watson already early on realises that Holmes is not as remarkable as first thought, and this is as clear as day when he notes down Holmes limits. In this instance, one may argue that Watson wishes the relationship to move from a pleasure-based one towards what Aristotle refers to as a “true” friendship. The reader, alongside Holmes, finally realises this significant shift in their relationship when they discuss the topic of arch-enemies at length:

Sherlock: What do real people have, then, in their real lives?’

Sherlock: Yes, well, as I was saying, dull.

John: You don’t have a girlfriend, then.

Sherlock: Girlfriend? No, not my area.

John: Mm. Oh, right. Do you have a boyfriend? Which is fine, by the way.

John: So, you’ve got no boyfriend, then.

This conversation tells the viewer quite a bit about the characters’ relations to one another going forward. Additionally, it shows that both men are willing to accept the other for who he is and caring for one another is a priority in order for this relationship to work. Also, this chat indicates where they have each other and how their quiet friendship may grow into something beautiful. Finally, this is the point on their friendship where it changes from being a purely pleasure-based relation to a truer one. Alternatively, to as Aristotle puts it: “To be friends, then, the must be mutually recognized as bearing goodwill and wishing well to each other.” (Aristotle 2016, 311) On the contrary, if one should put a more modern spin on it, one may look to Carlen Levigne who likens these gentlemen’s unlikely bond to the relations one encounters in “buddy cop” movies and shows. (Lavigne 2012, 17) Above this, he observes that the union of these two characters ends up being so close that all one needs to find out what the other knows are his facial expression.

Moving on to Holmes’ qualities, which may paint him as a not so pleasant individual, these include his tendency to be impolite and impatient. The following example will exhibit Holmes’ tendency to be self-important. His arrogance is put centre stage when he realises; he can trace the murderer through the pills used to commit the murders. But during this consultation one of the policemen mentions that they want more than mere theory and preaching. (Doyle. A Study in Scarlet, 156) Here, it is seen that Holmes expects that the other detectives have arrived at the same conclusion as he and this is especially prevalent when he remarks that: “Any delay in arresting the assassin might give him time to perpetrate some fresh atrocity.” (Doyle. A Study in Scarlet, 133)

Moreover, his arrogance shines through when it comes to the revealing of the murderer: “Gentlemen, let me introduce you to Mr. Jefferson Hope, the murderer of Enoch Drebber and Joseph Stangerson.” (Doyle. A Study in Scarlet, 136) In this instance, readers once again get to see Holmes deductive skills in all their glory when he tells his fellow investigators that a meek cab driver is this murderous mastermind. He ties this mystery together by first explaining that the best way to follow his target is to become a cab driver. At the crime scene of Stangerson’s murder, he notices the word “RACHE” scratched across a bare surface in the room where the murder as mentioned above took place. It was also within this room that he discovered the last piece of the puzzle, the pills. On top of this evidence, Holmes argued that Hope was a foreigner and thus did not see the need for a name change

. When he finally called the cab driver in, he did not expect any harm to come to himself and the people surrounding him. The reason why some may see this reveal as a sign of Holmes arrogance is the way he presents his line of reasoning and finally when he dares to call upon the murderer, himself, Mr. Hope. Holmes’ arrogance pairs perfectly with other characteristics which make Holmes somewhat easier to approach. Martin A. Kayman describes the Holmes presented to one in Doyle’s iconic tales as an intellectual, he [Holmes] has no cultural pretensions, and is always eager for action. He remains intimidating, frequently brusque, arrogant and aloof, but he is never morally repulsive. (Kayman. 2003: 49) Here, Kayman points out several of Holmes’ characteristics but like many of his fellow academics he tends to attack Holmes’ hunger for action and how his intelligence may seem intimidating at first.

Additionally, his supposed supreme intellect makes him seem arrogant and his tendency to be direct may scare individuals away, yet he is not depicted as being disgusted by his so-called colleague’s average intelligence. Holmes often seem to come off as an uncaring individual due to his sense of self-importance yet when it comes to his clients, Holmes frequently displays a sympathetic concern about the outcome, particularly in family matters, and lets his mask slip often enough to persuade us of the, albeit eccentric, humanity within. (Kayman 2003, 49) As Kayman mention earlier Holmes have a tendency to be blunt, but he does have a caring side. Although his caring nature does not surface often it gets its time in spotlight when it comes to his clients family matters and his clients well-being overall. Through his interactions with his clients, readers acknowledge the fact that Holmes has a softer side and thus is not as cold as initially thought. Holmes’ softer side, along with others, needs to balance to a T with his less agreeable qualities in order for Watson to find Holmes’ eccentricities acceptable. At times of hardship, Watson turns to Holmes’ uncreatable mind in order to cope with how Holmes behaves in a social situation.

What Makes Watson The Perfect Partner to Sherlock Holmes?. (2019, Nov 15). Retrieved from https://studymoose.com/what-makes-watson-the-perfect-partner-to-sherlock-holmes-essay 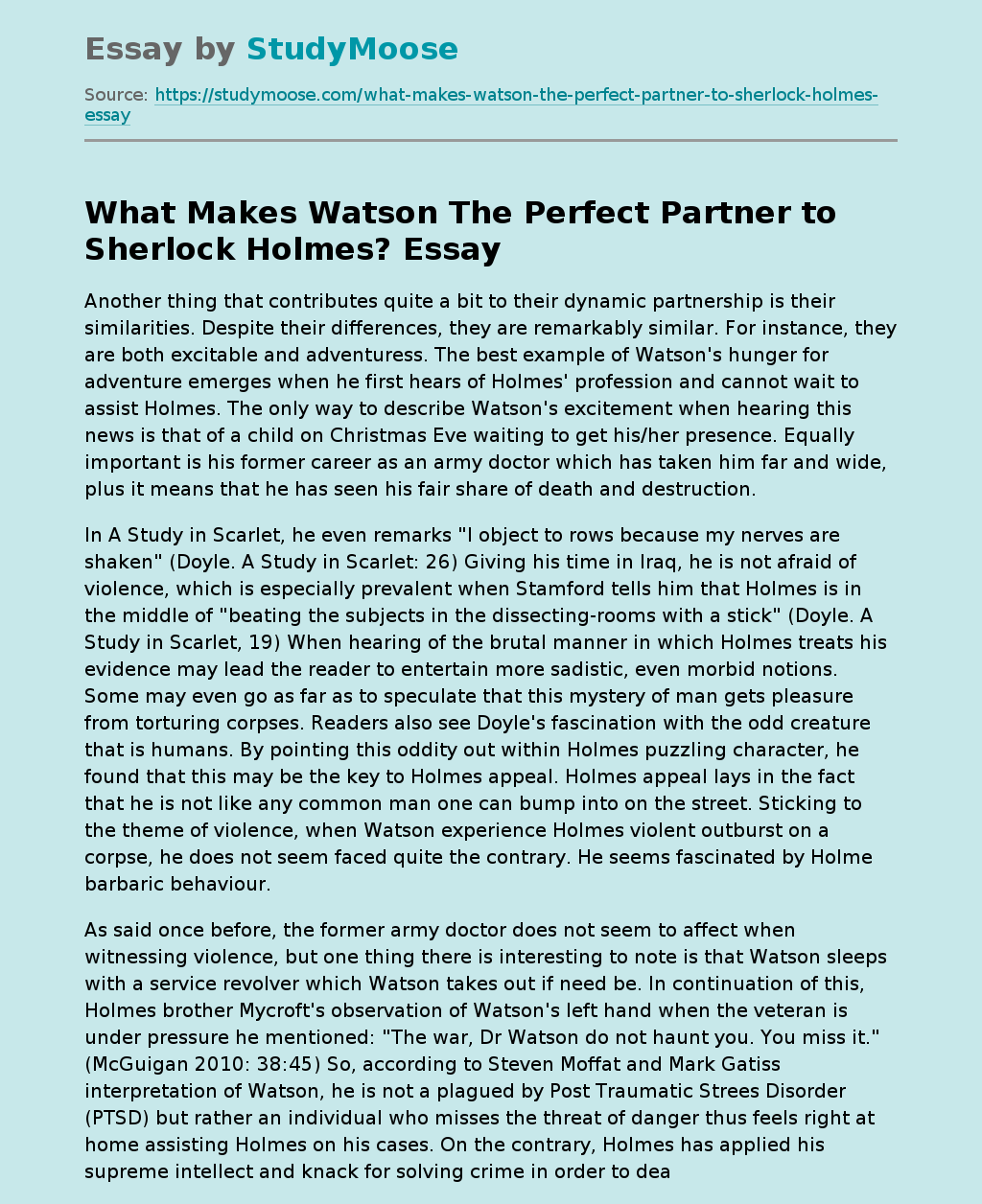